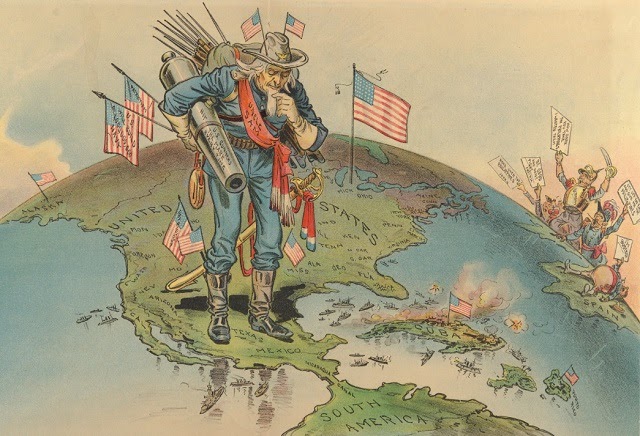 This is reality, not a conspiracy. It is to look comparatively at one’s position in relation to others and to assess where one stands.

Russia and China are no match for the instruments of national power of the United States. The existence of the Pale Blue Dot is threatened if nuclear weapons are employed by either or both parties.

US military, political and economic support for Ukraine has little to do with genuine concern for the lives of the Ukrainian people. They are just cannon fodder for the larger goal of ensuring that there will not be a multipolar world that undermines American power or seriously challenges the hegemony of the American dollar as it is today. today. In addition, the United States, as an Empire, with a capital E, seeks to continue to expand its military alliances through the North Atlantic Treaty Organization (NATO), forcing the United States competing nations to avoid state-sponsored violence against US NATO allies. It seems likely that NATO will continue to expand with Sweden and Finland expected to sign next, and NATO’s expansion beyond Europe to include countries in Asia is already well underway.

Nikkei Asia reported on April 8, 2022 that “NATO members agreed on Thursday to increase ‘practical and political cooperation’ with Australia, Japan, New Zealand and South Korea, in response to China’s failure to condemn Russia’s war in Ukraine. “We have agreed to intensify cooperation with our partners in the Asia-Pacific, as the crisis has global ramifications,” NATO Secretary General Jens Stoltenberg told a press conference, concluding two days meetings of foreign ministers of the military alliance. The four Asia-Pacific countries have been invited to attend the NATO gathering in Brussels. China’s reluctance to condemn Russia and Beijing ‘join[ing] Moscow’s questioning the right of nations to choose their own path “represents “a serious challenge for all of us,” Stoltenberg said.

The year 2022 will be seen as a time when the United States of America – after suffering an embarrassing military defeat in Afghanistan; military and political setbacks in Iraq, Libya and Syria; leveling cities in Iraq and Syria in pursuit of ISIS (eg Al Raqqa with the killing of thousands of civilians in the process); and succumbing to a powerful political lobby (Israel) that seeks to thwart a peace process with Iran – has decided to hide in a barn with Russia and China and crush their vision of an alternative monetary system and of a center of power to challenge the United States.

The game is on, well underway.

At home, the US scene is plagued by high inflation, supply chain issues, 1 million deaths linked to the COVID pandemic and a political divide that sees 73 million supporters of the former President Donald Trump claiming the man to run for president in 2024. President Joe Biden appears to be visibly mentally degrading as footage of him seeking to shake hands with people who aren’t there, wandering aimlessly after speeches and dangerously straying from the script, causing people to wonder who, really, is in charge of foreign and domestic affairs.

Yet with all its internal and external woes, Jeff Bezos and Elon Musk are getting richer, the nuclear triad is modernizing, the Pentagon’s budget exceeds $1 trillion (with all its subsidiaries), and social welfare programs continue to fail. be reduced, all the time the stock market finds ways to profit from the Russia-Ukraine conflict and various global sufferings.

This is reality, not a conspiracy. It is to look comparatively at one’s position in relation to others and to assess where one stands. Americans like to think it’s always morning in America. It’s not. History, current affairs, global perceptions, all of this must be studied to get an idea of ​​current events and to try to better guess those to come. This is not “whataboutism” as many like to claim.

Smart money relies on the United States to pull off this new vision quest: knocking Russia and China down several notches. Indeed, the United States possesses Instruments of National Power (INP) that together no nation or group of states can successfully challenge. Oh, there may be a debacle in Vietnam or Afghanistan from time to time, but those are setbacks, not defeats, in the minds of American political, military, and economic leaders.

The INPs are: Diplomacy, Information, Military, Economics, Finance, Law Enforcement, Intelligence, and People (or Human Capital) – DIMEFLIP for short. It is absolutely essential to understand the breadth of these tools which, taken alone, are powerful enough, but together have not been matched in recent times. INPs should be studied by critics and promoters to understand how the United States wields its power both abroad and domestically. They can be found on the World Wide Web as appendices to US Army Special Forces Unconventional Warfare, 2008, publication 3.05-130. Find them and read them carefully.

The United States employs most of its INPs in the Russia-Ukraine conflict. An aggressive diplomacy bringing together a large part of the nations of the world to sanction and condemn Russia. Superb use of the information realm, especially Military Information Support Operations (MISO) to shape global and American opinion to uncritically support Ukraine. Partial use of military power to provide Ukraine with advisers, training and weapons. Economics and finance INPs used to cut Russia off from SWIFT and impose punitive sanctions, as well as encouraging US defense contractors to increase arms production specifically for the ‘Ukraine. The intelligence services were used to conduct ISR airborne operations around Ukraine’s borders to spy on Russian troop and weapon movements, as well as CIA agents on the ground. Law enforcement used to threaten Russian President Putin with war crimes or extradite Julian Assange to the United States, or claim legal authority for torture, false imprisonment or war. Finally, people or human capital as citizens, or aliens, are needed to fight and die, build weapons, support wars, and believe in the American way of life and exceptionalism.

Nuclear weapons, you say? Well, the US has a first use policy but doesn’t talk about it like Russia does. According to Armscontrolcenter.org, “Current US policy does not limit the President’s ability to order a nuclear strike for any reason at any time. The military can reject an order that is perceived to violate the laws of war, and there are legal concerns about the role of Congress authorizing the use of force, but overall the president can throw weapons nuclear when and if he/she chooses to do so.

China talks a good game supporting Russia in the media, buying up its resources and companies, but it refuses to intervene militarily and fight to enter the fight. Russia bears the full burden of the larger goal of creating an alternative world order to that of the United States that includes the BRICs, a non-dollar-denominated universe and a counterbalance to American power. Russia’s hand was forced by America’s NATO push into Ukraine, but that now seems to be a distant memory as World War III looms, and the exact causes should be left to historians.

Nobody can predict where Russia will lead against Ukraine and USA/NATO. Russia’s early combat operations in Ukraine, as reported by the pro-Russian sites Southfront and the Coronation Vineyard, left much to be desired, but the authors of those sites believe that Russia will adapt quickly.

We end with the famous astronomer Dr. Carl Sagan and an excerpt from the Pale Blue Dot (PBD), the PBD being the Earth seen from a Voyager satellite four billion kilometers away.

“Earth is a tiny stage in a vast cosmic arena. Think of the rivers of blood shed by all those generals and emperors so that, in glory and triumph, they might become momentary masters of a fraction of a point. Think of the endless cruelties inflicted by the inhabitants of one corner of this pixel on the barely distinguishable inhabitants of another corner, the frequency of their misunderstandings, their desire to kill each other, the fervor of their hatreds … Our postures, our imagined self-importance, the illusion that we have a privileged position in the Universe, are challenged by this point of pale light. Our planet is a solitary blot in the great enveloping cosmic darkness. In our darkness, in all this vastness, there is no indication that help will come from elsewhere to save us from ourselves.

The Kurdish region’s dam projects a new dispute with the Iraqi central government.