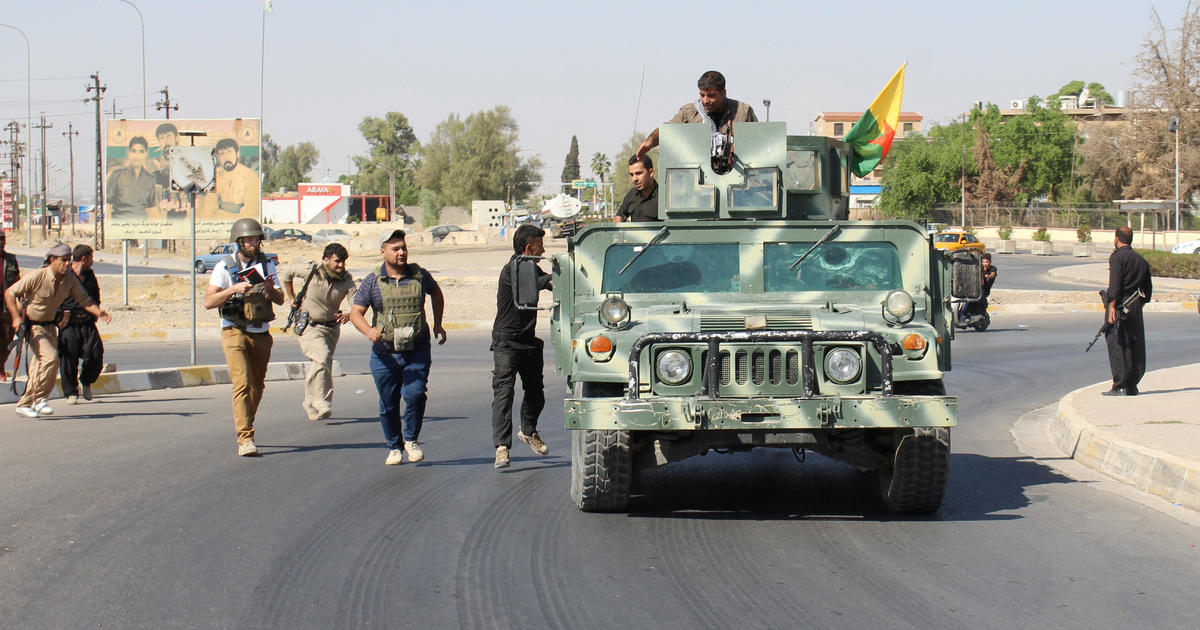 KIRKUK, Iraq — Two weeks after fighting together against the Islamic State of Iraq and Syria (Islamic State), Iraqi forces pushed their Kurdish allies out of the disputed city of Kirkuk on Monday, seizing oil fields and other facilities amid rising tensions following last month’s Kurdish vote for independence.

The decision of the Iraqi army and its allied militias so soon after the neutralization of ISIS in northern Iraq hinted at a country that could again turn against itself after having rid of a common enemy.

President Trump expressed disappointment that the two sides were fighting, but stressed that the United States was not seeking to openly take sides in the dispute.

“We don’t like the fact that they’re fighting each other. We’re not taking sides,” Trump told reporters at the White House on Monday. “We have had very good relations with the Kurds for many years, as you know, and we have also been on the side of Iraq, even though we should never have been there. We never should have been there. be. But we are not taking sides in this battle.”

Civilians and federal troops pulled down Kurdish flags around the city. Kurdish Governor Najmaddin Karim, who remained in office despite being dismissed by Baghdad a few weeks ago, fled to Erbil, the capital of the Kurdish Autonomous Zone of Iraq.

Revelers waving the Iraqi national flag and the flag of its Turkmen minority flooded central Kirkuk during an evening celebration. But it was the sectarian Shia chants heard above the din of the rally that underscored the political battles to come between Iraq and its Kurdish region.

Iraqi forces have been backed – as they always are now in major operations – by the country’s Popular Mobilization Forces, a coalition of predominantly Shiite militias that the Kurds see as an instrument of Iranian policy.

In their bid to keep Kirkuk and its oil-rich countryside, Kurdish leaders stoked fears that the central government in Baghdad would be dominated by Tehran and would oppress the Kurds if they recaptured the ethnically mixed city.

Their fears were further heightened after Iran came out forcefully against the Non-binding referendum of the Kurdish region for independence on September 25, then closed its official crossing points to the region on Sunday.

Iraqi Kurds also remember the brutal campaigns carried out by Saddam Husseinitself an enemy of Tehran, against the minority, including a poison gas attack on the city of Halabja in 1988 that left thousands dead.

As Arab and Turkmen revelers celebrated the change of power in Kirkuk, thousands of Kurdish residents, fearing the federal government and the militia, crowded the roads north towards Erbil.

But Baghdad also looked suspiciously at its Kurdish partners. Prime Minister Haidar al-Abadi said he was reclaiming a city that was never within the legal boundaries of the Kurdish Autonomous Region.

When the Iraqi armed forces collapsed in the face of an Islamic State advance in 2014, Kurdish forces entered Kirkuk to secure the city and its surrounding oil wells. The city lies 20 miles from the Kurdish Autonomous Region in northeastern Iraq.

Baghdad insisted that the city and its province be returned, but things came to a head when Kurdish authorities widened their referendum to include Kirkuk. For Iraq’s central government, it looked like a provocation that underscored what it sees as unchecked Kurdish expansionism. The city of more than a million people is home to a mix of Arabs, Kurds and Turkmens, as well as Christians and Sunni and Shia Muslims.

Kurdish officials accused the Iraqi army of carrying out a “major multi-pronged attack” and reported heavy clashes on the outskirts of Kirkuk, but a spokesman for Iraqi state-backed militias said that they had encountered little resistance.

By noon, federal forces had moved into several large oil fields north of the city, as well as its airport and a major military base, Iraqi commanders said. The Kurdish party headquarters in Kirkuk had been abandoned.

The United States, which has armed, trained and provided vital air support to both sides in their common fight against ISIS, described Monday’s events as “coordinated moves, not attacks”, while lamenting the dispute as a distraction against a common enemy. He said the limited firefight was a “misunderstanding”.

After initial reports of clashes in and around the city, it appeared in the afternoon as if the vastly outnumbered Kurdish forces, known as the peshmerga, were retreating with barely a fight.

Local police remained in place in Kirkuk as al-Abadi urged officials to stay on duty. “We only acted to fulfill our constitutional duty and extend federal authority and impose security and protect national wealth in this city,” he said.

Brig. General Bahzad Ahmed, spokesman for the Kurdish forces, said federal forces seized an oil and gas company and other industrial areas south of Kirkuk in battles with Kurdish forces who made many victims”, without providing a figure.

He said Iraqi forces had “burnt many houses and killed many people” south of the disputed city. His claims could not be independently verified.

A spokesman for the state-sanctioned Iraqi militias said they had “achieved all our objectives” in retaking areas from Kurdish forces in and around the city. Ahmed al-Assadi said federal forces came under fire from “some rebels” after the operation was launched on Monday morning and returned fire. He did not say whether they suffered any casualties.

He said federal forces were deployed in the area of ​​the K-1 military base, Kirkuk airport and a number of oil fields and facilities. The Iraqi army said it seized two large oil fields outside the city.

Tensions have increased since the Kurdish referendum on Iraqi independence. The central government, along with neighboring Turkey and Iran, as well as the United States, rejected the vote.

The central government and the Kurdish autonomous region have long been at odds over the sharing of oil revenues and the fate of disputed territories like Kirkuk which are controlled by Kurdish forces but outside the autonomous region.

Al-Abadi said the militias will stay outside the city.

Baghdad has been exerting increasing pressure on the region since the referendum, pushing Kurdish leaders to disavow the vote and accept shared administration of Kirkuk.

Al-Abadi’s cabinet said on Sunday that fighters from the Turkish Kurdish insurgency, the PKK, were beginning to appear in Kirkuk, and he said this would amount to an act of war.

The fight against Daesh