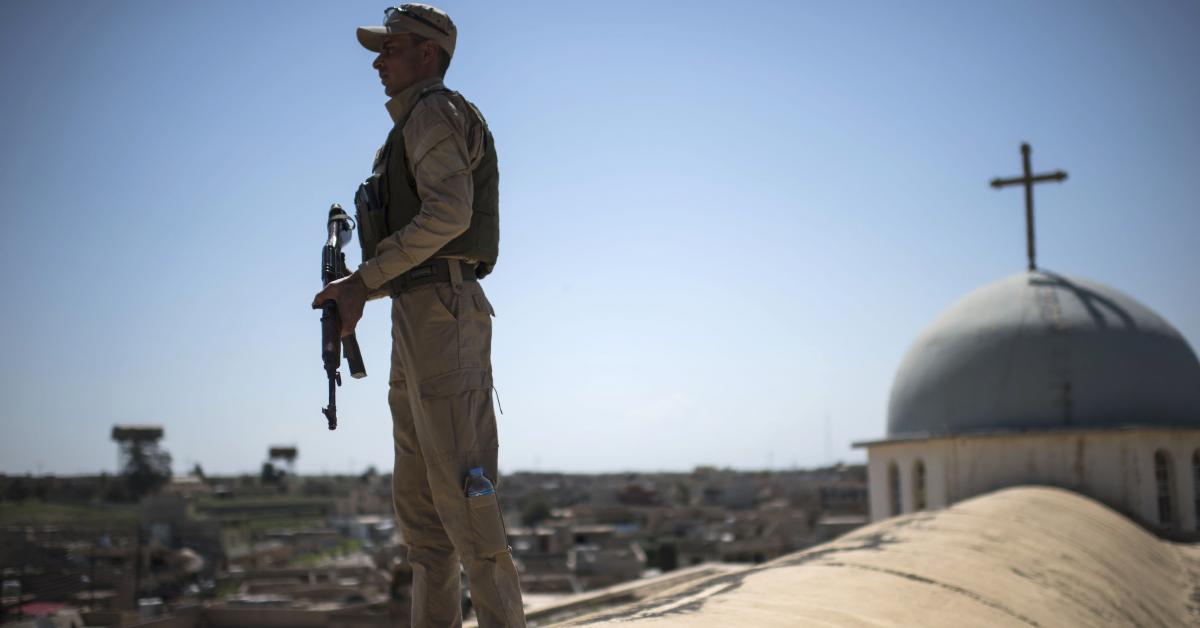 A little-noticed provision to arm Iraqi Christians in the house version of a defense bill to be passed inadvertently fuels unrest between rival militias in the Nineveh Plains, an Iraqi melting pot.

The non-binding provision, inserted by Representative Trent Franks, R-Arizona, a conservative Christian member of the House Armed Services Committee, notes “the important role of Iraqi Christian militias as part of the military campaign against [the Islamic State (IS)] in Iraq, and the specific threat to the Christian population. He calls on the United States to “provide weapons, training, and appropriate equipment to the controlled elements of the Nineveh Plains Council,” a board proposed by Assyrian factions but with no guarantee of training.

Ever since ISIS swept Iraq and began its genocidal campaign, forcing thousands of Assyrian Christians to flee the Nineveh Plains in 2014, Washington has channeled military support to Iraqi sub-state militias through the government. central Baghdad. While ISIS has now been largely ousted from the plains of Nineveh, the group still poses a threat to surrounding areas.

Franks told Al-Monitor he inserted the language in the hope that the Defense Ministry would use it to bypass Baghdad and provide direct military assistance to favored Christian militias.

Assyrian Christians, however, are a diverse mosaic of minority groups in the Nineveh Plains, which lie northeast of Mosul, adjacent to Iraqi Kurdistan. Kurdish peshmerga have occupied part of the Nineveh plains since the overthrow of ISIS in collaboration with local militias and Iraqi security forces.

â€œNo legislation in the US has ever helped us, unfortunatelyâ€¦ I think some of it must have been done with good intentions, but it never resulted in any benefit on the ground. “

The presence of Kurdish forces in the Nineveh Plains has exacerbated existing political tensions between Assyrian Christian groups that date back years before ISIS exercised control over the region. The Nineveh Plain Forces, a coalition of Christian militias fighting alongside the Peshmerga, support the Kurdistan Regional Government (KRG), while the rival Nineveh Plain Protection Units (NPU) support the transformation of the plains of Nineveh into a separate administrative unit under the auspices of central Iraq. government.

“The problem with the militias in the Nineveh Plains is that in many cases they deny who they are supported by, and they usually have no formal connection to the Kurdistan region,” Michael Knights, Lafer member of the Washington Institute for Near East. Politics, told Al-Monitor. “They are in theory an autonomous militia, but the money comes to them, the weapons come to them from the Kurdistan region.”

Anti-KRG Assyrian groups, on the other hand, fall under the state-sponsored Popular Mobilization Units (PMU), a large group of predominantly Shiite militias that formed as a result of the evaporation of the Iraqi military. as ISIS swept the country in 2014.

“Some of them [PMU], they’re Christian militias in theory, but in reality they have a whole bunch of Iranian-backed Shia terrorists working alongside them, â€Knights said.

The NPU insists that it does not receive support from Iran and that it has joined the PMU so that its fighters receive salaries from the Iraqi government.

“There is absolutely no connection with Iran,” NPU chairman Yacoob Yaco told Al-Monitor. “If there had been any of these concerns or issues, the US military would not have trained us and conducted missions in coordination with us.”

The NPU and its political wing, the Assyrian Democratic Movement (ADM), strongly oppose Franks’ arrangement on the grounds that it would only supply arms to rival Christian militias allied to the Kurds.

The problem is Franks’ reference to supplying arms to “controlled elements of the Nineveh Plains Council”. The NPU believes the reference to the Nineveh Plains Council came from a policy document that pro-Kurdish Assyrian factions agreed to at a June conference in Brussels, convened by MEP Lars Adaktusson. ADM rejected the document on the grounds that it exerts undue influence over the KRG at the expense of the Iraqi central government.

â€œIf the goal is to support local control of Assyrians and other ethnoreligious minorities in the Nineveh Plain, then this advice, as currently offered at the Brussels conference, should be rejected,â€ Elmer said. Abbo, Chairman of the Ninevah Plain Defense Fund, a US-based nonprofit that raises funds for the NPU. “It is the political annexation of the Nineveh Plain that, over time, would create the conditions for a formal annexation of the KRG.”

All of this is taking place against the backdrop of a September 25 referendum on the independence of the Iraqi Kurds. While the KRG has come under heavy criticism for including the contested oil-rich Iraqi province of Kirkuk, it remains unclear whether the KRG will organize voting in areas of the Nineveh Plains under its control. The KRG delegation in Washington did not respond to an Al-Monitor investigation into the matter.

“Many of themâ€¦ have an Iraqi nationalist outlook and they are used to dealing with Baghdad rather than the Kurdistan region.“

Anti-KRG Assyrians have pointed to the KRG’s replacement of the mayors of two Assyrian-majority towns, Alqosh and Tel Keppe, with pro-KRG mayors as further evidence of Kurdish interference in the Nineveh plains. While thousands of Assyrian Christians have fled to Iraqi Kurdistan, many believe that the best solution for the Nineveh Plains is to seek greater autonomy under Baghdad rather than being part of the KRG.

â€œThey, as a minority in Iraq, have been treated relatively wellâ€ under former President Saddam Hussein, Knights said. â€œA lot of them have some sort of Iraqi nationalist perspective, and they’re used to dealing with Baghdad rather than the Kurdistan region historically. “

Knights also noted: â€œIn Kurdistan there has been a major economic crisis for a number of years and people are not being paid regularly, while [Baghdad has] continued to pay their wages straight away during the current economic crisis.

The House has already passed the Franks-language defense bill on Iraqi Christians, but the provision is not included in the Senate version of the bill, which is expected to be voted on in the House. Monday ground. The two chambers will have to agree on a final version, and Abbo believes the language is unlikely to survive the reconciliation between the two versions. â€œAmerican policy has always remained away from active engagement to support the survival of ethnoreligious minorities in Iraq,â€ he explained.

Indeed, Rep. Jeff Fortenberry, R-Neb., Added an amendment to last year’s defense bill which would have empowered “the local security forces in Iraq – including minority ethnic and religious groups – to deter, detain or roll back [IS]. “However, this provision was not incorporated into the final version of the bill.

Yaco of the NPU also denounced the lack of direct support from the United States.

â€œNo legislation in the United States has ever helped us, unfortunately,â€ Yaco told Al-Monitor. “I think some of it must have been done with good intentions, but it never resulted in any advantage on the pitch.”

He added, â€œI invite all members of the United States Congress to come to the Nineveh Plainâ€¦ from us directly and not through foreign entities.

Franks, who has also advocated for the direct arming of the Peshmerga, acknowledged the tension between Assyrian factions but argued that direct military support would be enough to rally anti-KRG Christians.

â€œI understand that dynamic, and Christian groups, if they know they can get direct support, I think, will definitely embrace it,â€ Franks said. â€œThe Kurds understand that I support them 1000%, and I also support Christians. “

In the past, Franks said, Baghdad has suspended military assistance to non-state groups, including the peshmerga, even as they fought for their lives against Islamic State.

“I am convinced that if we try to get it through conventional channels, a lot will never get there … and that the end result will be that a number of Christians will die and even more will be scattered. ” he said.

Knights acknowledged the problem, but argued that US pressure on Baghdad ensures that military aid ultimately gets to where it is intended.

Apart from the wider disputes between the KRG and Baghdad, Knights also questioned the general wisdom and effectiveness of bypassing the Iraqi central government when providing military assistance to non-state forces.

â€œIt only really works if you lock Baghdad in there,â€ Knights said. “If you don’t, you really upset people in Baghdad and that’s the very last thing we have to do before the Iraqi election in 2018 when we hope the pro-American guy wins.”