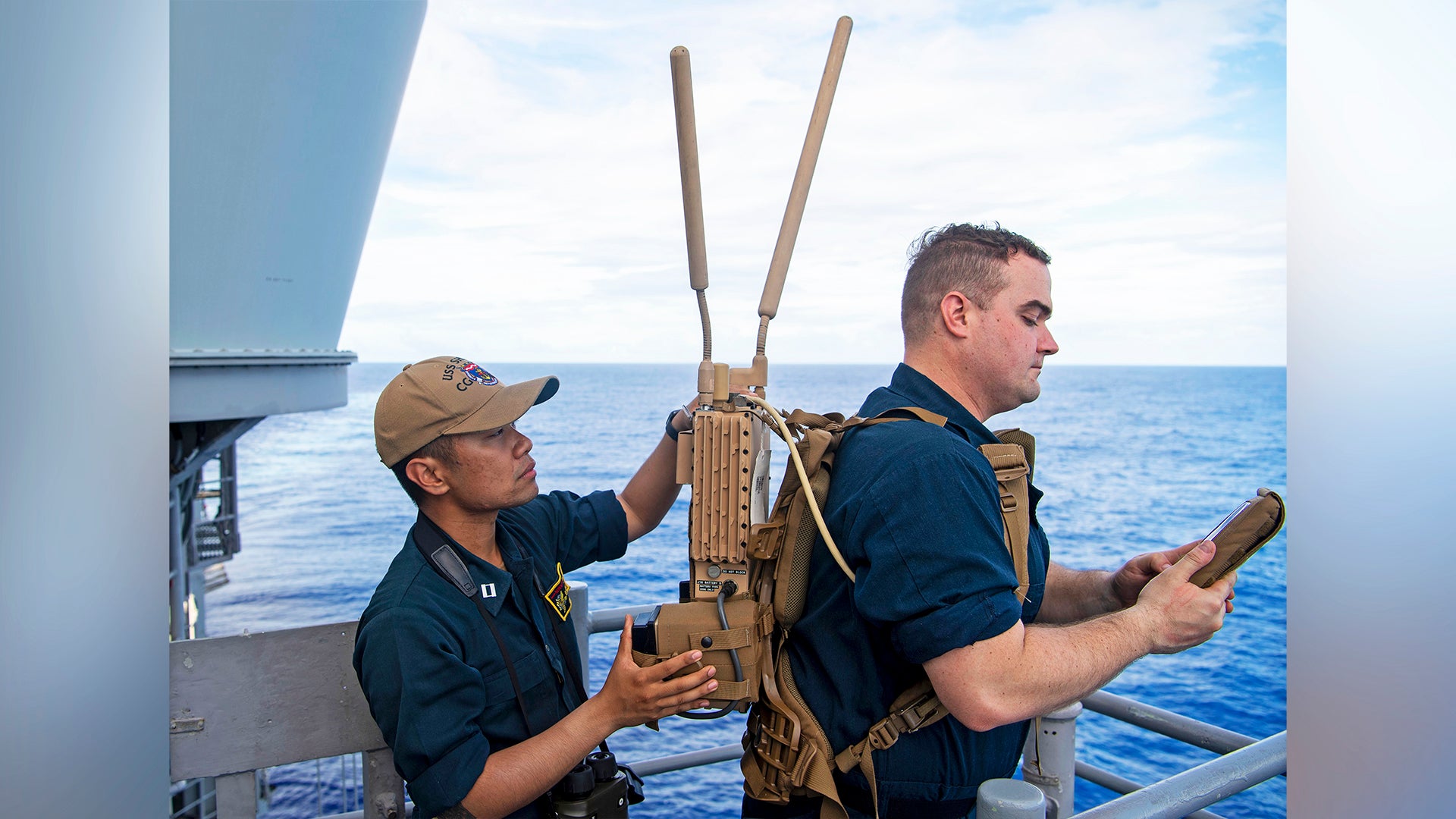 In its modern naval context, DRAKE continues to be a low-end threat oriented tool. Speaking to USNI News Late last year, Gunner’s mate Kyle Mendenhall explained that “anybody these days can kind of just buy a $1500 drone. … The Navy saw a very great need to have something to defend against something so simple that is so common these days.

The DRAKE device essentially acts as a jamming system that interferes with frequencies commonly used by low-end drones. The relatively simple system can be used as a basic countermeasure, especially in situations that require a quick reaction. Mendenhall explained to USNI News“If we meet a [drone] that gets to the front of the ship near the jib’sle and then it just decides to lock up and go aft to the flight deck I can just pick up this backpack I can run to the flight deck and I’m still blocking that signal to make sure the drone stays away from us.

Mendenhall further explained that using the system requires authorization from the ship’s commander, but it can also be used in response to a threat, telling reporters: “If it’s something that we consider a threat, I can activate it without much problem, and I’ll basically fill the chain of command.

DRAKE’s simplicity also likely limits its usefulness against more sophisticated threats. Drones using autonomous guidance systems or otherwise hardened against jamming attacks are unlikely to be successfully countered by anything like DRAKE. However, because the device uses specific radio frequencies that Group 1 drones typically use, it is also less likely to cause unintended interference with the vessel’s own systems. In short, DRAKE is specifically designed to stop a low-end drone that is manually operated via continuous RF control.

The effectiveness of Department of Defense CUAS platforms against more sophisticated threats has been a pressing and open question for some time. In July 2019, the same month as the initial swarming incident, the Under Secretary of Defense for Acquisition and Sustainment asked for an evaluation performance of 28 counter-drone systems used in the army. DRAKE was among those tested.

Following this request, the service branches and the Office of Operational Tests and Evaluation of the Secretary of Defense conducted extensive countermeasures evaluations. These tests focused exclusively on Group 1 low-end drone threats. Their joint findings highlighted that while detection capabilities are adequate for most systems, defeating drones remains a challenge.

These conclusions come with a number of important caveats. Group 2 drones were not available in time for testing in 2020, and more sophisticated drones were considered beyond the scope of testing. The assessment notes that swarm threats have simply not been taken into account. These testing gaps were explicitly identified in the results, along with further recommendations to address more sophisticated drones and swarm tactics in the future.

Given that the request for evaluation took place around the same time as the swarm events, it appears that the MoD could not have had a rigorous evaluation of the effectiveness of its various swarm technologies. counter drones. Perhaps more concerning, the review noted that disabling even the most limited Group 1 devices was a challenge on a large number of systems.

Based on their endurance and use of multiple aircraft, the aircraft involved in the 2019 incident are unlikely to qualify as Group 1 low-end drones. Given that the bridge log reference to DRAKE system shutdown appears at the end of a long, fully retracted section of the logs, it is impossible to know what specific role or impact DRAKE played in these events. These removals may well be in place to protect the performance of the countermeasures employed, in particular DRAKE. It’s also worth repeating that it’s not yet clear if DRAKE was used by “ghostbusting teams” or if there were separate systems in play. As we noted earlier, the moniker of “ghostbuster” is common among a number of handheld CUAS devices as they often use large backpacks reminiscent of the ghost hunter movies. Indeed, DRAKE’s photos show a large backpack with very prominent antennae.

Whatever his role in the 2019 incident, DRAKE is an ongoing program. A recent presentation of the Navy listed DRAKE among electronic warfare efforts against radio controlled IEDs.

The slides detail a new “DRAKE 2.0” which will incorporate improved radios and software systems. These upgrades will include a docking station that will allow the system to better integrate with the vessel.

As it stands, this subtle hint in the deck logs shows that the Navy deployed handheld CUAS systems in connection with these incidents. Although we have contacted Navy public affairs officials for further information, it is Department of Defense policy not to comment on incidents such as these. For now, the Freedom of Information Act documents remain an essential if limited window into these events.

$300 loans offer a lifeline – and an apprenticeship – for students – archyde