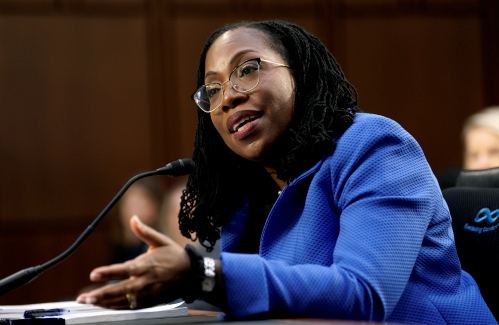 John Buttrick of Concord can be contacted at [email protected]

I write on a gray and rainy morning in March. Another day, I might greet it as a taste of warm April showers watering the new spring shoots. But today it chills my bones and foreshadows another harrowing day of a fumbling Senate hearing with Supreme Court-appointed Justice Ketanji Brown Jackson.

Before the start of the hearing, political analysts suggested that the hearing would be more political theater than a process of reviewing his qualifications, skills, methods and jurisprudence. It seems they were accurate. Lindsey Graham, Josh Hawley, Ted Cruz and a few others used much of their time to present their positions on selected issues and then sought Judge Jackson’s concurrence. If she disagreed or maintained political neutrality, her responses were used to disparage her character and/or her ability to be a fair judge on the Supreme Court.

We’ve heard sickening opinions from Republican senators about Judge Jackson being soft on criminals, giving light sentences to child sex offenders, defending terrorist prisoners at Guantanamo Bay, and even suggesting that religious commitments could cloud his judgment. Lori Ringhand, lawyer, reports in the New York Times“One thing that is striking about this hearing is how little effort we see to engage the nominee on her perspective on real legal issues.”

Indeed, the April showers will soon wash away the detritus hidden under the winter snow revealing new growth. The hearing is over. However, beneath the accumulation of this slanderous auditory antics lay a demonstration of two stumbling blocks to effective communication. Their questions contained the suspicion that true answers are rarely provided voluntarily and also, confusion about the ways of war.

The first stumble assumes that honesty and truthfulness are rare commodities in the daily lives of lawyers, politicians, business executives, and diplomats, to name a few. Therefore, some Republicans’ questions projected their assumption that honesty and truthfulness should be coerced or tricked out of the candidate. It is ironic that these senators used their talent in the political art of equivocation to demand transparency from Judge Jackson.

The shape of their own opinions called for caution and restricted open-minded communication. Whereas expecting honesty would have communicated respect. Respect invites to tell the truth. The stumbles of this hearing revealed the need to seriously seek ways to communicate honestly and tell the truth in a world dominated by conspiracy theories, lies and equivocation. The effort begins with building a culture of trust and mutual respect. There is even a precedence for this: “Do unto others as you would have them do unto you.”

The second hypothesis, demonstrated indirectly during the hearing, was the confusion over the concept of war. Senator Lindsey Graham (RS.C.) has suggested that the work assigned to Jackson to defend detainees held without charge or trial at Guantanamo Bay jeopardizes the national security of the United States. He said: “If you try to do this in World War II, they will run you out of town.

The obvious assumption is that the United States is at war and therefore the detainees are prisoners of war who must be detained while the war continues. Senator Graham added: “Detainees must be detained forever! Judge Jackson replied, “Representing Guantanamo detainees was only about limits on executive power, not exonerating terrorists. Identifying these boundaries would help decide whether a detainee was a POW or a suspected criminal. The former can be held until the end of a war. The latter must benefit from a quick and fair hearing before a civil court.

The problem with these small wars is that they often fall short of the intended goal of quick and decisive victories. Instead, they turn into counterinsurgency, stability operations and/or nation building that last for years. Some examples include Russia and the United States in Afghanistan, Russia in Ukraine, Israel against the Palestinians, and the United States in Vietnam and Iraq. There are no obvious victories or endings.

In the United States, as the Senate hearing implied, there is no agreement on when the country is at war or when it will end. Does war continue as troops occupy a country for nation building? Is it war when only drones are used to kill suspected terrorists in their own country? Is it war when someone is arrested for shooting or bombing civilians in America? Is this person a war terrorist bound for Guantanamo or a criminal to be tried in civilian court?

If the country’s leaders cannot agree on when the country is at war, what happens to justice for the “pows”? What happens to a defendant’s Fourth Amendment “right to a speedy and public trial?” The health of American democracy depends on clarifying the response.

The US military maintains 750 US foreign bases in 80 countries and engages in ongoing counterinsurgency and nation building efforts. The nation needs in-depth study to understand and define the parameters of contemporary small wars. Without them, democracy will weaken and justice through American courts will be undermined.

The Senate hearing to consider the nomination of a Supreme Court justice may have been painful to watch. But it can also be redemptive as a motivation for reform. Our mission, if we choose to accept it, is to become a people who await the truth of others and a nation who awaits the end of war. Just imagine neighbors and nations meeting our expectations.

Political parties will not liberate Palestine