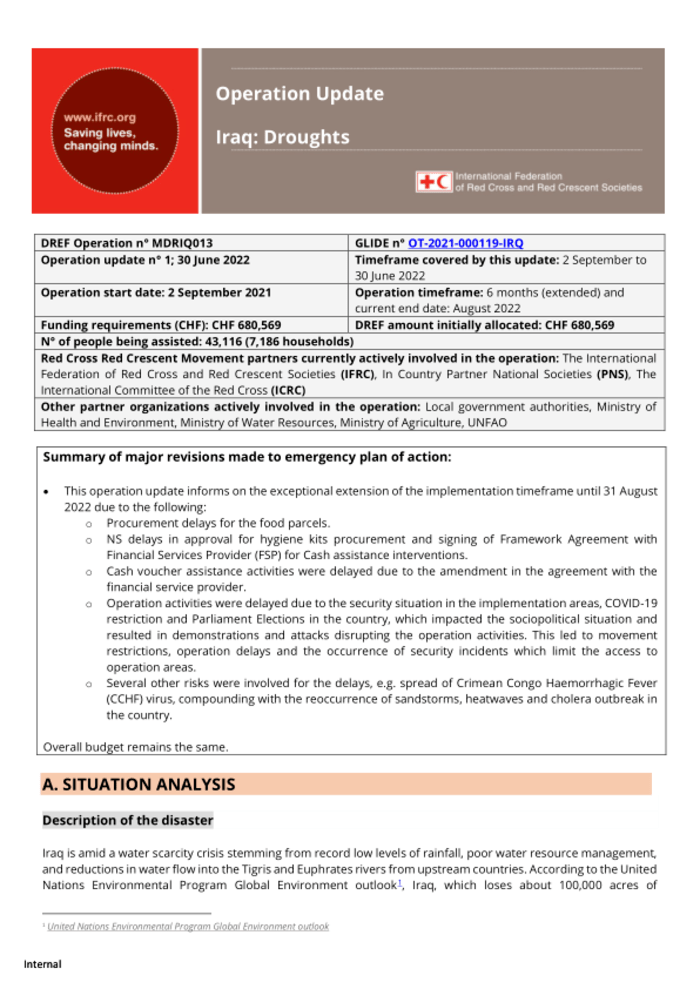 Summary of major revisions to the emergency action plan:

• This operation update informs about the exceptional extension of the implementation deadline until August 31, 2022 due to the following:

o NS delays in approving the purchase of hygiene kits and signing the framework agreement with the financial service provider (FSP) for cash assistance interventions.

o Voucher assistance activities were delayed due to change in agreement with financial service provider.

o The operation’s activities were delayed due to the security situation in the implementation areas, COVID-19 related restrictions and legislative elections in the country, which had an impact on the socio-political situation and resulted in protests and attacks disrupting the operation’s activities. This has led to movement restrictions, operation delays and the occurrence of security incidents that limit access to operation areas.

o Several other risks have been implicated for the delays, for example the spread of the Crimean-Congo Haemorrhagic Fever (CCHF) virus, compounded by the resurgence of sandstorms, heat waves and the cholera outbreak in the country.

The overall budget remains the same

A. ANALYSIS OF THE SITUATION

Description of the disaster

Iraq is in the midst of a water scarcity crisis resulting from record levels of rainfall, mismanagement of water resources and reductions in water flow into the Tigris and Euphrates rivers from upstream countries. . According to the United Nations Environment Programme’s Global Environmental Outlook1, Iraq, which is losing an estimated 100,000 acres of agricultural land per year, has been identified as the fifth most vulnerable country in the world to declining water and food availability, temperature extremes and associated health issues. Furthermore, Iraq has been identified as having the highest population growth rate in Western Asia, which will further aggravate the above conditions. Iraq is one of the 5 countries most affected by climate change and the 39th most water-stressed country. Last year’s record low rainfall, the second driest season in 40 years, has led to water shortages, desertification and soil erosion due to unsustainable farming practices and damaged vegetation cover and shrinking. Conflict has devastated land and water sources in Iraq, causing further soil erosion and contamination, while political uncertainty poses challenges to environmental governance.

Earlier this year, April 2022: A senior adviser to Iraq’s water resources ministry warned that the country’s water reserves had halved since last year, due to a combined effect of prolonged drought, lack of rainfall and falling river levels, as officials continue to warn of a deeply concerning environmental and humanitarian situation in Iraq. Water reserves are much lower than what the country had last year in 2021, by about 50% due to low rainfall and low water flow from neighboring countries. The water levels of the Euphrates and the Tigris have dropped significantly in recent years. In the latest stark warning of the threats a warming climate poses to the country, a report by the Iraqi Ministry of Water Resources late last year predicted that unless urgent action is taken to combat Against the drop in water levels, the two main Iraqi rivers will be completely dry in the coming years. The ministry spokesperson mentioned that the drought is causing long-term public health problems, including drinking water shortages and poor quality drinking water, sanitation and hygiene, food and nutrition, which is of serious concern to local communities.

June 17, 2022, Baghdad: Iraq faces multiple challenges caused and exacerbated by climate change, including prolonged heat waves, reduced rainfall, loss of fertile land, salinization, insufficient investment in infrastructure , cross-border water shortages and a prevalence of dust storms, the UN and NGOs in Iraq are marking the World Day to Combat Desertification and Drought with a call to action to protect the country from devastating effects. Water scarcity, removal of topsoil and declining land productivity have led to reduced food production in Iraq. A survey conducted in 2021 by the Iraqi government, covering 7 governorates, found that 37% of wheat farmers and 30% of barley farmers suffered crop failures. At the same time, incomes have plummeted as farmers do not have crops to sell, which has a direct impact on food security. The drastic decrease in agricultural land and biodiversity in agriculture, land degradation and the increase in sand dunes have all added to the pressure, leading to the migration and death of animals. This is compounded by the dust storms experienced so far in 2022, which have even caused human fatalities. The 4 million people living downstream from Iraq, the governorate of Basra, are the most affected by the water shortage. Iraq’s marshes, with their rich cultural and human heritage and natural resources for livelihoods, once represented the first line of defense against climate change and environmental damage. Declining water levels in the once important Tigris and Euphrates rivers have led to increased salt levels and deteriorating water quality. With an annual evaporation of up to 3 meters and a decline in river water, seawater moved upstream, destroying 60,000 acres of farmland and 30,000 trees. As of March 2022, the displacement of around 3,000 families due to drought and environmental degradation had been recorded in 8 governorates in central and southern Iraq. Recent studies have shown that water scarcity is one of the main drivers of migration from rural to urban areas, alongside challenges to sustainable agriculture and food security.2 Drought conditions in Iraq have been exacerbated by the threat of climate change, which has contributed to low rainfall and rising temperatures across the country. Drought has affected northern Iraq since early 2021, while southern governorates have experienced declining water supply and quality for several years. Crop and livestock production has since plummeted, affecting vulnerable communities that have been affected by conflict and displacement in recent years. At least seven million people in Iraq have been affected by drought in recent times, which has had a huge impact on access to water, food, basic services such as electricity, in addition to farmers’ livelihoods. The areas of intervention that have been identified by the Iraqi Red Crescent Society (IRCS) according to vulnerability criteria are Basra, Nineveh and Diyala. More information is available in the “needs analysis and scenario planning” section.