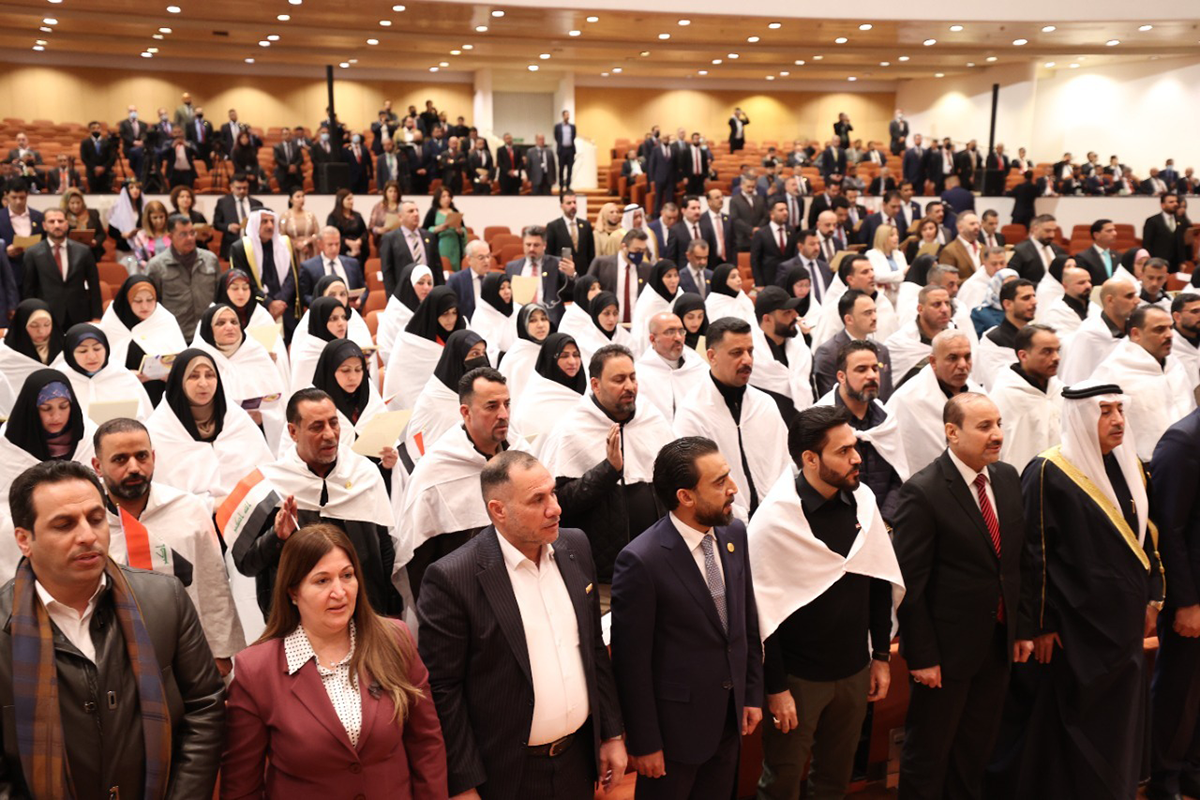 While the Federal Ministries of Finance and Planning are expected to approve, allocate and track these funds as they traditionally do, the initiative and final say on how they should be spent will rest with local provincial governors in coordination with often political authorities. appointed middle managers and their complex network of bureaucratic committees.

Therefore, it can create ample space for corruption, either through evasive contracting processes or even unnecessary inflating of the payroll via dubious projects and programs. Transparency – or lack thereof – was a major concern for observers ahead of the bill’s passage. On the payroll expansion side, the bill inflated it by another billion dollars (6%) by providing jobs for temporary and contract workers and even creating a program for graduates (see table 1). This amount was almost equal to the $1.1 billion allocated for social security, health and education, war reparations and internally displaced persons.

Several reasons explain the broad political consensus in favor of the adoption of the bill. In addition to attempting to circumvent the legal constraints imposed on the caretaker government as mentioned above, the bill provides a lifeline for the political blocs to continue their stalemate for months to come. It was hoped that with Iraqis struggling economically and the government unable to tap the oil money, the politicians would put the country first and reach a long-awaited big deal on government formation.

But the emergency spending bill was created in an effort to dampen a possible public outcry. It guarantees salaries essential to sustaining the daily lives of Iraqis while providing the necessary funds to alleviate – even if only partially – high food prices, thus allowing all parties to continue their stalemate with a minimal popular resistance.

Moreover, neither the SCF nor the ASH would have dared to obstruct the bill and risk their position in the continuing deadlock. The Kurds, despite their ongoing dispute with Baghdad over the constitutionality of their independent oil sector, were smart enough not to stand in the way and become a scapegoat. Even Mr. al-Sadr only acted after the bill was successfully passed; had its deputies resigned while parliament was still drafting the bill, the SCF would have branded the Sadrists as obstructionists.

But the biggest consideration for all parties is how these funds would also help kick-start the activities of the oft-neglected “economic committees” that each party has set up to influence contract decisions and gain financially as a result. After all, leading a political movement in Iraq doesn’t come cheap – it has to feed mouths, buy loyalties, arm militias and support operations. This is especially the case when traditional foreign backers are reeling from sanctions or tired of wasting their money on regional adventurism.

The next six months will be a crucial struggle for the financial survival of the main players, and the looting of contracts requires a well-oiled and staffed government. Finances and, more importantly, job opportunities will also be key to winning over regular Iraqis. Former Prime Minister Nouri al-Maliki’s rebound in the last election could be attributed to maintaining his influence in institutions and maintaining a system of favors that won him some popularity after years of blame. The Sadrists have undertaken a methodical takeover of key government posts over the past three years to counter the decade-and-a-half lead of their rivals. Therefore, it was out of the question for all concerned to even consider resigning – or making a major political move – before the emergency funding bill passed.

In the political vacuum: what happens now?

There are two immediate considerations. First, what will the Independent High Electoral Commission of Iraq do? And second, have the Sadrists decided to abandon the “political process”?

On the first, the fifth section of Article 15 of the Iraqi House of Representatives Election Law (No. 9/2020) clearly states that “if a seat becomes vacant, the candidate with the highest score in the constituency will replace its holder. “This should cause a radical change in the fate of the SCF, especially in the southern provinces where it was closely following the Sadrists.

With their seats potentially strengthened, the SCF could come closer than ever in the past seven months to forming a government. But they still need to bring together at least two-thirds of parliament (220 seats) to achieve this. Even if the SCF takes all the clearly affiliated Shia seats in parliament – ​​including the 73 relinquished by the Sadrists – or 151 in total (see Table 2), they will still be short of 69 seats.

In other words, they can only form a government if they ally themselves with what remains of the ASH – the main Sunni and Kurdish political players. This was undoubtedly part of Mr. al-Sadr’s decision-making.

There are two potential scenarios moving forward. The first is that the SCF is trying to form a government after reaching an agreement with the Kurds and the Sunnis. Independents and other seat holders would likely pass as the country overwhelmingly wants a way out of the current stalemate. In such a case, the Sadrists would be left as an opposition outside parliament. So far, that seems to be the direction the CFS is taking. On June 14, he expressed “his respect for the Sadrist decision” and called on “all Iraqi political parties to join the dialogue to form a strong government”.

The risk here for the SCF and the new government is that Mr. al-Sadr – and his hundreds of thousands of loyalists – bring down such a government within months of its formation. It’s not beyond comprehension. After all, the Sadrists rode the wave of the Tishreen protests in late 2019 that brought down the Adil Abdul-Mahdi cabinet, and a repeat of the “blue hats” experiment – ​​when Mr al-Sadr charged his supporters to protect protesters, only to abandon them later – is entirely doable given Iraq’s continuing socio-economic difficulties. But even here, the SCF may not be as ill-prepared as some of its key constituents were in 2019. After all, the fall of Mr Abdul-Mahdi’s cabinet was a lesson to be learned.

The second scenario is that the SCF waters down Mr. al-Sadr’s plans and instead offers Sadrists positions in the next government. Of course, this would be done as a compromise to unite the Shia House and by extension all political actors in the country, as well as in recognition of Mr. al-Sadr’s influence and the rights of his movement as the largest election winner. .

This is actually a beneficial scenario for the Sadrists as it allows them to deny their responsibility for the country’s political and economic challenges. Being kicked out of the government and undermined by other Shiite parties has always been the beacon of Mr. al-Sadr and his movement to deflect blame. If he had formed a government, such excuses would no longer work. More importantly, this scenario allows the Sadrists to maintain their grip on key government positions.

But even here, Iraqi politics are difficult to predict. Personal and historical disputes could resurface, making it difficult to find a compromise. The politicking is expected to last longer now and in the worst case scenario, if neither side is satisfied, the chances of settling things through arms are still not very far fetched.

Finally, Iraqi politics has once again complicated its economic trajectory. Oil prices are expected to remain at high levels over the next few years. The International Monetary Fund expects them to bring Gulf oil exporters about $1.4 trillion in additional revenue over the next four to five years.

As Iraq’s neighbors prepare to use these large sums to diversify their economies and prepare for the coming decades when oil’s dominance in the global energy mix is ​​increasingly challenged by efforts to achieve net zero emissions, the Iraqi executive is rocked by a power struggle among the country’s politicians.

Even the Petroleum Department’s plans to spend $17 billion – directly and through investment – to boost oil production capacity to 8 million barrels per day by 2028, essentially the lifeline for the economic existence of Iraq, are compromised. In the recently passed Emergency Spending Bill, the department received only $340 million. Without a budget and without a stable government, even the reforms needed to escape oil dependence under Iraq’s ambitious white paper will have to wait. Increasingly, with all the endless political wrangling that has unfolded since 2018, the tenure of an Iraqi cabinet is becoming two years at best rather than four.

Yesar Al-Maleki is an economist and energy consultant with extensive knowledge of the intertwined topics of energy, geopolitics and economics in the region. He is also a non-resident researcher at the Middle East Institute (MEI).

MEI is an independent, non-partisan, non-profit educational organization. It does not engage in advocacy and the opinions of its scholars are their own. MEI welcomes financial donations, but retains exclusive editorial control of its work and its publications reflect only the opinions of the authors. For a list of EMI donors, please click here.