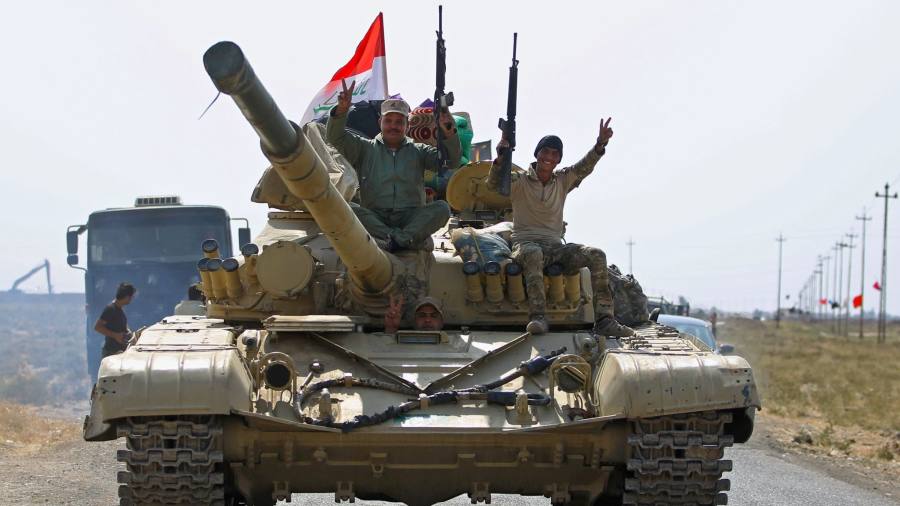 Iraqi forces have recaptured Kurdish-controlled areas near Mosul, even as Washington urged Baghdad to curb its offensive in northern Iraq.

Kurdish Peshmerga troops withdrew without a fight from areas including the Mosul Dam as Iraqi soldiers advanced, the military said in a statement Wednesday. Baghdad’s latest move will fuel fears that the advance could worsen the crisis between two of the US’s main allies in the region – Iraq and the Kurdistan Autonomous Regional Government (KRG).

“Our message is the same for both sides – we urge them to reduce tensions, defuse, coordinate and find areas where they can talk about things to prevent military confrontation,” a senior US official said.

Washington is also concerned about the factional role within the Popular Mobilization Forces (FMP), a Tehran-backed paramilitary force that was part of the push towards Kirkuk, the disputed oil-rich city, this week. Analysts say Iran – the most influential regional power in Iraq – could use the crisis to increase its presence in the country at the expense of the United States.

“We have concerns about the presence of PMF in these areas and would like them to be withdrawn so that more regular Iraqi forces can take over,” the US official said. â€œWe recognize the prerogative of the federal government to re-establish a presence in the sectors it has taken over. But we also have to know that there is a limit that [Iraqi prime minister Haider al-Abadi] put on those moves.

The KRG, which rules Iraqi Kurdistan, has lost control of part of the territory over the past three days, including oil fields and military sites, as Baghdad stepped up pressure on the Kurdish authorities in retaliation for a controversial referendum on independence last month. The KRG had controlled areas claimed by both Baghdad and Kurdistan since 2014, when the Iraqi army melted in the wake of the Isis blitz in northern Iraq.

Washington has spent years and millions of dollars arming and training both the Peshmerga and the Iraqi military to aid in the battle against the jihadist group, which has since lost most of its territory in the country. The concern is that the crisis between the two is hampering efforts to flush out the remaining Isis militants.

“Our effort was to get the prime minister to respond to the referendum, but to do so on a non-violent basis,” the US official said.

The KRG proceeded to the ballot despite strong opposition from Iraq, the United States, Turkey and Iran. He included many disputed territories in the vote, further exacerbating tensions.

The rapid advance of Iraqi forces now means that the KRG has lost many strategic areas that it could have used as bargaining chips in future negotiations between Baghdad and Erbil, capital of the autonomous region of Iraqi Kurdistan.

Mr. Abadi called for dialogue on Tuesday, declaring that the referendum on Kurdish independence was “over”.

â€œThe illegal referendum is over, its results invalid and are a thing of the past. We call for dialogue on the basis of the Iraqi national constitution, â€Abadi said.

But the prime minister also pledged to regain control of areas lost by the Iraqi military three years ago, and his forces have pushed into areas held by Kurds since the 2003 US invasion that overthrew Saddam Hussein, the late Iraqi dictator.

â€œIn this explosive situation, we call on all parties to be cautious and speak directly; military action must be stopped immediately and further escalation avoided, â€a statement from Berlin said, according to Kurdish news channel Rudaw.