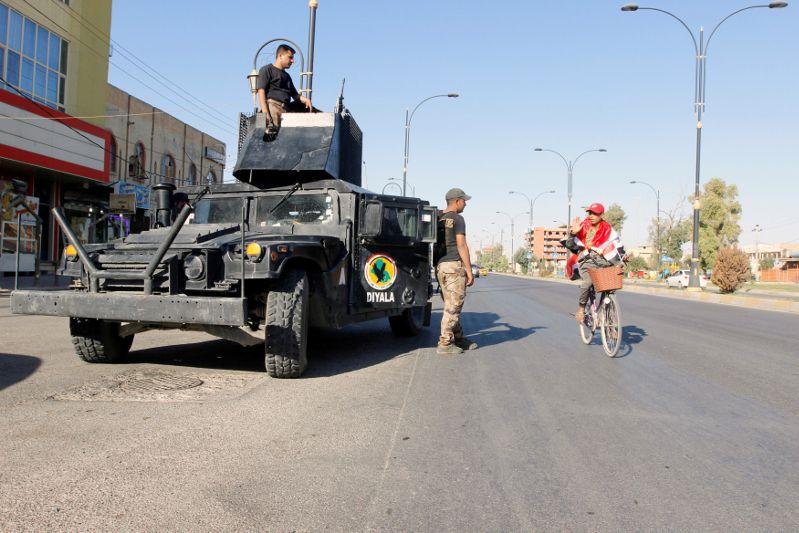 The district of Altun Kupri, or Perde in Kurdish, is located on the road between the city of Kirkuk – which fell to Iraqi forces on Monday – and Erbil, capital of the semi-autonomous region of Kurdistan in northern Iraq who voted in a referendum last month to secede from Iraq against Baghdad‘s will.

A force made up of US-trained Iraqi Counterterrorism Service units, Federal Police and Iranian-backed fighters known as the Popular Mobilization began its advance on Altun Kupri at 7:30 a.m. (04:30 GMT ), said an Iraqi army spokesperson.

Kurdish Peshmerga forces withdrew from the town, located on the Zab River, after fighting the advancing Iraqi troops with machine guns, mortars and rocket-propelled grenades, Iraqi security sources said. Neither side provided information on the victims.

Iraqi central government forces advanced into the largely unopposed Kirkuk province, with most of the Peshmerga forces withdrawing without a fight.

The government’s advance has transformed the balance of power in northern Iraq and risks scuttling the independence aspirations of the Kurds, who voted overwhelmingly on September 25 to secede from Iraq and take with them the Kirkuk oil fields.

The fighting in Altun Kupri marked only the second case of significant violent resistance by the Kurds in Kirkuk province. Dozens of people were killed or injured in the previous clash on Monday, the first night of the government’s advance.

The US State Department has expressed concern over reports of violent clashes around Altun Kupri.

“In order to avoid any misunderstanding or new clashes, we urge the central government to calm the situation by limiting the movements of federal forces in the contested areas to those coordinated with the regional government of Kurdistan,” he said in a statement.

The State Department has made it clear that even if federal authority is reasserted over the “disputed areas” this does not change their status – “they remain contested until their status is resolved in accordance with the Iraqi resolution. In what seemed to be a nod to the Kurds and their assertion that they have a stake in these territories.

Altun Kupri is the last town in Kirkuk province on the road to Erbil, located just outside the border of the Autonomous Region established after the fall of Saddam Hussein in 2003. Iraqi forces seek to restore authority Baghdad in territory occupied by Kurdish forces outside the official boundaries of their autonomous region, most of which had been seized since 2014 during the war against Islamic State militants.

Iraq’s top Shiite cleric, Grand Ayatollah Ali al-Sistani, on Friday called on the state to protect the Kurds in northern Iraq, a rare political intervention from a personality whose words are compelling. law for the majority of Iraq’s Shiite majority.

Sistani’s appeal, launched during Friday prayers in the Shiite holy city of Kerbala by one of his representatives, came amid reports of abuses against Kurds in areas evacuated by Kurdish Peshmerga , notably Kirkuk, Tuz Khormato and Khanaqin.

Kurdish officials said tens of thousands of Kurds fled Kirkuk and Tuz to the two main towns in the Kurdish Autonomous Region, Erbil and Sulaimaniya.

The post-Saddam Iraqi constitution allows the Kurds to govern themselves in three mountainous northern provinces and guarantees them a fixed percentage of Iraq’s total oil revenues, an arrangement that made them prosper while the rest of the country was at war. .

Although Kirkuk is outside the Autonomous Region, many Kurds regard it as the heart of their historic homeland and its oil as their birthright. His loss makes their quest for independence seem distant, for it would leave them only about half of the oil revenues they had sought to claim for themselves.

The Kurdish Peshmerga settled in Kirkuk without a fight in 2014, retaking positions left by the Iraqi army as it fled from Islamic State militants.

Iraqi and Kurdish forces have exchanged accusations of using weapons that Western powers initially provided to them to fight the Islamic State.

â€œToday, the popular mobilization attacked us with American weapons. What is this deal between the Americans and the Iranians? said Harem Shukur, a peshmerga fighter outside of Altun Kupri. “The Americans sold us to Iran,” he added, echoing the widespread bitterness of the Kurds who believe the United States has not honored the bonds of friendship forged decades.

An Iraqi army spokesman accused the Peshmerga of using rockets provided by Germany.

Germany has said it hopes to resume its mission to train Kurdish Peshmerga fighters in northern Iraq on Sunday, provided the conflict does not escalate. Berlin suspended it last week as tensions mounted.

Report by Maher Chmaytelli in Baghdad and Mustafa Mahmoud in Kirkuk; Eric Walsh in Washington; Editing by Andrew Heavens and James Dalgleish