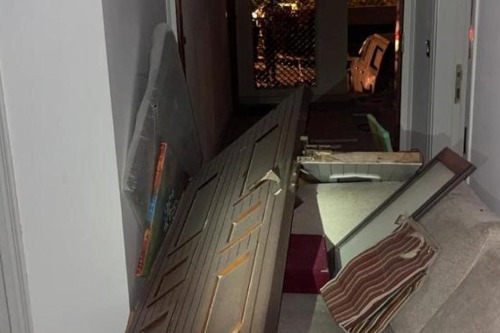 The state-run Iraqi news agency published photos of two unexploded projectiles on the roof of al-Kadhimi’s house, and said the projectiles were part of the failed assassination attempt that targeted al-Kadhimi.

Before dawn, al-Kadhimi escaped unharmed an assassination attempt by a drone bomb that landed on his residence in the heavily fortified Green Zone, which is home to some of the main Iraqi government offices and foreign embassies.

On Friday, protests turned into clashes with security forces at the entrances to the green zone, which resulted in the deaths of two protesters and injured dozens of security personnel and protesters.

In the October 10 legislative elections, the Sadrist movement, led by prominent Shiite cleric Moqtada al-Sadr, took the lead with more than 70 seats, while the al-Fatah (conquest) coalition won 17 seats against 47 in 2018. elections.

Political parties dissatisfied with the results said the elections had been manipulated and that they would not accept the “fabricated results”.

Supporters of political parties rejecting the election results have taken to the streets of many Iraqi cities, including the capital Baghdad, as the Iraqi Independent High Electoral Commission is still examining appeals and complaints filed by political parties.