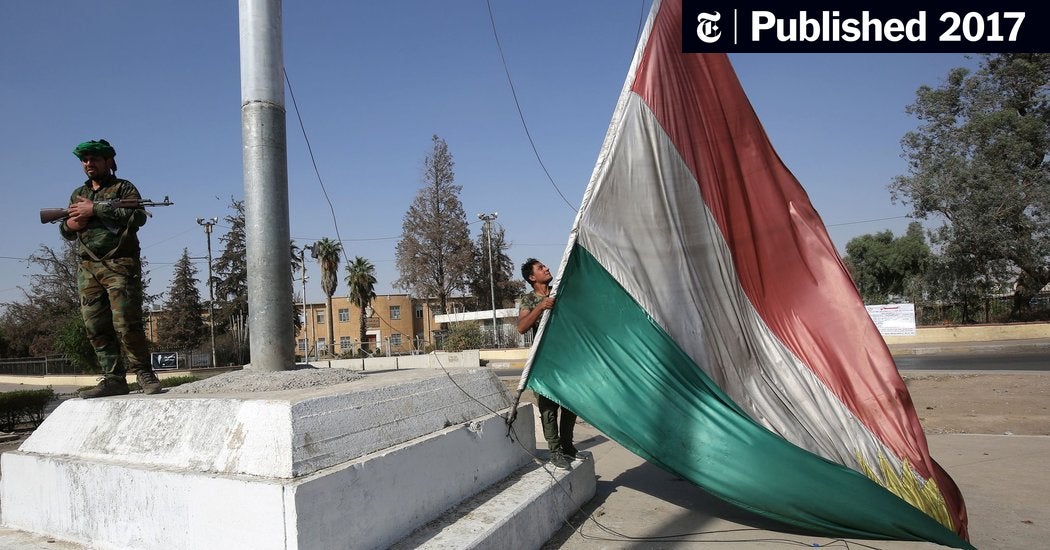 BAGHDAD – Military operations in Iraq last week were one-sided, with Iraqi government forces using superior manpower and firepower to reclaim disputed areas that had been controlled by Iraqi Kurdish separatists since 2014.

But in the PR war, the two US allies compete on a flatter battlefield to gain international support and sympathy just days after Iraq ousted Kurdish fighters from nearly every disputed area.

The Kurds and Baghdad exchanged charges after a battle on Friday in which Iraqi government forces reclaimed the last area held by the Kurds in the oil province of Kirkuk.

Both sides blamed each other for firing the first shots and using weapons provided by the US-led coalition for use against Islamic State militants. Kurdish fighters known as the Pesh Merga eventually withdrew from the town of Altun Kupri and retreated to the Kurdish Autonomous Region, the Iraqi military said.

And the two sides – which, backed by US airstrikes and artillery, drove Islamic State militants out of most of Iraq – also exchanged broader accusations.

Massoud Barzani, president of the Kurdish regional government, accused Baghdad on Friday evening of having imposed “a blockade and collective punishment” on the Kurds. Baghdad’s military command responded on Saturday by saying that the Kurdish leaders had engaged in “exaggerations and lies”.

The United States called on the two sides to coordinate their troop movements in order to avoid further clashes. “We urge the central government to calm the situation by limiting the movement of federal forces in disputed areas to those coordinated with the Kurdistan regional government,” State Department spokesperson Heather Nauert said in a statement.

Last Monday, Baghdad launched a military operation in areas that had been seized by Kurdish forces in 2014 after Iraqi troops fled an Islamic State assault. The move was seen as a retaliation for the Kurds’ vote last month, over objections from Baghdad and the United States, to demand Iraqi independence.

Kurdish forces withdrew without a fight from the city of Kirkuk and other areas after members of a Kurdish faction opposed to Mr. Barzani negotiated a deal with government officials. Analysts said a prominent Iranian military commander, Major General Qassim Suleimani, helped negotiate the deal.

Iraqi Shiite militias, armed by Iran and advised by General Suleimani, played an important role in the government operation.

The United States said it did not take sides in the conflict, but did not oppose or interfere with the Iraqi government operation. US troops were in the area, but played no part in the conflict, the coalition said.

Analysts said Washington is expressing its displeasure that Barzani has rejected US proposals to quash the independence vote and start negotiations with Baghdad. U.S. officials told Barzani after the vote that he had lost the goodwill of the United States, according to a senior official who requested anonymity because he was not authorized to discuss the matter publicly.

Kurdish leaders have criticized the United States, claiming that Washington abandoned the Kurds after the death of some 1,700 pesh merga while fighting the Islamic State. Mr. Barzani’s communications director, Vahal Ali, accused the United States of “giving Iraq to Iran as a gift.”

“The deafening silence of the international community encouraged Iraq and neighboring countries to attack Kurdistan,” the Kurdish regional government said in a statement. The events of the week, he said, “confirmed the legitimate fears of the Kurds regarding our future in this country”.

Mr Barzani urged the Kurds in the United States and Europe to organize peaceful protests in support of Iraqi Kurdistan. On Saturday, the Iraqi foreign ministry said protesters in Erbil attacked and damaged the Iranian consulate.

The State Department called on the two sides to “engage in dialogue” on the contentious areas. “The reaffirmation of federal authority over the disputed areas does not change their status – they remain disputed until their status is resolved in accordance with the Iraqi constitution,” he said.

The Iraqi military command said on Saturday that Pesh Merga fighters in Altun Kupri fired a German-supplied missile that hit a US-supplied Abrams tank, killing two Iraqi soldiers. The command denied Kurdish claims that the Pesh Merga destroyed 10 Humvee and two Abrams tanks. A coalition spokesperson said he could not confirm the information on the battlefield.

Elsewhere, a Kurdish faction leader in Kirkuk, Aras Sheikh Jangi, said Pesh Merga intelligence agents were working alongside federal and local police in the disputed city, which is home to Kurds, Arabs and Turkmens. In a statement on Saturday, Jangi said all Shiite militias left the city two days ago.

The Shiite militias dominate the so-called popular mobilization forces incorporated in the Iraqi army. They have been accused of being behind attacks against Kurdish civilians in disputed areas.

The United Nations said on Thursday it received reports that 150 Kurdish homes in the town of Tuz Khurmatu had been set on fire by armed groups. After the withdrawal of the Pesh Merga fighters last Monday, the city came under the control of Shiite Turkmen fighters who are part of the popular mobilization forces.

In total, according to the United Nations, 100,000 civilians have fled the disputed areas, including tens of thousands who left the city of Kirkuk after the operation on Monday, some of whom returned. Most of those who fled are believed to be Kurdish supporters of Mr. Barzani.

In Baghdad and Erbil, the capital of the Kurdish region, comments from local residents reflected the enmity between the two sides.

â€œWell done Abadi,â€ said Firas Abbas, 42, a businessman in Baghdad, referring to Prime Minister Haider al-Abadi. â€œLaw and order must be enforced in all provinces. “

In Erbil, Ahmed Sharif, 53, a retiree, criticized the United States for being “an international plot” against the Kurds, who he said were the United States’ best friend in the region. “The sole beneficiary of this conspiracy is Iran,” he said.