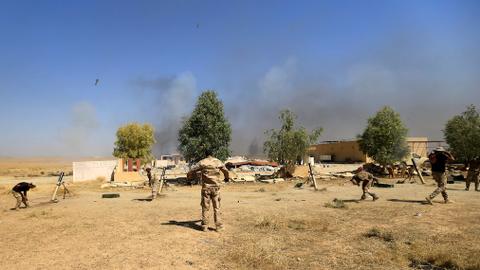 Daesh militants driven from the nearby town of Tal Afar have regrouped in the northern town of Ayadiya, which Iraqi forces are now attacking. The Iraqi Prime Minister has declared Ayadiya and Tal Afar liberated from the insurgency.

Iraqi Prime Minister Haider al Abadi said his US-backed forces had recaptured the northern province of Nineveh from Daesh, including the town of Tal Afar.

But pockets of resistance remain in the nearby town of Ayadiya, where militants fled after being driven out of Tal Afar.

But pockets of resistance remain and Iraqi forces are fighting in closed quarters to drive the remaining militants out of the city.

“We have to make sure that there are no terrorists left hiding in the houses of the city,” said Army Lt. Col. Salah Kareem.

Iraqi forces will step up operations on Friday to clear out militants still holed up in scattered homes, army officers said.

Much of the less than a thousand Daesh now thought to be in Ayadiya came from Tal Afar, where up to 2,000 battle-hardened militants reportedly defended the city against some 50,000 government troops last week.

“Iraq is liberating Iraqis,” he said from Baghdad.

Townsend added, however, that a quick victory in Tal Afar did not necessarily mean that the fight to retake the remaining territory from Daesh would be easy.

“While I would like to say we would see that elsewhere in Iraq and Syria, we don’t really anticipate that,” Townsend said.

“We promise you, our people, that we will continue to liberate every square inch of Iraq,” Abadi said in the statement.

In recent months, tens of thousands of people have fled Tal Afar, which had a population of around 200,000 before the war. The United Nations estimates that 20,000 people fled the city and surrounding areas between August 14 and 22.

Civilians who fled Tal Afar in recent weeks said they suffered months of starvation and brutal treatment at the hands of Daesh, which threatened them with death if they tried to flee.

The army then targets Hawija

Daesh’s recent defeat in Mosul, the provincial capital of Nineveh, marked the latest in a series of territorial losses for the group.

However, the militants still control areas on both sides of the Syrian-Iraqi border.

This includes Hawija, a town between Mosul and Baghdad that Iraqi officials say will be the coalition’s next target.

The Iraqi army dropped millions of leaflets on Hawija on Thursday, warning residents that it was planning an offensive to retake the city from Daesh, the army said in a statement.

The leaflets urged residents to stay away from the militants’ headquarters, lay down their arms and surrender to avoid being killed.