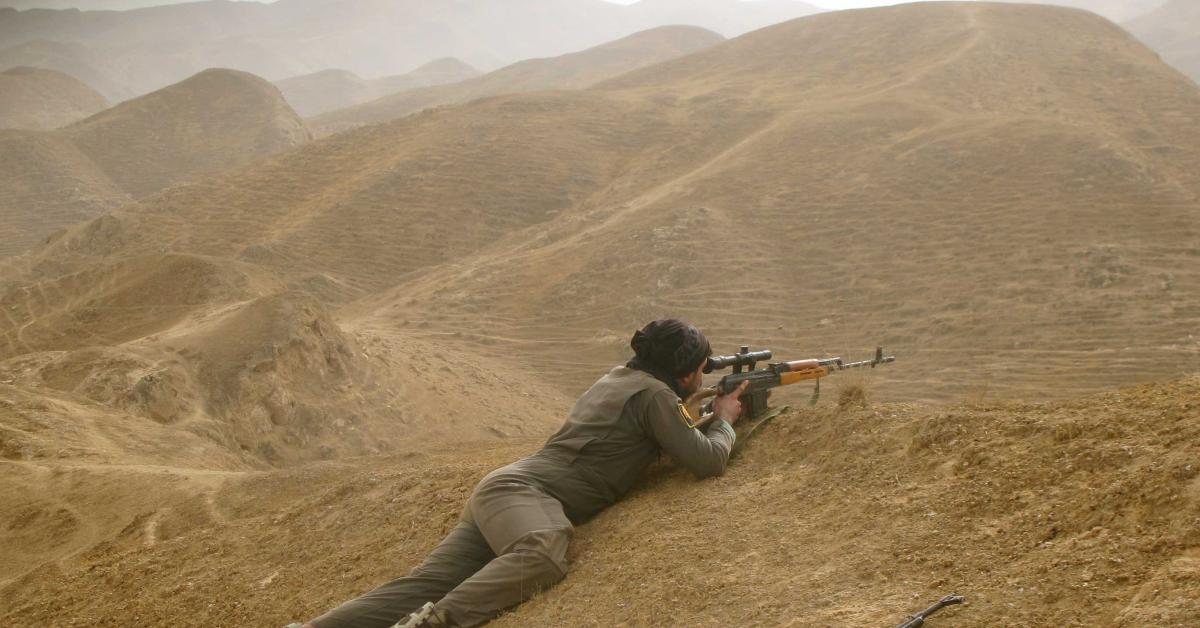 HAMRIN MOUNTAINS, Iraq – Two weeks after Prime Minister Haider al-Abadi declared victory over the Islamic State (IS), joint Iraqi forces have launched an operation to clear the remains of hideouts in the mountainous terrain of the northern province of Salahuddin.

On December 25, the third day of the operation, Al-Monitor accompanied local police, a regional SWAT team and fighters from mainly local Popular Mobilization Units (PMUs) into the mountains to root out IS members hiding in tunnels and caves.

Frontline officers told Al-Monitor that at least 50 armed IS fighters were estimated to be in the area.

Three IS militants were killed the day Al-Monitor accompanied the forces, according to an officer at the front, while two local police were injured.

Several SPG-9 rifles and other weapons were found in hastily dug holes when Iraqi forces exploring the steep sides of the mountainous terrain spotted the soft ground used to cover the weapons.

After leaving the nearby town of al-Alam before dawn, the local police unit stopped along the road to pray and eat some dates for energy before sunrise. They then headed into the mountains along a road skirting the Albu Ajil and Alas oil fields.

The flames of the oil wells, first fire in March 2015 by IS in an attempt to ward off air attacks, brightened the landscape.

A regional SWAT team met with local police with whom Al-Monitor was traveling. Team members said ‘resistance’ was found along the road and drew their weapons from the vehicle’s half-open windows. After crossing the mountain range, we were on a higher plain in the adjacent province of Kirkuk; this is where Hawija and surrounding farming villages were liberated from IS in early October.

While a black ISIS flag still flew high above the collar, it had the words “Ya Hussein” written on it, an invocation to the Prophet Muhammad’s grandson, Hussein ibn Ali, who is revered by the Shia Muslims.

Salahuddin is a predominantly Sunni province, but local Shia PMUs helped liberate it from IS.

Leaving the vehicles in the foothills of the low mountain range, with a few men stationed beside the mortar positions, the forces deployed on foot. Several hours later, after two local policemen were injured by gunfire from IS fighters who were believed to be hiding in a tunnel, forces scouted an area above which helicopters had been seen in action. turning. Arriving near the impact area, two vehicles were found: one with a Salahuddin license plate and another without a license plate and with rusty ammunition piled in the back.

ISIS often booby-traps vehicles, but Al-Monitor was told the vehicles were likely abandoned in a hurry due to overflying planes and the inability to advance further by vehicle.

As the vehicles were being searched, a man inexplicably opened fire on them. Screams followed and Al-Monitor and others left the immediate area due to the potential danger of the ammunition exploding. Once far enough away to be relatively safe, the fighters started shouting why the man could have done this. He then walked away in the opposite direction.

Brig. General Mohammed Al-Hamash, commander of the local al-Alam police, told Al-Monitor that the man was from the ‘southern PMU’ and was just an ambulance driver . Al-Monitor was informed that the incident would be reported to the Liwa Karbala PMU.

A source close to the local armed forces also told Al-Monitor that a former imam who took up arms in the fight against ISIS and now leads a local PMU unit was injured the day before by individuals from the ” PMU sud” during an argument. Al-Monitor could not independently verify this information.

Rumors of various alleged abuses by non-local PMUs abound, but the region has a long history of collaborating with them so essential, and many local men fight in the ranks of non-locals, such as the Badr organization.

The area is also close to a political fault line between the central government and the territories of the Kurdish Regional Government (KRG).

The Hamrin mountain range, which stretches from the Iranian border in Diyala province north to Salahuddin and south to Kirkuk, has long been claimed by Kurdish ideologues and leaders as the ideal frontier for any future Kurdish state.

The takeover of oil-rich Kirkuk by the central government mid-october after the September 25 independence referendum called by then KRG President Massoud Barzani, however, made any Kurdish state unlikely in the near future.

The wadis, small caves and other physical features of the Hamrin Mountains make it an ideal hiding place. This is where civilians fled from Hawija when the town was under IS control for three years. Many civilians died because of the many IEDs planted on the roads or the difficulties encountered along the way.

Until Hawija recaptured from IS control in early October, the town of al-Alam, across the Hamrin Mountains, was filled with displaced people from Hawija and surrounding villages.

On several visits to al-Alam over the course of about a year, Al-Monitor encountered people who had made the dangerous night journey through the mountains and heard stories of corpses seen along the way.

When Al-Monitor visited the town again in late December, most of the displaced people reportedly returned to Hawija and surrounding areas. Attacks keep happening in the area, however. Officers involved in the operation told Al-Monitor that clearing the Hamrin Mountains should significantly reduce the possibilities for the insurgents to carry out such attacks.