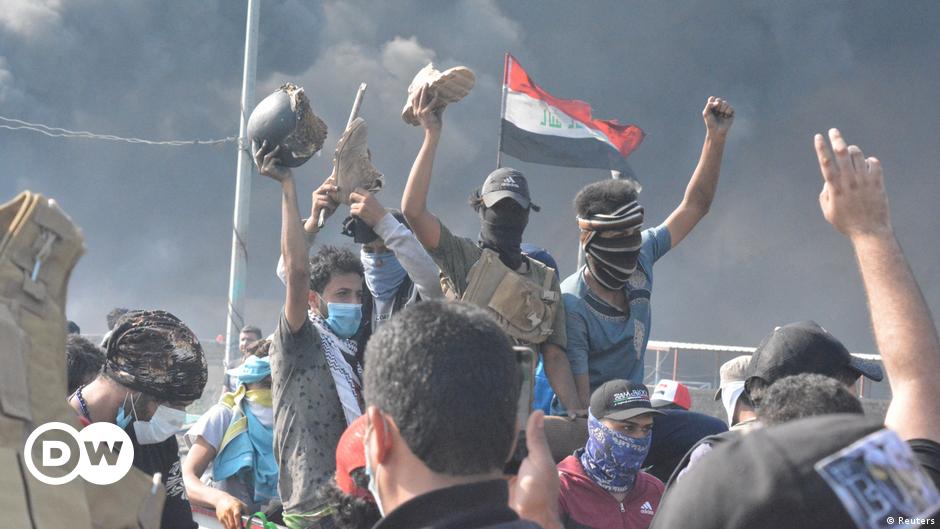 Iraqi security forces shot dead 40 protesters and injured scores of others in widespread clashes across the country on Thursday, in the latest bloody crackdown on nearly two months of anti-government protests.

It came just days after protesters set fire to two government buildings and the home of a city lawmaker.

In the capital, Baghdad, security forces shot dead four protesters and injured 22 others when protesters attempted to cross the important Ahrar Bridge.

Ten more people were killed in the Shiite sanctuary town of Najaf – protesters torched the Iranian consulate on Wednesday in anger over Tehran’s political and military interference with its neighbor.

Protesters were killed and injured when security forces opened fire to prevent them from entering the building.

The funeral processions provided another opportunity to protest with mourners defying the curfew announced the day before.

“We stay until the regime falls and our demands are met!” sang the mourners.

Prime Minister Adel Abdel Mahdi has ordered military leaders to deploy forces in the predominantly Shiite southern provinces with the most protests, according to the military.

The Iraqi army also said Thursday that joint military-civilian “crisis cells” had been created to “impose security and restore order.”

He said military commanders have been appointed to lead and control security and assist governors. By Thursday afternoon, a commander, Jamil Shummary, had already been sacked.

The Iraqi Human Rights Commission accused the security forces of using “excessive force” in the crackdown.

“This bloodshed must now stop,” she added.

However, Iranian Foreign Ministry spokesman Abbas Mousavi demanded that Iraq take decisive action against the protesters. He said Iran had “officially expressed its disgust to the Iraqi ambassador in Tehran” over the attack on the consulate, in a statement to the official Iranian news agency IRNA.

Baghdad and southern Iraq have been plagued by the biggest popular protests against the entire political class and widespread corruption since the US-led invasion that toppled Saddam Hussein in 2003.

More than 390 people have been killed and thousands injured in protests that crossed the country’s sectarian borders.

The protests are the greatest threat to the Shiite-dominated ruling class of the post-Saddam era. The protesters are mostly young unemployed and disenfranchised Shiites who are seeking the departure of those who claim to represent them.

Every evening at 6.30 p.m. UTC, DW’s editors send out a selection of the day’s quality news and reporting. You can sign up to receive it directly here.