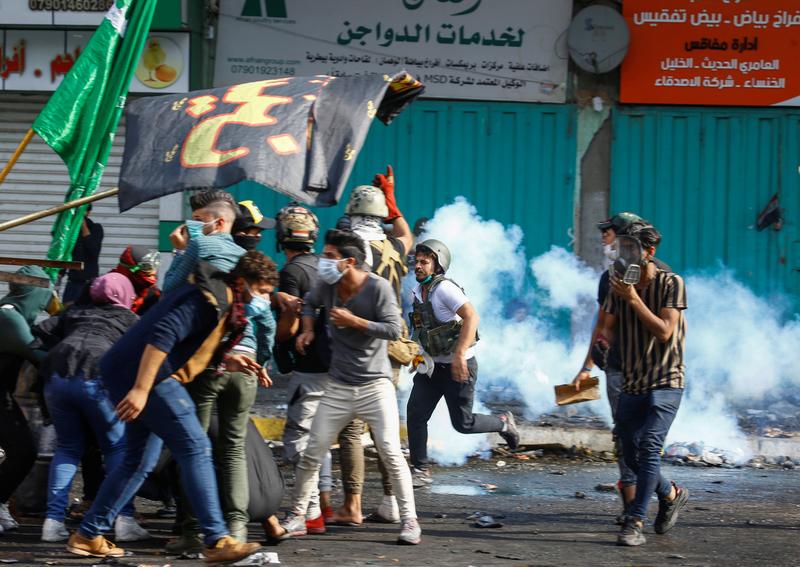 BAGHDAD (Reuters) – Iraqi security forces killed at least four anti-government protesters on Thursday as they tried to push them back to their main camp in central Baghdad, police and medics said, but protests resumed in same place later in the day.

The violence shattered two days of relative calm in Baghdad after weeks of bloody unrest that killed more than 300 Iraqis as politicians grapple with the biggest challenge in years for their grip on power.

The mass protests, which began in Baghdad on October 1 and have spread to southern Iraq, are an eruption of public anger against a ruling elite seen as enriching themselves with the state and serving foreign powers, especially Iran, as many Iraqis languish in poverty without jobs, health or education.

The deadly use of live ammunition, tear gas and stun grenades against mostly unarmed protesters fueled the unrest. The government has promised limited reform that falls short of protesters’ demands for the withdrawal of an entire political class.

Security forces have attempted in recent days to move towards and isolate Tahrir Square from Baghdad, the main protest camp. They shot at protesters in a nearby early morning assault on Thursday, a Reuters cameraman said.

According to police and medical sources, the clashes left four people dead, three of whom were hit in the head by tear gas canisters. The fourth died of injuries caused by the explosion of a stun grenade. 65 others were injured, many from live ammunition.

Protesters held their own and gathered in the same area later Thursday as security forces fired tear gas at a concrete wall erected to barricade the protests, a Reuters reporter said.

Dozens of people were suffocated by gas and were evacuated by ambulances and tuk tuks, or treated in makeshift medical centers in Tahrir Square.

In another main street, the demonstrators used old cupboards, empty gasoline cans and steel sheets to erect their own barricade near the Jumhuriya (Republic) bridge.

“We are stepping up in case the security forces make another push later,” said Abbas, a teenager helping erect the makeshift barrier.

Security forces tried to tighten the noose around the Tahrir Square protests. They took control of many surrounding streets earlier in the week.

Security officials said the forces were planning to cordon off the square and carry out a campaign of arrests to stop the momentum of the protests.

The clashes on Thursday morning seem to have emboldened some, however. â€œWe’re not going anywhere,â€ said Hayder Ghareeb, a medical volunteer. “What are they going to do, kill everyone in the square?”

On Thursday evening in Tahrir Square, elated protesters watched their soccer team beat Iran 2-1 in a match live on a giant screen, apparently inspired by the performance. “Iran, Iran, we are walking on you!” they chanted, setting off fireworks to celebrate.

â€œThis game is more important than it usually would be – we are protesting an Iranian-backed government and militias, and our team is beating Iran. This is an important result, psychologically, â€said one protester, who only gave his name under the name of Hussein.

The Iraqi government, headed by Prime Minister Adel Abdul Mahdi, is seen by many to be under the sway of neighboring Iran, whose allies have dominated Iraqi state institutions since the overthrow of Saddam Hussein by the United States. United in 2003.

The American invasion, a ensuing Sunni-Shiite Muslim civil war and the brutal Islamic State (IS) regime over large swathes of Iraq from 2014 to 2017 destroyed infrastructure and killed tens of thousands of people. people.

Despite Iraq’s oil wealth and two years of rare calm after the defeat of ISIS, the government has failed to undo the war damage and root out endemic corruption.

Protesters blame officials and a sectarian governance system for the miserable conditions endured by many Iraqis.

They want a new political system and the suppression of the entire ruling class. Instead, authorities offered electoral reform, jobs for graduates, handouts and housing for the poor and launched a snap election.

Late Wednesday, protesters torched the homes of local officials in the town of Gharraf, 25 km (15 miles) north of the southern city of Nasiriya, security sources said.

Reporting by John Davison and the Baghdad Newsroom; Editing by Mark Heinrich