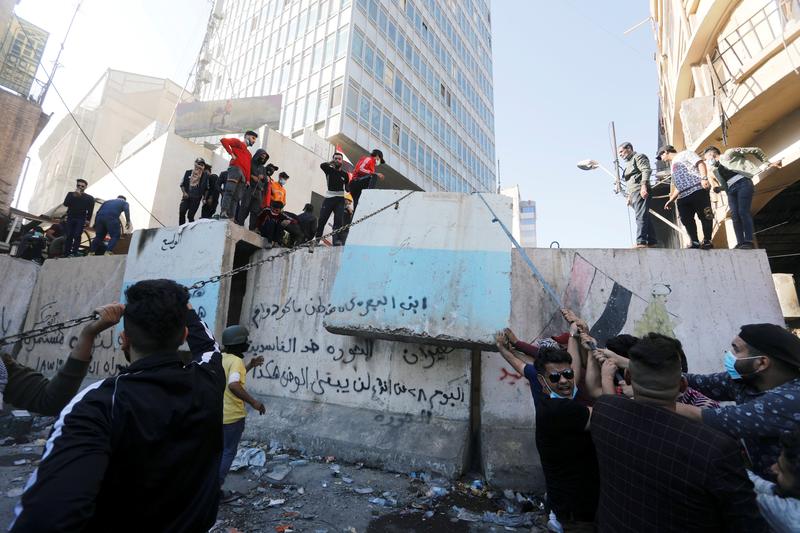 Security forces opened fire and fired tear gas at protesters at a bridge in central Baghdad, police sources said. Two people died from gunshot wounds and two from tear gas canisters thrown directly at their heads. At least 61 others were injured.

The prime minister’s military spokesperson denied that protesters were killed on Friday.

In the south, security forces reopened the entrance to Iraq’s main port, Umm Qasr, which protesters had blocked since Monday, port sources said. Normal operations had not yet resumed.

At least 330 people have been killed since mass unrest began in Baghdad and southern Iraq in early October, the biggest protests since the fall of Saddam Hussein in 2003.

Protesters demand the overthrow of a political class seen as corrupt and in the service of foreign powers while many Iraqis languish in poverty without jobs, healthcare or education.

Iraq’s top Shiite Muslim cleric, Grand Ayatollah Ali al-Sistani, on Friday called on politicians to hurry to reform election laws because these changes would be the only way to resolve weeks of deadly unrest.

“We affirm the importance of accelerating the adoption of the electoral law and the law on the electoral commission because it represents the country emerging from the great crisis,” its representative said during a sermon in the holy city from Kerbala.

The reforms proposed by President Barham Salih would have lawmakers elected from individual districts instead of entire provinces, and would run as individuals rather than on party lists, to meet protesters’ demands to reduce party power. and to have greater local representation. But a bill proposed this week by Prime Minister Adel Abdul Mahdi omitted those changes.

The United Nations Assistance Mission in Iraq (UNAMI) said on Wednesday that plans under discussion in parliament need to be improved to meet public demands.

“I would like to urge parliamentarians to follow up on the legitimate demands of their constituents for credible, free and fair elections,” said the head of the UN mission, Jeanine Hennis-Plasschaert.

Sistani, who only intervenes in politics in times of crisis, exerts a large influence on public opinion in Shiite-majority Iraq. He met Hennis-Plasschaert last week and endorsed the reform recommendations presented by the UN.

On Friday, he said it was important for politicians to reform election laws “in the manner described in last week’s sermon” and reiterated his view that the protesters had legitimate demands that should not be satisfied by violence.

Dissatisfied with government reform promises they see as meager, many protesters have turned to civil disobedience tactics in recent weeks.

They had previously blocked Umm Qasr from October 29 to November 29. 9, except for a brief resumption of operations for three days. It receives imports of grains, vegetable oils and sugar shipments that supply a country largely dependent on imported food.

The initial lockdown cost Iraq more than $ 6 billion in the first week of the shutdown alone, a government spokesperson said at the time.

Protesters in Baghdad also disrupt traffic and still hold the ground, controlling parts of three large bridges that lead to the capital’s walled green zone, where government buildings and foreign embassies are located.

On Friday, they clashed with security forces who opened fire and threw tear gas canisters at a concrete barricade separating them on the Ahrar Bridge. Tuk-tuks transported dozens of injured young men to nearby tents housing medics.

Protesters threw stones and threw makeshift fireworks behind the barricade, and some with oversized gloves sometimes picked up hot tear gas canisters to fire back.

Similar scenes have unfolded in the capital and many southern provinces since protests erupted in the first week of October and then resumed on October 25.

In the streets, many are also going on strike, with several unions led by teachers in particular. Schools and government offices were closed Monday in several southern provinces.

The unrest shattered the relative calm that followed the defeat of Islamic State in 2017.