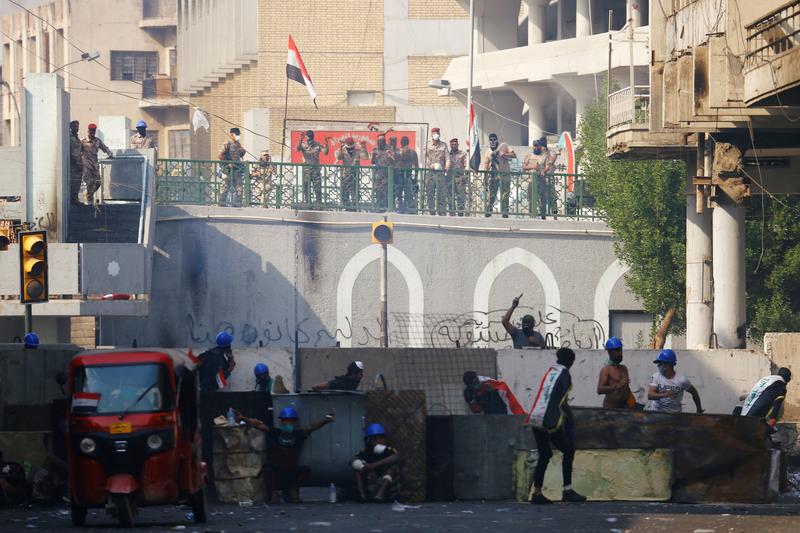 BAGHDAD (Reuters) – Iraqi forces on Sunday shot dead three anti-government protesters in the southern city of Nasiriya, police and medics said, adding to dozens of deaths during weeks of unrest rocking the country weary of the relative stability war he had. since the defeat of the Islamic State.

Protesters gathered on a city bridge and security forces fired live ammunition to disperse them, the sources said. More than 100 other people were injured in clashes in Nassiriya, they said.

Security forces also fired tear gas at protesters in Baghdad, injuring more than 20 people, a day after pushing back protests to a main square in the Iraqi capital. One person died in hospital from injuries sustained the day before in the same area, police and medics said.

The violence shattered a day of relative calm. Unrest erupted in Baghdad on October 1 with protests against the lack of jobs and services that spilled over into the capital and much of southern Iraq.

Security forces used live ammunition, tear gas and stun grenades against mostly young and unarmed protesters, killing more than 280 people, according to a Reuters tally based on medical and police sources.

Prime Minister Adel Abdul Mahdi’s government has taken steps to try to quell the unrest, including aid for the poor and job opportunities for college graduates, but has failed to meet growing demands from protesters calling now to an overhaul of the Iraqi sectarian political system. and the departure of all its ruling elite.

Some of the injured choked on tear gas and were taken to hospital, medical sources said.

Police said on Sunday evening that a car exploded in an area under the control of security forces, setting fire to several other vehicles parked nearby, without causing any casualties. Protesters fear that the saboteurs will try to use the unrest to carry out attacks, which could lead to more severe repression by the security forces, and the government has warned against the use of violence against them. government property or personnel.

THE REFORMS ACCELERATE THE PACE

Iraqi leaders agreed at a meeting in Baghdad on Sunday that the impending electoral reform should give young people a greater chance to participate in politics and break the monopoly of power of the political parties that have dominated state institutions since 2003, state media reported.

The unrest is one of the biggest and most complicated challenges for the current ruling elite since taking power after the American invasion and overthrow of dictator Saddam Hussein in 2003.

Iraq has suffered decades of war, sanctions and more recently sectarian violence. The last major Sunni-Shiite civil war took place during the rule of the extremist Sunni Islamic State over much of northern and western Iraq. The country had experienced rare calm after the defeat of the jihadist group in 2017.

The current protests are free from sectarian rhetoric: led by mostly Shia protesters against a government dominated by Shia politicians and powerful allies of Iran.

Many Iraqis want serious political change, but also fear the consequences of prolonged instability as armed groups vie for power and the armed forces, with Western help, continue to fight ISIS militants in the north of the country.