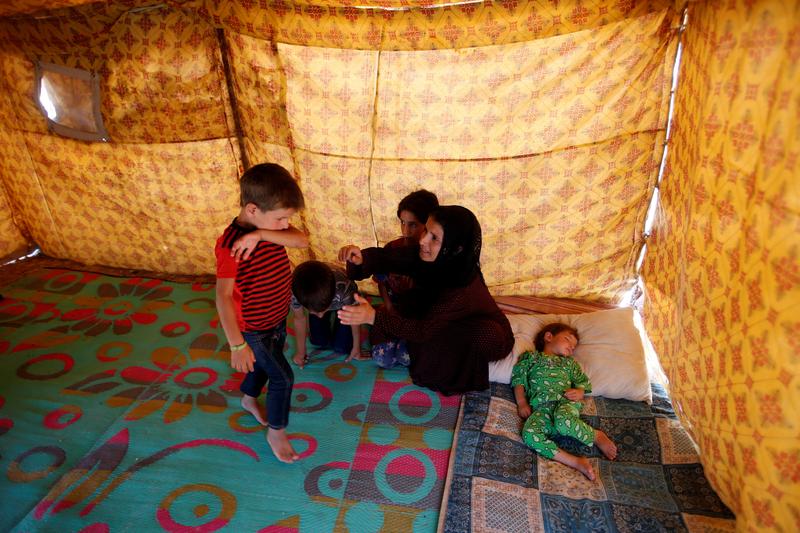 BAGHDAD/ERBIL, Iraq (Reuters) – Five weeks after claiming victory in Mosul, Iraqi forces have taken up positions around the town of Tal Afar, their next objective in the U.S.-backed campaign to defeat militants in the Islamic State, according to Iraqi military commanders.

A longtime stronghold of hardline Sunni insurgents, Tal Afar, 80km west of Mosul, was cut off from the rest of Islamic State-held territory in June.

The city is surrounded by Iraqi government troops and Shia volunteers to the south, and by Kurdish peshmerga fighters to the north.

About 2,000 seasoned militants remain in the city, according to US and Iraqi military commanders. They are expected to put up a fierce fight, although intelligence from inside the city indicates that they are exhausted from months of fighting, aerial bombardment and lack of supplies.

The self-proclaimed Islamic State caliphate all but crumbled last month when US-backed Iraqi forces retook Mosul after a brutal nine-month campaign. But parts of Iraq and Syria remain under its control, including Tal Afar, a city that had a population of around 200,000 before the war.

Waves of civilians have fled the city and surrounding villages under cover of darkness for weeks, though several thousand are believed to remain, threatened with death by militants who have held firm there since 2014.

Shiite Popular Mobilization Forces (PMF) units, some of which are trained and armed by Iran, are also likely to take part in the battle, as well as Tal Afar volunteers fighting alongside government troops, they said. .

The PMF’s involvement is likely to worry Turkey, which claims an affinity with the region’s majority Turkmen population.

Tal Afar saw cycles of Sunni-Shia sectarian violence after the US invaded Iraq in 2003, and produced some of the Islamic State’s most senior commanders.

Coalition targets on Friday included weapons depots and command centers, in preparation for the ground assault.

The war plan calls for Iraqi forces to gradually approach the city from three sides – east, west and south – under cover of airstrikes and artillery.

Major General Najm al-Jabouri told Reuters last month he expected an easy fight in Tal Afar. He estimated that fewer than 2,000 activists and their families remained and that they were “demoralized and exhausted”.

“I don’t expect it to be a fierce battle even though the enemy is surrounded,” al-Jabouri said.

But Colonel Ryan Dillon, spokesman for the US-led coalition, said he “fully expects this to be a tough fight”.

“The intelligence collected clearly shows that the remaining fighters are mainly foreign and Arab nationals with their families, which means that they will fight until the last breath,” said Colonel Kareem al-Lami of the 9th division of the army. Iraqi army.

But Lami said the open terrain and wide streets of Tal Afar will allow tanks and armored vehicles to pass easily. Only one part of Tal Afar, Sarai, is comparable to the old city of Mosul, where Iraqi troops were forced to advance on foot through narrow streets, moving from house to house in a battle that resulted in near destruction. entire historic district.

Lt. Col. Salah Abdul Abbas of the 16th Infantry Division, said they were preparing for street guerrilla combat, based on lessons learned west of Mosul.

The United Nations’ International Organization for Migration (IOM) estimates that there are around 10,000 to 40,000 people left in Tal Afar and surrounding villages. Iraqi commanders say the number of people left inside the city itself, including militants and their families, is closer to 5,000.

However, aid groups say they do not expect a huge civilian exodus as most of the town’s former residents have already left.

On Sunday, 2,760 people fleeing Tal Afar and its surroundings were taken care of by IOM before being transported to camps for the displaced.

“We were living in horror and thinking about death every moment,” said Haj Mahmoud, the retired teacher. He decided to flee with his wife and four sons and has since lived with them in Hammam al-Alil camp.

Residents said they fled in the middle of the night to avoid the militants, who fired on anyone who tried to escape.

“We escaped at night, during evening prayers,” says Khalaf, 20. “All the IS fighters were praying at the mosque, so they didn’t catch us. If they had, they would have sprayed us with bullets in the head”, as they did for his neighbours.

Khalaf said he fled five weeks ago with his two children and 40 other people from his village of Kisik. They walked for a whole day to safety at a peshmerga checkpoint.

“Kisik residents are completely trapped,” he said. “Those who remain tell us there is no water, no food, no bread, no medicine – nothing.” Until he left, a 1kg bag of rice cost around $40.

Sultan Abdullah and his family escaped from Kisik with Khalaf. They are now all living in al-Salamiya refugee camp.

“We had gone three months without food,” Abdallah said. He still has a brother, a cousin and an uncle who remained in Kisik, but he has not been able to speak to them since his departure.

“You were forced to work for the militants to feed your family,” Abdallah said.

“I heard what happened in the old city of Mosul, where entire families were killed by airstrikes,” al-Bayati said. “I didn’t want to see my family buried under the rubble.