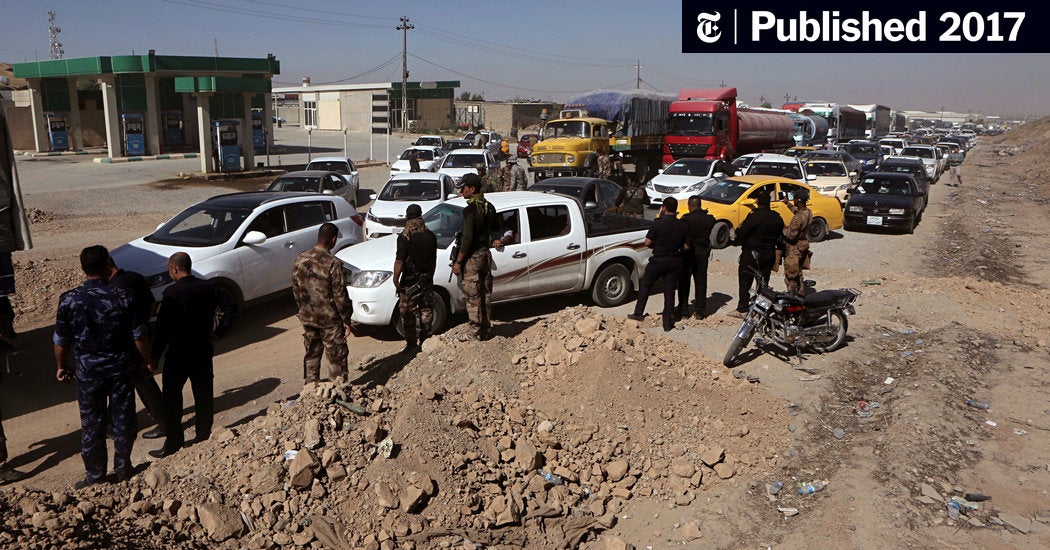 BAGHDAD — Kurdish separatists in northern Iraq ceded all disputed oil fields to the Iraqi military on Tuesday, retreating in the face of overwhelming force that appeared to put an end, at least for now, to their hopes of independence following a referendum organized less than a month ago.

In a swift and largely non-violent operation that took place a day after Iraqi forces recaptured the disputed city of Kirkuk from Kurdish separatists, Baghdad troops occupied all the oil production facilities the separatists held for three years and which had become essential for the Kurds. the economic vitality of the autonomous region.

The loss of these resources will wipe out billions of dollars in export earnings that have flowed to the Kurdish region through the sale of oil. The Kurds took control of disputed areas adjacent to their region after Iraqi troops fled an assault by the extremist organization Islamic State in 2014.

These areas were included in the September 25 referendum in which the Kurdish region voted overwhelmingly for independence. The vote angered not only the central government in Baghdad and the United States, but also neighboring Turkey and Iran, which have large Kurdish populations.

The Iraqi military operation to retake disputed areas was facilitated by an agreement with a Kurdish faction to withdraw peacefully.

The territorial surrender and its economic importance have raised new doubts about the political future of Kurdish President Massoud Barzani, the driving force behind the referendum, clearly foiled by Iraqi Prime Minister Haider al-Abadi.

At a press conference in Baghdad on Tuesday, Abadi said the referendum “is over and is now a thing of the past”.

Mr. Barzani and other referendum supporters “took a very bad situation and made it worse,” said Denise Natali, a Middle East scholar at the National Defense University in Washington.

“Barzani miscalculated,” she said. “He played it all wrong.”

In his first public statement since Iraqi forces launched the takeover operation early on Monday, Barzani accused members of the rival Kurdish faction of withdrawing from disputed areas and said it had “unilaterally paved the way for the attack.

Mr. Barzani appeared to warn Baghdad not to advance beyond these areas. “All resources will be allocated to the security and stability of the Kurdistan region,” the statement said.

Nonetheless, it was unclear what backing Mr. Barzani had to back up his bluster. He is isolated in the Kurdish region, where Baghdad has cut international flights. Iran and Turkey have taken steps to remove Kurdish control of border crossings.

Overwhelmed by the weapons and manpower of the Iraqi army, the Kurdish fighters seemed to be retreating on Tuesday. A senior commander of Kurdish forces defending the oilfields outside the town of Dibis, about 30 miles northwest of Kirkuk, said in a telephone interview that his troops withdrew late Monday evening when Iraqi troops were closing in.

The commander, who asked not to be identified as he was not authorized to speak to reporters, said the Kurdish forces, known as the pesh merga, were ordered out of Dibis by their superiors in Erbil, the capital of the autonomous region.

Kurdish fighters and Iraqi government troops are both part of the US-led coalition fighting Islamic State militants in Iraq.

The Americans did not interfere with the Iraqi army’s takeover of Kurdish-held areas. The coalition and the US Embassy in Baghdad urged both sides to avoid violence and focus on countering the militants.

The United States has always told Mr Barzani that it opposes the referendum, saying it would foment ethnic conflict, destabilize Iraq and undermine the fight against Islamic State. Baghdad moved to isolate the landlocked Kurdish region after the referendum, with help from Iran and Turkey, then launched an assault on the oil-rich province of Kirkuk early on Monday.

US troops were in the province but played no role in the Iraqi military operation, said Colonel Ryan Dillon, spokesman for the coalition in Baghdad.

The loss of the Kirkuk oil fields could cripple the Kurdish region’s economy, costing 70% of its daily oil production, said Luay al-Khatteeb, director of the Iraq Energy Institute in Baghdad.

“You cannot sustain a state with only 30% of your oil production,” he said.

Kurdish operators are producing 790,000 barrels a day, including 550,000 barrels from Kirkuk province and other disputed areas, Khatteeb said. The region exports 590,000 barrels per day, with the rest used for refineries and domestic consumption.

Oil analysts say the region earns about $8 billion a year from oil exports. Baghdad, which has accused the Kurds of stealing the oil, halted federal payments to the Kurdish region in 2014.

Iraq’s military triumph over the Kurds came as the coalition continued to battle Islamic State militants clinging to a strip of desert land and the border town of Qaim in western Anbar province near from the Syrian border. Iraqi forces, sometimes aided by Kurdish fighters, have driven the militants out of most of Iraq since they took control of nearly a third of the country three years ago.

Elsewhere in Iraq on Tuesday, Iraqi militiamen allied with government troops took control of disputed areas in and around Sinjar, a northern region populated by Yazidis, a religious minority. A Yazidi militia commander in Mosul said pesh merga fighters withdrew from the area as part of a negotiated deal.

More than 2,000 Yazidis were massacred in 2014 by Islamic State militants who enslaved Yazidi women and girls. The town of Sinjar was liberated in 2015 by pesh merga fighters backed by US airstrikes.

In the northern city of Mosul, a commander of Iraqi military units said in a telephone interview on Tuesday that the Iraqi government was negotiating with Kurdish leaders over a Kurdish withdrawal from disputed areas around Mosul near the Kurdish Autonomous Region.

The commander said the pesh merga forces have already withdrawn from some local areas, known as the Nineveh plains in Nineveh province. He asked not to be identified as he was not authorized to speak to reporters.

To the south, the Iraqi military command in Baghdad said Iraqi troops had taken control of several disputed areas in Diyala province held since 2014 by pesh merga forces, which withdrew early on Tuesday.

In a sign that life in the city of Kirkuk is returning to normal, hundreds of families – mostly Kurds – who fled the city when Iraqi forces entered on Monday have started to return to their homes.

Mr Abadi assured Kurdish civilians that they would be protected by Iraqi forces and federal and local police. Kirkuk, a multi-ethnic city of around one million people, is made up of around 45% Kurds, 38% Arabs, 15% Turkmen and 2% Christians.

The roads linking Kirkuk to Baghdad and Erbil, closed during the military operation, were reopened on Tuesday.

“We are all Iraqis,” Major Mohammed Ismael, commander of the Iraqi government’s counter-terrorism troops in Kirkuk, said in an interview. “Kirkuk is now back in the heart of Iraq.”

Ali Riyad, 28, an Iraqi army soldier dining at an expensive restaurant in Kirkuk on Tuesday, said: “We came to Kirkuk yesterday, and today I am having lunch at this beautiful place. It was easier than expected. »