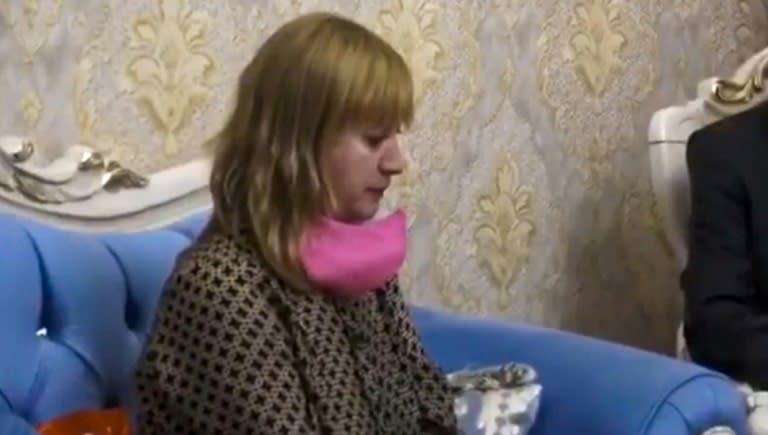 Baghdad (AFP) – A German woman kidnapped in Baghdad this week was released overnight and handed over to her embassy, â€‹â€‹officials from both countries said on Friday.

Interior Minister Othman al-Ghanemi handed over Mewis to the German embassy in Baghdad, the ministry said.

A video released by the ministry showed Iraqi officials and German diplomats with a tired-looking Mewis.

German Foreign Minister Heiko Maas said he was “relieved” that Mewis had been released, confirmed that she was at the embassy in Baghdad and thanked the Iraqi government.

Mewis has worked in the Iraqi capital since 2013 and was one of the few Westerners to live outside the Green High Security Zone, where most diplomatic missions are located.

She ran artistic programs at the Iraqi collective Beit Tarkib and was close to many young photographers and painters.

Mewis was leaving her office in central Baghdad on Monday evening when unidentified assailants in two cars, including a white van typically used by Iraqi security forces, abducted her.

Police from the local police station witnessed the kidnapping but did not intervene, the source added.

Dhikra Sarsam, a friend of Mewis, said she has been in contact with her since her release.

“She told me that she was fine and that she had not been mistreated” in police custody, Sarsam told AFP.

â€œShe will be going to Germany very soon.

The identity of his captors and the reason for his abduction were still under investigation as details of his release came to light.

Mewis was found in an abandoned building, the Interior Ministry said.

A security source told AFP that she was released from a location in Sadr City, a densely populated area in eastern Baghdad where security forces have tried unsuccessfully for years to impose the law and order.

“A few hours after his kidnapping, security forces arrested a man who accused several people (allegedly) belonging to a faction close to the Hached al-Chaabi,” the source said.

The man was then released and security forces were able to pressure the kidnappers to release Mewis, the source added.

Hard-line supporters within Hashed, a state-sponsored network of armed groups, many of which are backed by neighboring Iran, have been accused of kidnapping or intimidating Iraqi militants in the past.

The Hashed made no official statement on Mewis’ kidnapping, but on Friday a spokesperson said he hoped Iraqi authorities would investigate how she had been “secretly” present in Baghdad without security clearance.

Moqtada Sadr, a populist and divisive Shia cleric, hailed Mewis’ release and called her a “guest.”

Mewis had expressed concern over the murder earlier this month in Baghdad of Iraqi academic Hisham al-Hashemi, who supported last year’s anti-government protests, according to Sarsam.

Around 550 people have died in violence linked to the protests, including two dozen activists shot dead by unidentified men, usually on motorcycles.

Dozens more were kidnapped, some of whom were later released near their homes. The fate of the others remains unknown.

Amnesty International called the incidents a “growing murderous campaign of harassment, intimidation, kidnappings and deliberate killings of activists and protesters”.

This year has seen a worrying increase in kidnappings of foreigners, which had not been targeted for several years.

In both cases, neither the kidnappers nor the conditions of release of the hostages were revealed.

Prime Minister Mustafa al-Kadhemi’s government is the focus of pro-Iran groups because it repeatedly tried to cut off their wings when the prime minister was intelligence chief.

But the government has repeatedly called on armed factions to hand over their weapons and dismantle checkpoints, and analysts say this pressure could be behind the recent surge in violence in Baghdad.

Meanwhile, on Friday, four rockets targeted a base used by US soldiers south of the capital without causing any casualties, the military said, the latest in a series of attacks in recent months.