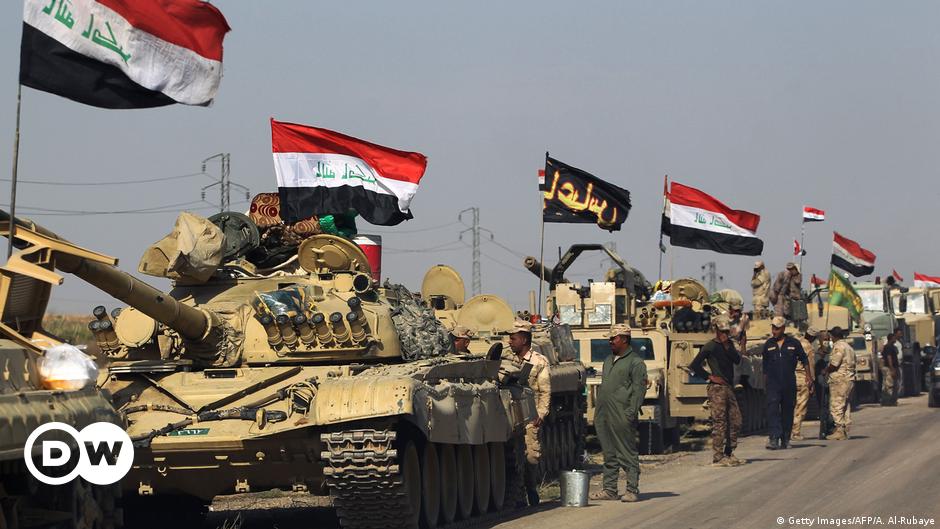 Iraqi troops on Thursday launched an offensive to retake the last stronghold of the “Islamic State” (IS) in their country, the western cities of al-Qaim and Rawa in the province of Anbar.

“Daeshis have no choice but to die or surrender,” Prime Minister Haider al-Abadi said, using Arabic shorthand for IS militants.

According to Iraqi media, the US-led air alliance was taking part in the assault across the Euphrates Valley towards the two Sunni Arab towns. For years, al-Qaim has been a stronghold of the Sunni Arab insurgency.

Military sources said a key regional military base and an air base had been found abandoned by IS. Iraqi forces had also taken over half a dozen villages.

Last stronghold of IS

This has left the jihadists confined to a small part of the valley linked to the remaining territory in Syria where they also face Russian-backed Syrian government forces.

Prior to the assault, thousands of Iraqis had fled the area to displacement camps near Ramadi, the capital of Anbar, said the Norwegian Refugee Council (NRC), which provides aid in the area.

Fierce fighting in recent months has already seen Baghdad score several victories against IS, mostly driving them out of Mosul, Iraq’s second-largest city, in July.

Last month, Iraqi troops liberated the town of Hawija, the group’s last stronghold in the north of the country. In total, government fighters have taken over 90% of the vast swaths of its land, which was seized by IS during its 2014 sweep of Iraq and Syria.

Armed conflict with the Kurds

However, the new offensive on al-Qaim and Rawa came as Baghdad appeared to be reigniting armed conflict with the semi-autonomous Kurdish region of the country. On Thursday, Kurdish authorities said government soldiers had begun attacking their forces in the disputed, oil-rich province of Nineveh.

“They are advancing towards peshmerga positions,” the regional government said.

The assault was close to the route of a strategic oil export pipeline aimed at restoring the Iraqi central government’s direct oil exports via Turkey.

US calls for focus on defeating ISIS

Since 2014, when IS swept through northern and western Iraq, Kurdish peshmerga fighters have played a vital role in the fight against jihadists, with the US-led alliance often relying on their regional expertise.

While the Iraqi government has made progress against ISIS, it has also attempted to tighten federal control over pro-independence Kurdish areas, forcing Kurdish authorities to abandon its main source of funding, the rich oilfields of Kirkuk, in a blow to the self-sufficiency of the region.

The top US general in Iraq, Lt. Gen. Paul Funk, on Thursday called for an end to “Iraqis killing Iraqis, when we have Daesh to kill in the west.”

Another US military spokesman, Ryan Dillon, said the fighting had “negatively impacted coalition efforts to defeat ISIS. [another acronym for IS]in particular the inability to move military equipment and supplies to our partners in Iraq and Syria.”