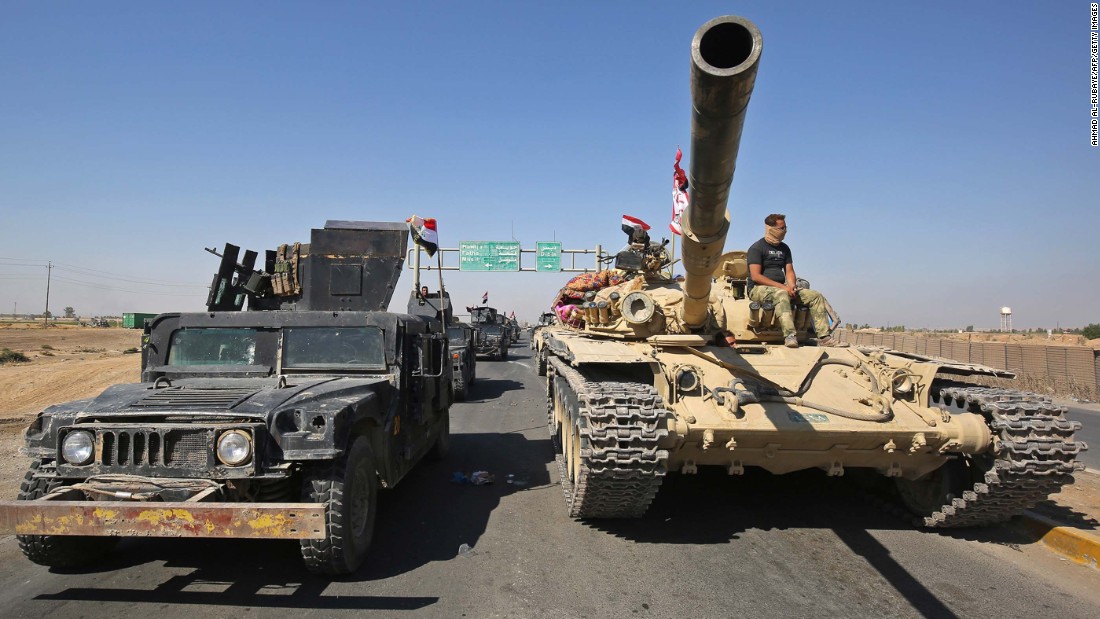 Forces entered the disputed city on Monday and set up checkpoints around its perimeter, while witnesses saw a single Iraqi flag flying atop the governor’s seat. The building usually houses the Kurdish and Iraqi flags.

The city’s breach came after Iraqi forces crossed two fronts on the outskirts of Kirkuk, seizing key oil fields and a military base, among other valuable assets. Earlier Monday, Iraqi counter-terror forces said they would not enter the city proper.

The operation was ordered by Iraqi Prime Minister Haider al-Abadi, who sent federal forces to the area to impose security and called on Kurdish peshmerga forces to cooperate with them. The majority of Kirkuk’s local police have remained and are working with federal agents.

His order came just weeks after a Kurdish independence referendum claimed Kirkuk as their own, causing consternation in Baghdad. The city – among the region’s most coveted territories – lies outside the internationally recognized Kurdish Autonomous Region in northwestern Iraq.

The Iraqi operation is backed by the Popular Mobilization Units, an Iran-backed militia that has helped expand Tehran’s influence in the Middle East.

A dilemma for the United States

The Iraqi operation, which began on Sunday evening, was the clearest indication yet of Baghdad’s determination to curtail Kurdish territorial ambitions.

It pits two key US allies against each other, highlighting the complexities for Washington in the fight against ISIS – the US arms and supports both Iraqi forces and Kurdish fighters. This again raises the long-unanswered questions about how the territory could possibly be divided along ethnic lines.

The US State Department issued a statement Monday evening saying that the United States “is very concerned by reports of violence around Kirkuk” and that Washington is “closely monitoring the situation”.

“We urge all parties to avoid provocations that can be exploited by enemies of Iraq who are interested in fueling ethnic and sectarian conflicts,” the statement said. “In particular, we note that much work remains to be done to defeat the Islamic State in Iraq, and that continuing tensions between Iraqi and Kurdish forces are distracting attention from this vital mission.”

The US-led coalition had previously played down the overnight clashes, saying in a statement it was ‘aware of reports of a limited firefight’ in the pre-dawn darkness, saying this appeared to be “a misunderstanding and not deliberate as two elements attempted to connect in conditions of reduced visibility.”

The statement made it clear that she did not support any of the parties near Kirkuk.

The Kurdistan Regional Security Council said Kurdish fighters were attacked using “US military equipment, including Abrams tanks and Humvees”. He added that the peshmerga destroyed a number of these Humvees.

In an interview with CNN, Bayan Sami Rahman, the representative of the Kurdistan Regional Government in the United States, blamed the Iran-backed militia for the night’s fighting. But she still called for dialogue with Baghdad.

“Our offer of dialogue with an open agenda remains on the table,” she told CNN on Monday. “We urge our friends to use (their) leadership role to prevent war.”

The large province of Kirkuk has one of the largest oil deposits in the country – more than 6% of the world’s oil comes from the region.

By Monday, Iraqi troops had taken control of several oilfields, including the key Baba Karkar oil and gas field and the K1 military base, among other assets, Iraqi counterterrorism spokesman Sabah al-Terror told CNN. Noman.

Iraqi forces fled Kirkuk in 2014 as ISIS fighters attempted to secure the territory, shortly after taking over the city of Mosul and establishing their so-called Islamic caliphate in the northwest of the country.

The Kurds, however, sent in their fighters and claimed the city.

Kirkuk was historically a Kurdish-majority Iraqi city, but during his reign ousted dictator Saddam Hussein moved Arab families and Kurdish families to change the ethnography of the region, within the framework of a policy called “Arabization”. It is also home to Sunni Arabs and Turkmens.

The city has suffered a series of major attacks over the past decade from extremists, including Al-Qaeda in Iraq, mainly targeting security forces.

After Saddam’s fall, Kurds began to return to Kirkuk, repopulating the city and surrounding areas in the event of a possible referendum on whether the city should be part of a future Kurdistan or remain in Iraq.