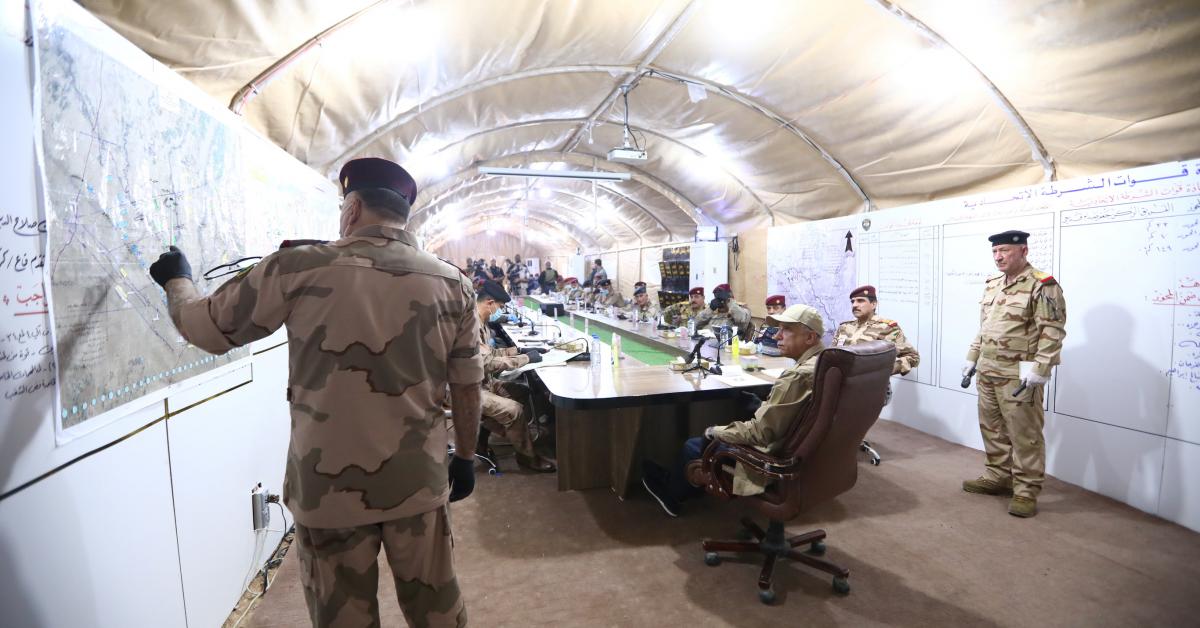 Iraqi forces team up for anti-ISIS operation in Kirkuk

The Iraqi armed forces launched Tuesday at dawn a large-scale operation entitled “Heroes of Iraq – Victory of Sovereignty” to eliminate the remnants of the Islamic State in the northern province of Kirkuk. The operation precedes key talks with the United States later this month.

Prime Minister Mustafa al-Kadhimi visited the operation in the early hours and social media was subsequently inundated with photos of him marching alongside forces and members of a local family. He then spoke of the operation during a council of ministers regularly scheduled in the capital.

Kadhimi was sworn in on May 6 after several months of government vacuum.

Attacks and intimidation continue in the southern regions of Kirkuk province against residents and the various forces deployed there, as well as in the neighboring towns of Diyala and Salahuddin. However, Kirkuk’s strategic location and contested status give it special importance.

The operation aims to clean both the oil province of Kirkuk, disputed between the Kurdistan Regional Government (KRG) and the central government of Baghdad but back under Baghdad control since the end of 2017, and Salahuddin.

Weapons caches, hiding places, IEDs and other supplies were found and at least two “terrorists” were killed during the operation on Tuesday, according to a statement from the Iraqi media security cell.

US-led international coalition spokesman Col. Myles B. Caggins III noted in a voicemail message to Al-Monitor on Wednesday that “Iraqi security forces are focusing considerable energy on defeating the remains. “ISIS” south of Kirkuk and along the Hamrin-Makhmour. mountains, the plains of Nineveh and parts of the Anbar.

â€œThe coalition continues to support with high-level advice,â€ he continued. â€œThere were military officers who participated in the planning process. We exchanged information and on the first day of the operation we carried out three airstrikes in support of the Iraqi security forces on the ground. This area had a presence of [IS] reluctant because of the terrain. The relief, the topography are difficult to access. There are mountain and cave complexes and because the Iraqi people reject “IS,” he said, the international terrorist organization “has been forced into the mountains and desert areas, where it is located. drives to villages on motorcycles to commit crimes to raise funds “or to commit” acts of terror or attacks against the security forces “.

Caggins stressed that the “Heroes of Iraq campaign will unfold in stages throughout 2020” and brings together several forces from the Ministries of Defense and Interior as well as Sunni and Shiite Popular Mobilization Units (PMU ).

Bringing together the Home Office, the Defense Ministry and the PMU in a vaguely reminiscent way – albeit on a much smaller scale – as seen in the war against ISIS between 2014 and 2017 , the operation may also aim to boost morale, provide a show of force and foster a sense of unity.

During a press conference posted on YouTube Tuesday at the end of the day, the spokesperson for the commander-in-chief of the armed forces, Brigadier. General Yahia Rasoul detailed the operation.

The name “Victory of Sovereignty” may be a refutation of the often heard accusations that Iraq is under undue influence or under the control of the United States or Iran.

Since former Prime Minister Haidar al-Abadi declared victory against ISIS on December 9, 2017, Iraq has struggled to cope with reconstruction efforts and the return of displaced citizens to their areas of origin. , non-state actors, economic hardships, regional tensions and remnants of ISIS. . The United States and Iran have provided support in various ways and maintain a geopolitical interest in the country.

Protests over unemployment and the lack of public services in the Iraqi oil capital of Basra in 2018 were followed by massive protests in the center and south of the country from October 2019 that toppled the government months later.

At the beginning of June, the demonstrations continued to limp and sometimes ignited in certain places of the country, even after the swearing-in of the new government. Many protesters claim that armed groups backed by Iran are behind the deaths of several hundred people who have lost their lives. their lives. Chants and placards held aloft during the first few months denounced American and Iranian influence, with â€œwe want a homelandâ€ a popular rallying call.

Meanwhile, IS sleeper cells have long taken advantage of security gaps between the KRG and central government territories as well as lingering grievances from parts of the population.

The last IS-held town to be recaptured from Iraq was Rawa, in western Anbar, in 2017, but Hawija and neighboring villages in Kirkuk province were not left until after the Battle of several months to return to Mosul.

This journalist accompanied PMU Liwa Ali al-Akbar during the October 2017 operation to clean up Hawija. The battle was surprisingly easy compared to the bitter fighting for the various districts of Mosul and other parts of the country in which it had also accompanied the Iraqi forces.

Many claimed at the time that the IS fighters who had withstood such a long siege simply disappeared, while others claimed they had shaved their beards and fled to the KRG or to the nearby Hamrin Mountains, which serve as a dividing line between the western part of the Kirkuk region and the northeastern part of Salahuddin.

The Hamrin mountain range stretches from this point to near the Iranian border in Diyala province – which has seen the most attacks for months – and has long been what some Iraqi Kurds consider the border of a future independent state.

Several arms caches were discovered and two soldiers were injured by IS fire from tunnels during an operation in December 2017 in the Hamrin Mountains. This journalist accompanied the local forces a few weeks after the national declaration of victory against the international terrorist organization.

The current one aims to clear an area that may continue to pose a problem until several thorny issues are resolved between the KRG and Baghdad. Nonetheless, it serves to show Iraq’s continued commitment to combating ISIS amid a host of challenges facing the new government.