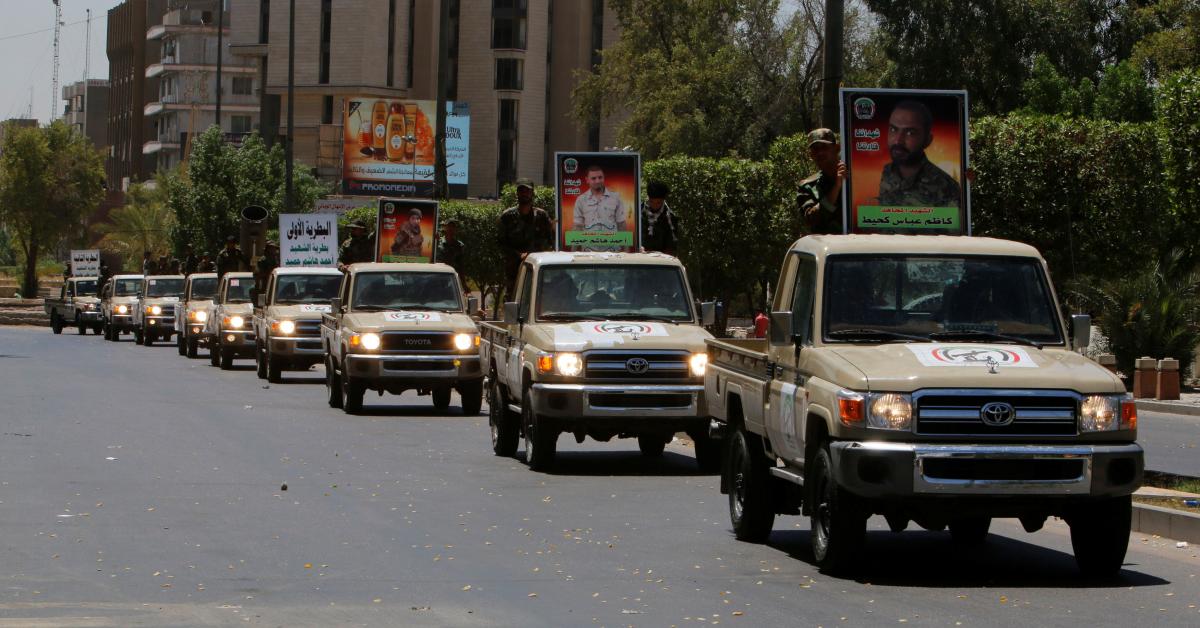 The Iraqi popular militias do not plan to merge with the army, reports Jean Aziz from Beirut, where a meeting was held between diplomats and Western representatives, non-governmental organizations and heads of Iraqi Popular Mobilization Units (PMU).

“We will be a military force that is part of the Iraqi state, but not part of the Iraqi army. This is due to many reasons that we explained to them, namely the corruption that has spread within Iraqi government institutions, and I think they understood our point of view. We made it clear that we would be an alternative army subordinate to the state, just like Iran [Islamic] Revolutionary Guard Corps,” an Iraqi militia leader told Aziz.

The PMU official sought to downplay the perception of the militias as sectarian and instead emphasized the good faith of the PMU as Iraqi nationalists, rather than Shiite supporters.

“We have no other enemy in Iraq than terrorism and the extremist organizations represented by the Islamic State [IS], and we have no problem with any other party,” the PMU official said. “With regard to our relations with the various components of the Iraqi people, we underlined that the PMU came from all layers of the Iraqi people. Western participants noticed from the beginning of our meetings that our delegation is made up of members representing the different spectrums of the Iraqi people, since we have included Shiite leaders, two commanders of Sunni factions within the PMU as well as a commander of a Christian faction. As for the neighboring countries, we explained that we wanted our country to be sovereign and stable and open up to its regional environment. This is what we will seek to achieve. »

Russian President Vladimir Putin and Turkish President Recep Tayyip Erdogan met on August 28. 9 to bury the hatchet over Turkey’s downing of a Russian Su-24 in November 2015, but Paul Saunders writes that “despite the important common strategic interests that have energized Russian-Turkish relations for more than a decade, Moscow and Ankara are not easy partners”.

Not surprisingly, despite talk of increased economic cooperation, the biggest obstacle to improving relations remains differences over Syria. Maxim Suchkov reports: “Erdogan’s stance on other forces fighting in Syria reflects his domestic concerns. He [Erdogan] called the listing of Jabhat al-Nusra as a terrorist organization a “wrong approach” while failing to do the same with the Syrian Democratic Forces [which include Syrian Kurdish armed groups]. ‘If the fight [the Islamic State] is the criterion of an allied group, then Jabhat al-Nusra should not be considered a terrorist group.'”

On the day of the Putin-Erdogan summit, Vitaly Churkin, Russian Ambassador to the United Nations, said: “Turkey must understand that including the Kurds in the discussion is one of the things that should be important for sovereignty and the territorial integrity of Syria. . And Turkey has a direct interest in the territorial integrity of Syria. There are complicating factors on the minds of the people of Ankara, but this is something that we believe should be done as soon as possible.

At a closed-door UN Security Council meeting on Syria, Churkin allegedly chastised Turkey for not doing more to shut down supply lines to terror groups in Syria, according to Foreign Policy.

The reset of Russian-Turkish relations, however limited, also cannot be separated from a broader decline in NATO-Turkey relations, as Metin Gurcan has reported. A flashpoint is Turkish Vice Admiral Mustafa Zeki Ugurlu, who had been assigned to NATO’s Allied Command Transformation in the United States. On July 12, three days before the failed military coup against Erdogan, Turkey issued an arrest warrant for Ugurlu over alleged links to the Gulen movement. NATO did not end Ugurlu’s mission and even allowed him to represent Turkey at a NATO industrial workshop on July 26, more than a week after a second term after the attempted of coup. Ugurlu has since disappeared, fueling suspicions in Turkey of US and NATO complicity in the failed coup.

Gurcan concludes: “The coup attempt has certainly opened a new existential fault line in Ankara-NATO relations, already shaken by the Syrian crisis, the refugees, the fight against the Islamic State and the Workers’ Party of the Kurdistan, and the balance of power in the eastern Mediterranean and in black Africa. Sea. NATO seems to prefer a low profile in its relations with Turkey. In turn, Ankara interprets this as a lack of adequate support. It is not surprising that the Turkish public took the same position.

It’s time to close the US-Russian deal on Syria

The Pentagon warned Damascus on August 19 to avoid hitting US and coalition-backed forces after Syrian airstrikes targeting Kurdish positions in Hasakah, prompting the US to jam its own fighter jets for the protect.

The incident represents the latest compelling reason for the United States and Russia to conclude negotiations aimed at deepening military and intelligence coordination on Syria as soon as possible. Both countries are looking to avoid any potential mishaps or miscommunication that could lead to an escalation. In this specific case, it also seems to us that the United States and Russia might have a common interest in preventing the Assad government’s attacks on Syrian Kurdish positions, given that Washington and Moscow, to varying degrees and for different, say the Kurds of Syria.

Another reason to strike the deal is US concern over Russian airstrikes on ISIS positions in Syria from Iran, which some US officials say could violate Security Council Resolution 2231. UN Security, which requires Security Council approval for the supply, sale or transfer of fighter jets to Iran. .

While interpreting the resolution may require “very detailed legal analysis,” according to a State Department spokesperson, it might also be helpful to recall UN Security Council Resolution 2249, passed in November. 2015, which “calls on Member States which have the capacity to do so to take all necessary measures, in accordance with international law, in particular the Charter of the United Nations, as well as international human rights law, of refugees and humanitarian law, in territory under the control of ISIL [IS] also known as Daesh, in Syria and Iraq, to ​​redouble their efforts and coordinate their efforts to prevent and suppress terrorist acts committed specifically by ISIL also known as Daesh as well as the ANF [Jabhat al-Nusra], and all other individuals, groups, companies and entities associated with Al-Qaeda and other terrorist groups, as designated by the United Nations Security Council.

So, while there may be a dispute over resolution 2231, it seems to us that coordination by Iran and Russia to “prevent and suppress” ISIS through military action is a matter of the spirit if not the letter of resolution 2249, and the general interests of the United States and the coalition in Syria.

This column has consistently argued that the United States should seek to leverage shared Russian and Iranian interests in countering terrorist groups in Syria and throughout the region, as called for in Resolution 2249 and numerous other resolutions. In September 2014, commenting on the emergence of the Iran-Syria-Iraq counterterrorism axis against ISIS, we acknowledged that while “the United States and Iran cannot formally link arms in Syria…the tendency to watch is the timid emergence of what could be a true regional entity. counterterrorism coalition, with the potential to transform regional security, if managed carefully.

Nearly two years later, the “transformative potential of regional security” brokered by the United States and Russia through the United Nations seems both within reach and more urgent than ever.