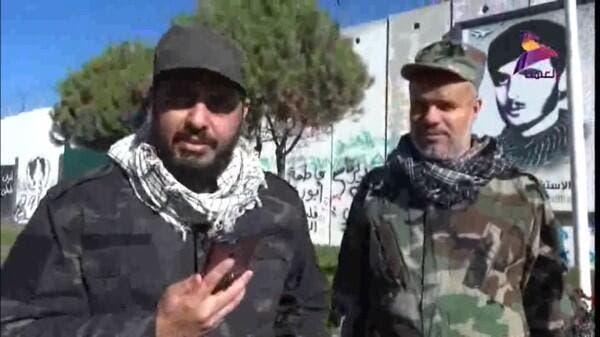 An Iranian-backed Iraqi militia leader was filmed at the Israeli border, saying he was “completely ready to support the […] Palestinian cause against the brutal Israeli occupation.

He then appears at the Fatima Gate border post, where he signals that his militia will stand alongside Lebanese Hezbollah, another Iranian ally.

The streak comes days after US President Donald Trump announced he would move the US embassy in Israel to Jerusalem, sparking anger in the Muslim world.

With an army of 10,000 Iraqi foreign fighters (as of 2015), this militia could significantly strengthen Hezbollah’s resistance on the Israeli border as tensions between Israel and Lebanon increase.

Asaib Ahl al-Haq, who is armed and trained by the Iranian Quds force, was among several of the powerful Iraqi Shiite militias to respond to Trump’s decision

The Peace Companies, the armed wing of militias controlled by the Shiite cleric Muqtada al-Sadr, announced the formation of a brigade “to defend Jerusalem”.

“From tomorrow we will start registering the names of volunteers in all Iraqi provinces to defend Jerusalem,” spokesman Safa Tamimi told Rudaw on Friday.

â€œWe will arm, train and classify volunteers according to their specialty once registration is complete,â€ he said.

The unit was formed “in response to Donald Trump who tried to put Jerusalem within the framework of Zionist conquests and declared it the capital of Zionism,” Tamimi added.

According to Tamimi, the new anti-Israel brigade will not be part of the Iraqi state-sponsored Popular Mobilization Forces fighting ISIS, unlike Asaib Ahl al-Haq and the Peace Companies.

Unlike most Iraqi Shiite militia leaders, Sadr is not aligned with Iran and has held meetings with Saudi and Emirati leaders.

Sadr supporters, who have been behind a popular protest movement in Iraq in recent months, have also taken to the streets to demonstrate against Trump’s decision.

Another Iranian-backed militia, Harakat Hezbollah al-Nujaba, made headlines after saying Trump’s decision on Jerusalem could justify attacks on US troops in Iraq.

“Trump’s stupid decision to make Jerusalem a capital for the Zionists will be the great spark to remove this entity from the body of the Islamic nation, and a legitimate reason to target American forces,” said group leader Akram al- Kaabi, according to Reuters.

There are more than 5,000 American soldiers stationed in Iraq where they support the fight against ISIS in the north of the country. Employees of the American embassy in Baghdad have reportedly been ordered to restrict their activities.

However, many ordinary Iraqis have expressed cynicism about their involvement in the Palestinian-Israeli conflict.

“Let us take care of the youth of our homeland, rather than fighting in the countries of the world,” Mohsin Algbory commented on Facebook.

Sura Muhammad added, â€œWe have no shortage of wars and bloodshed, free our country from the corrupt and thieves who have starved our people.

Many comments referred to Palestinians who had joined ISIS in Iraq, allegedly including suicide bombers in Iraqi cities.

Others have complained about the influence of the militias, which are seen by outside commentators as a thorn in the side of post-ISIS Iraq.

It has been suggested that al-Khazali’s posture on the Israeli border may have more to do with internal Iraqi politics and a rivalry against Sadr’s militia than any real intention to act on Jerusalem.