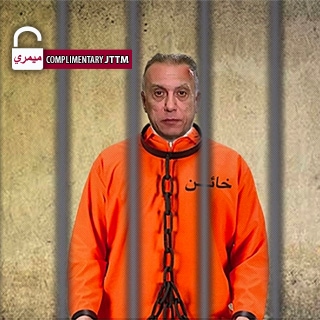 On July 13, 2022, the office of Iraqi Prime Minister Mustafa Al-Kadhimi announced that he would attend the summit scheduled in Saudi Arabia on July 16, 2022, which is also expected to attend the leaders of the countries that are members of the Gulf Cooperation Council ( CCG) – Egypt, Jordan and USA[1]

According to the media, one of the main issues to be discussed at the summit is the establishment of a regional defensive alliance in the Middle East, similar to the NATO model, to deal with security threats, in particular from the ‘Iran. It has also been reported that Israel is expected to participate in the alliance.

Iran-backed Shia militias in Iraq quickly reacted furiously to Al-Kadhimi’s decision to join the summit. They claim this is further proof of his “collaboration” with the United States and his “betrayal” of the Iraqi people. Elements of the militias have warned that he will be brought to justice for violating the law prohibiting normalization with Israel passed by the Iraqi parliament on May 26, 2022.

Here’s a look at the reactions to the announcement:

Hezbollah Brigades: Al-Kadhimi to be tried for treason; We will take action against the planned US-led coalition

On July 13, 2022, Hezbollah Brigades spokesman Abu ‘Ali Al-‘Askari posted a message on his Telegram channel, part of which reads: “More than once we have warned of the danger posed by Kadhimi the traitor, and of a situation in which things may deteriorate [if he remains prime minister]. It is clear today that the situation in Iraq is intolerable and continues to deteriorate. There is no doubt that this collaborator is one of the main factors of the deterioration. Al-Askari warns: “In the very near future, Kadhimi will be tried for his crimes, the most recent of which is the attempt to lead Iraq towards normalization. with the oppressive entity [i.e. Israel].”

Al-‘Askari says that if Iraq descends into anarchy or civil war, those who worked to incite them will pay the price, starting with the Saudi regime, the United Arab Emirates, “and those who support them , United States”

The Hezbollah Brigades spokesman also brings up reports of US efforts to establish a regional coalition that will fight threats from Iran, and predicts that it will be a resounding failure and that Hezbollah will fight it with strength. He compares the coalition to the army of Al-Sufyani who, according to Shia eschatology, is an evil figure who will fight Mahdi the messiah, although his fate is to drown in the Syrian deserts. He states that if the coalition is like Al-Sufyani’s army, then its end is known, however, “if it is not like it, then we will be the ones to inform it of its end in Iraq”.[2]

A poster bearing Al-‘Askari’s words, which threaten that Al-Kadhimi will soon be tried for his crimes, was posted on the Hezbollah Brigades’ Telegram channel. In the poster, Al-Kadhimi is pictured behind bars, in handcuffs and a chain around his neck wearing a prison jumpsuit with the word “traitor” stamped on it.[3] 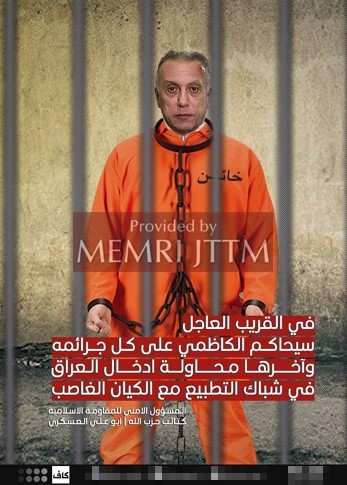 Several hours after the Iraqi Prime Minister‘s Office announced Al-Kadhimi’s planned participation in the summit, Al-Tahira Editor, a Telegram channel which is a subsidiary of the Sabereen News Telegram channel, shared a series of anti-Kadhimi posters warning that attending “Biden’s planned normalization conference” is treason and directly violates the law that prohibits normalization with Israel, and anyone who does will not escape punishment.[4] 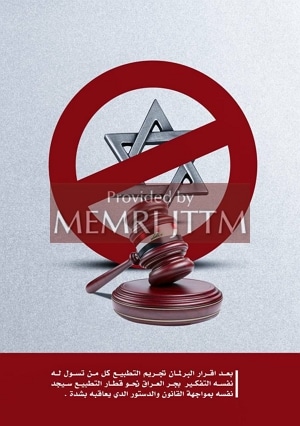 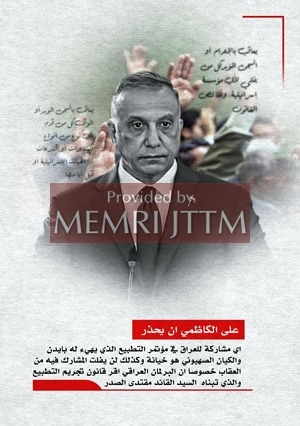 Another poster shows Al-Kadhimi standing wrapped in an Israeli flag and partially obscuring the symbol of Saudi Arabia, above text asking how Iraqi politicians will justify attending a summit that calls for normalization with Israel, and how the Iraqi people will react to efforts to push them towards such normalization. 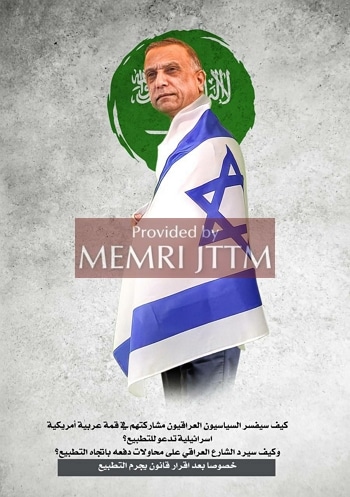 Al-Tahira’s editor also shared a short graphic video showing Al-Kadhimi with President Biden from July 26, 2021, when the Iraqi Prime Minister visited Washington. A picture of Al-Kadhimi with Saudi Deputy Defense Minister Khalid bin Salman is also shown. The hashtag #KadhimiAtTheNormalizationSummit appears throughout the video. A message that accompanies the video reads: “Anyone who normalizes relations with Israel, we will cut off his head and his hands. 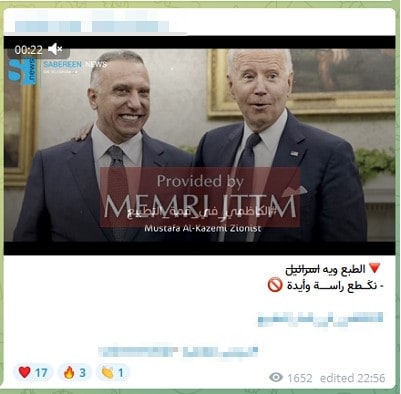 Purpose of Biden’s visit: Israel’s security; The United States abandons its allies and its values

Al-Tahira Editor Telegram channel also shared several anti-US posters, which claim that the purpose of Biden’s visit is to ensure Israel’s security and nothing more, and question whether Iraq has an interest. later to participate in the summit and the normalization process. . 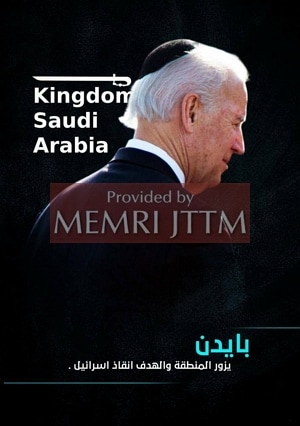 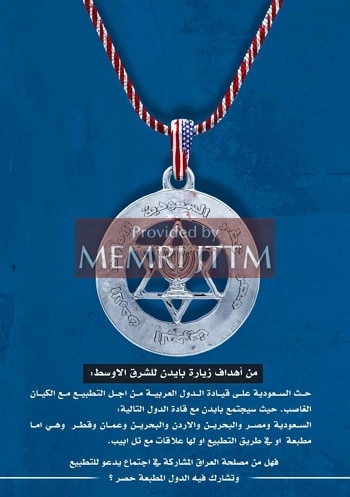 One of the posters shows a pair of hands holding a slingshot in the colors of the Iraqi flag, preparing to throw stones at the Statue of Liberty which is waving, one in each hand, the Saudi flag and the Israeli flag. 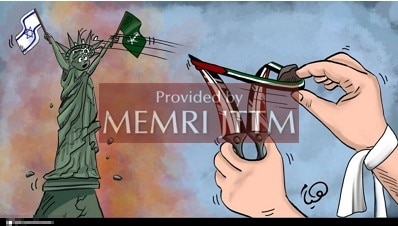 Other posters warn Iraqi politicians to beware of American promises, stressing that the United States has not hesitated to abandon its allies when it suits its objectives. 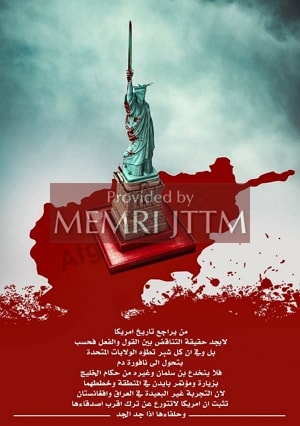 The text of another poster claims that Biden has abandoned his principles and the promises he made during his election campaign, and that he is cooperating with Saudi Crown Prince Mohammed bin Salman, suspected of being involved in the murder. in Turkey of the Saudi journalist Jamal Khashoggi. . 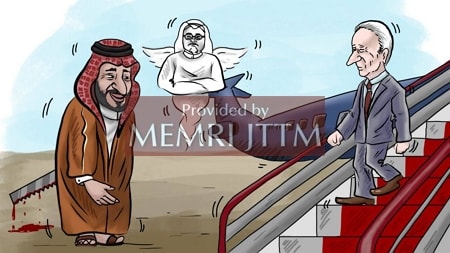 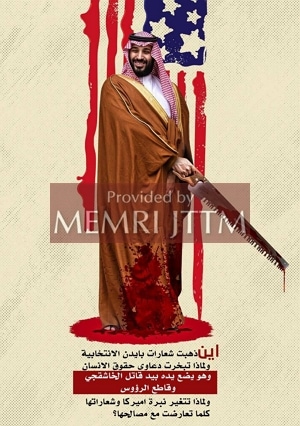 Biden’s trip masks US still at war in Middle East