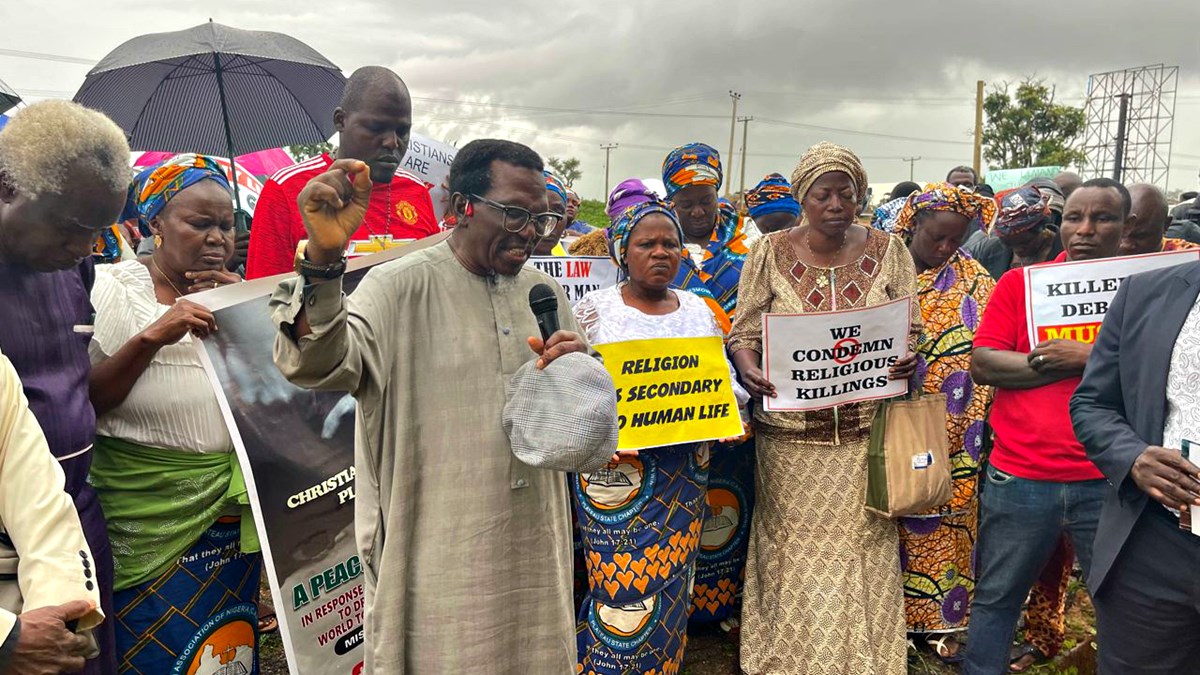 Thousands of churches across Nigeria demanded an end to sectarian killings on Sunday, horrified by a crowd onslaught on a university student accused of blasphemy. But fearing more violence, their approach differed significantly by geography.

“The overwhelming majority of our southern churches participated, many took to the streets to protest peacefully,” said Testimony Onifade, Senior Special Assistant to the President of the Christian Association of Nigeria (CAN). “Coming together, we condemned this horrific act and called on the government to identify, arrest and prosecute the culprits.”

But in the north, where Muslims make up the majority of Nigerians, John Hayab described 20 minutes set aside to pray for divine intervention. The chairman of the Kaduna state branch of CAN hailed the “solemn” ceremony observed by all faiths in the north, amid a ban on protests by local authorities after some Muslims had threatened counter-protests.

Instead, a select group of 120 Christian leaders gathered at a church in Kaduna town, guarded by police and security agencies.

There were good reasons to be cautious.

Two weeks ago, in Nigeria’s most northwestern state of Sokoto, Deborah Samuel was beaten to death and set on fire by fellow students from Shehu Shagari College of Education. Officials and the police intervened in vain.

Two students were arrested. In protest at their release, Muslim supporters proceeded to destroy 11 additional buildings, descended on the Christian shops of the city, and besieged the palace of the sultan of Sokoto who had condemned the murder of May 12.

According to to his friend Rakia, Samuel’s last words were: “What do you hope to achieve with this?”

After a colleague shared Islamic material on an exam preparation social media group, Samuel posted an audio recording asking him to remove it. Friends who heard Muslim students deem her response blasphemous urged her to recant.

Instead, she replied, “Holy Ghost fire. Nothing will happen to me.”

Gideon Para-Mallam, the former Jos-based Africa Ambassador for the International Fellowship of Evangelical Students, joined the protests in the Middle Belt Plateau state.

He called for peace and restraint. But also, for an explanation.

“How is it that our young people behaved like this? He asked. “All those dreams and hopes for the future, destroyed in a few moments of deep evil.”

Nigerian Christians have circulated a radical imam’s video response with a picture of the slain former Boko Haram leader in the background.

“Whoever insults the prophet of God, kill him,” the imam said. “Don’t waste time telling the authorities, kill him.”

It’s been a bloody year.

open doors, which ranks Nigeria No. 7 on its global watchlist of the 50 hardest countries to be a Christian, account 896 civilians killed by Islamic extremists in the first three months of 2022.

Abubakar Shekau was confirmed dead last June, killed in an exchange of fire with the Islamic State West Africa Province (ISWAP). More than 40,000 activists rendered in the Nigerian government, while a large but unknown number of commanders joined their jihadist rivals.

The same week as Samuel’s murder, ISWAP released a video depicting the execution of 20 Christians.

“Christians all over the world should be impressed by the testimony of these men,” declared Jo Newhouse, spokesperson for Open Doors in sub-Saharan Africa, “who, as far as we know, has retained her faith even in the face of execution”.

Formed in 2014 to confront ISIS in Syria and Iraq, a coalition of 84 nations announcement alarm in Africa, where the pace of affiliate attacks far exceeds the parent organization in the Middle East. The 3,461 sub-Saharan murders in 2021 represent 48% of the global total of terrorists.

And in mid-April, Muslim Fulani herdsmen killed more than 150 Christian farmers in 10 communities in Plateau state. While some attribute the attacks to a lack of resources, Nigerian Information Minister Lai Mohamed declared there is now a “kind of holy handshake” between the bandits and Boko Haram.

Last year, Open Doors ranked Nigeria as a dastardly No. 1 in the categories of Christians killed (4,650) or abducted (2,510), as well as the homes and shops of Christians (a token tally of 1,000 each ) attacked, for denominational reasons. .

Deborah Samuel has put a face to the crisis.

“We consider this evil act to have been facilitated by successive governments that have failed to respond effectively to religious extremism and violence,” Para-Mallam said. “This impunity has gone on for too long.”

He called for an end to “jungle justice”.

Nigerian President Muhammadu Buhari quickly critical those who took the law into their own hands by promising an independent investigation. But former vice president and likely 2023 presidential candidate Atiku Abubakar deleted a tweet in which he condemned the murder.

a comment claims he would lose a million votes in Sokoto.

The original post was shared without his permission, he said. But while his explanatory memorandum affirmed his ability to take strong positions on issues, including Sharia, he did not comment on the victim.

The youth wing of CAN sworn to withhold the votes of any candidate who does not clearly condemn Samuel’s murder. The Non-Religious Southern and Mid-Belt Alliance declared Abubakar’s insensitivity was “not worthy” of a president.

Under the umbrella of Muslims United for Peace and Justice, 13 groups sentenced the slaughter. Para-Mallam expressed his appreciation for such a sentiment. Hayab said that in the north these leaders are few and unpopular.

But one of the 13, Muslim Rights Concern, took the opportunity to call for greater enforcement of the blasphemy law, and called for “deep soul-searching” by the Christian community in Nigeria to ward off intolerance.

This too asked for an investigation into a pastor in southwestern Osun state whose remarks in response to Samuel’s murder allegedly insulted Islam and could plunge the entire region into chaos and religious warfare, according to the Muslim group.

A government official, while condemning the murder, blamed Samuel herself.

“Muslims do not accept insults against [our] beloved prophet,” said Anas Sani, assistant to the finance minister in Sokoto. “May the carelessness of our tongues never push us to [an] falls early.

As a manhunt for the suspects is underway, the two students charged so far Face only two years in prison for conspiracy and incitement to disturb public order.

Regarding the blasphemy allegations in Nigeria, Mubarak Bala was sentenced to 24 years in prison in April after pleading guilty. In 2020, Omar Farouk has received a 10-year sentence, while Yahaya Aminu was sentenced to death.

All three are Muslims and Nigeria’s Supreme Court has overturned the last two convictions. But it has recognized blasphemy as a misdemeanor, punishable by death if found by a court.

Onifade chastised his country’s constitution for including Sharia.

“The blasphemy agenda is the latest plot to destroy vulnerable Christian minorities,” he said, placing him in line with Boko Haram terrorists and extremist Fulani herdsmen. “Fabricated by violent Islamists and Quranic masters, this conspiracy cannot be ignored by the international community.”

Muslims and Christians have fled their homes due to extremist violence, declared the UN, with 8.4 million people in need of humanitarian assistance in northwestern Nigeria alone. Half of them are facing a food crisis.

In response, Hayab called on citizens to arm themselves.

“Nigerian Christians, especially those of Nordic descent, have no choice but to defend themselves against bandits, terrorists and now religious fundamentalists,” he said, citing previous false examples. . “They will use every opportunity to kill, at the slightest allegation of blasphemy.”

Para-Mallam, who founded an eponymous foundation for peace, agreed that the law allows certain weapons in certain situations. He advocated for communities to protect themselves against attacks.

But all must conform to the teaching of Jesus.

“There is a thin line between self-defense and retaliation,” he said. “We must first focus on the just restoration of peace, to promote coexistence.”

The opposite produces a tragedy.

Samuel’s classmates desperately called for help. Police fired tear gas into the melee and then fired into the air. They withdrew, witnesses declaredwhen the students threw stones and hit them with sticks.

Which then turned against the accused.

“She pleaded for mercy, but it was far from her,” said Rakia, her friend. “What a cruel way to die.”