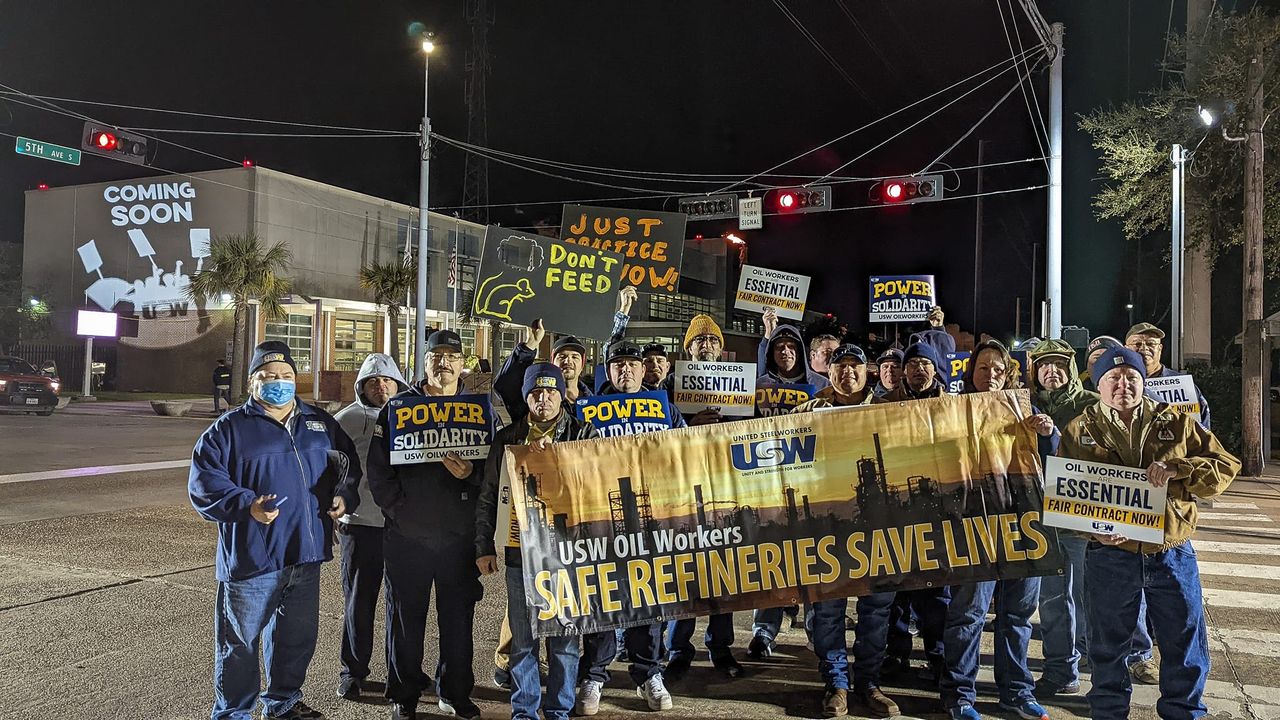 Oppose the threats and lies of the USW! Launch a nationwide strike to overturn the government-dictated sellout contract!

The United Steelworkers leadership is using every dirty trick in the book to push through its four-year deal, which would drastically reduce our real take home pay and give the oil bosses carte blanche to cut jobs, put our lives at risk and destroy the conditions of the next generation of refinery and petrochemical workers.

At BP, the USW is trying to push the national contract through a vote tomorrow without releasing the full deal and giving workers enough time to study and discuss it. As a brother at the BP refinery in Whiting, Indiana told us: “There is still no information on the contract we are voting on Thursday. Unreal. I heard from the vine that we could go and see the 32-page document in the lobby after work. Six weeks of discussions and we have a few hours to read it and decide. It’s not a valid vote…it’s a cattle call.

At USW Local 11-470 at the Phillips 66 refinery in Billings, Montana, USW International forced workers to vote again on the national agreement after rejecting it on March 4. In a “briefing” two days later, USW national representatives told workers that if they voted against the contract, then they would be on an economic strike, during which the company would be free to fire all union members and rehire whoever they wanted without any contractual protection.

In other words, the USW is threatening us, not the company, with a strike. He tells us, “If you go on strike, we’ll leave you alone, starve you on the picket line, and if you’re fired, you’ll be on your own. To drive home this threat, the USW cites the example of workers in Beaumont, Texas, whom the USW left on the picket lines for 10 months before signing a deal with ExxonMobil that gutted seniority rights, job classifications and quadrupled the probationary period to 24 months, creating a new tier of lower paid at-will employees to replace older workers.

It can’t hold. We have to fight and overturn this miserable agreement. We urge our brothers and sisters at BP and other companies to vote against and form the committee of oil workers to prepare for a national strike.

From the start, the USW has acted as an enemy of rank-and-file workers. Oil workers have never been in a better position to fight than this year. Companies are making record profits. Several key refineries, including Marathon’s Galveston Bay refinery, were down for various reasons when the contract expired. Rather than strike when the iron was hot and when businesses were most vulnerable, the USW ordered us to stay on the job.

Then, after weeks of telling us that Marathon and the other oil giants were refusing to negotiate seriously, USW President Tom Conway suddenly announced on February 25 that he had reached an agreement with “substantial gains.” for workers. But the agreement was essentially identical to the one the union had rejected on February 1. In a recent press release, Conway boasted that he signed a “responsible contract”, which “did not add to inflationary pressures”.

In fact, the agreement will impose all inflationary pressures on the backs of workers. It includes an increase of only 2.5% in the first year and an average of 3% per year over four years. With inflation at 7.9% and which is sure to rise in the coming months, this means that after four years we will have suffered a significant reduction in our standard of living. We will not be able to keep up with the rapidly rising prices of fuel, food or outrageous co-payments and other out-of-pocket medical expenses contained in this contract.

The USW’s adamant opposition to the strike must be seen in the context of the Biden administration’s increasingly dangerous military confrontation with Russia following the invasion of Ukraine. Conway announced the deal the day after the invasion and three days after the USW president took part in a virtual meeting at the White House with President Biden, Energy Secretary Jennifer Granholm and Assistant Secretary for Defense Kathleen Hicks. While the White House and the USW kept the contents of the discussion secret, there is no doubt that Biden told Conway in no uncertain terms that he needed to settle the contract and block a strike that could shut down two-thirds of the country’s refining capacity. . In other words, it’s a contract dictated by the government, which will rob us and reward the oil bosses!

No class-conscious worker would support Russia’s invasion of Ukraine. But the United States and NATO pushed Putin into a corner with NATO’s eastward expansion and massive military buildup on Russia’s borders. Despite the crocodile tears Washington’s big business politicians shed for the Ukrainian people, they are being used as pawns in the US government’s regime change operation in Russia, which aims to turn Russia into a colony of the powers American and European. The same energy giants, who are waging war on us, are licking their chops on the possibility of seizing Russia’s vast oil and gas reserves, just as they did in Iraq after the invasion of 2003, which was sold to us with lies. on “weapons of mass destruction”.

There is another major factor in this reckless war campaign: the Biden administration and the mainstream media are creating an external enemy to rally against, so working people are not fighting our real enemies, who are at home!

They tell oilmen, railway workers, dockers and others that we cannot strike because we will “disrupt the economy” and undermine “national defense”, even as the war profiteers of the industrial oil and defense laugh until the end Banque.

We are not idiots – and we are certainly not slaves. We have every right to go on an “economic strike” no matter what Conway and his well-paid regional and local henchmen say.

As we said in our founding statement, the OWRFC urges workers to reject any contract that does not include the following:

• A 40% increase and reinstatement of cost of living adjustments (COLA);

•Restoration of the day of 8 hours;

•Extension of paid leave, including six weeks of vacation during the first year of service and one month of paid paternity leave;

•The establishment of worker-run health and safety committees and the abolition of corrupt joint labour-management committees;

•Workers’ control over production rates and input on capital expenditures;

•Elevating contractors to full-time positions, with the same pay and benefits.

The USW prevented us from using our enormous strength to obtain these claims. That’s why we formed the Oil Workers Rank-and-File Committee (OWRFC). Our committee seeks to unite workers across our industry, including the tens of thousands of contract workers who are used as cheap labor. They are also our class brothers and sisters!

But we cannot fight the giant corporations and their bought and paid political parties alone. That’s why our committee will unite oil workers with striking Minneapolis teachers, BNSF and Canadian Pacific railroad workers, California, Oregon and Washington dockworkers whose contracts expire in July, and millions of other workers who struggle against the sacrifice of our lives. and livelihoods for business.

We work for global companies, which can only be defended by uniting energy workers across all national borders. American workers have more in common with workers in Russia, China, Mexico and other countries than with billionaires and corporate-controlled politicians in the United States. Only through our common struggle can we finally put an end to the pandemic, the danger of new wars for oil and other resources, and ensure that we, the workers, who create all the wealth in society , can have a future free from want , inequality and the horrors of war.