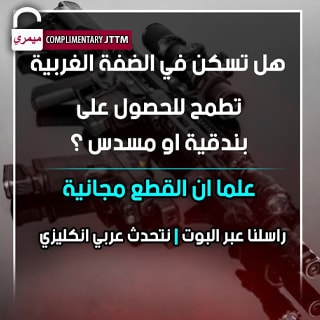 On May 7, 2022, a Telegram channel that supports Iran-backed militias issued a statement promising free weapons to West Bank residents who need them to carry out terror attacks against Israel. The statement reads: “Do you live in the West Bank and do you want a gun or a pistol? Please note that weapons [are provided] free. Contact us through the bot. We speak Arabic and English.”[1]

It should be noted that the statement does not include the bot address and that there are several known bots associated with the channel.

This statement was issued two days after the terrorist ax attack carried out by two Palestinians from the area near Jenin, against civilian passers-by in the Israeli town of Elad, in which three people were killed and four injured. This attack is the latest in a wave of terrorist attacks against Israeli citizens that began in March 2022.[2]

Since the attacks began, Iraqi militias backed by Iran have vowed they are ready to help the Palestinian people and provide them with ‘whatever is necessary’ until Israel is completely ousted from the region .[3]

The current wave of terrorist attacks has been accompanied by incitement from leaders of the Hamas organization who encourage lone wolf attacks. For example, on April 30, the leader of Hamas in Gaza, Yahya Sinwar, urged Arab residents of Israel to carry out lone wolf terror attacks. He said, “Whoever has a gun must prepare it, and whoever does not have a gun must prepare his cleaver, his ax or his knife.”[4]

[3] See MEMRI report JTTM: Iran-backed militias in Iraq: We stand ready to help the Palestinian people; Hezbollah Brigades: We consider the perpetrators of the recent attacks in Israel as our own, April 17, 2022.

[4] See MEMRITV clip Hamas leader in Gaza Yahya Sinwar: We will desecrate synagogues around the world if Al-Aqsa is desecrated; Israel Wants a Religious War – We Accept the Challenge; It Will Burn The Earth, Change The Planet; The Palestinians should carry out lone wolf attacks; Israeli Arabs should prepare their guns, cleavers, axes and knives, April 30, 2022.