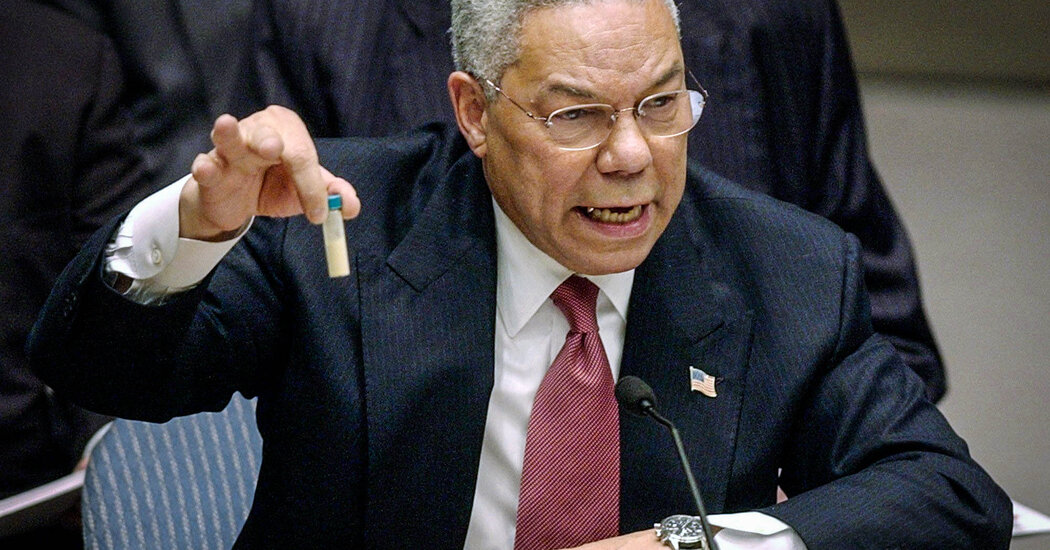 WASHINGTON – If we could unblock Colin Powell’s puzzle, maybe we could understand why America broke down.

General Powell was the best America had to offer. He was the son of Jamaican immigrants in the South Bronx who became a hero in Vietnam, and then the first African American Secretary of State.

He was smart and charismatic, with an easy laugh and a Corvette Stingray. At parties in Washington, even those where Jack Nicholson spent, people looked to Powell.

He could even speak a little Yiddish, since his teenage years as a “schlepper” in a baby furniture and toy store owned by immigrant Jews and as a Shabbos goy in the neighborhood.

He could have been president. Excitement swirled around him when he published his memoir “My American Journey” at the dawn of the ’96 race.

But like another son of immigrants, Mario Cuomo, Powell fell back to a last-minute race. It always struck me that Cuomo and Powell seemed to over-analyze if they were worthy, while WASPy’s privileged sons like George W. Bush and Dan Quayle just assumed they were worthy no matter how worthy they were. knew about it.

In 1995, I wrote a column about the rules for needlepoint pillows that Powell outlined in his memoir. It’s sad to read them now because he broke a lot of them when he drove his chariot from the cliff known as Iraq. Like rule # 7: “You can’t make someone else’s choices. You shouldn’t let someone else do yours.

But there won’t be a morning in eternity when the decision to invade Iraq will be better.

Powell did not even follow the Powell Doctrine, which avoided softened wars in which our national security interests were not at stake.

Powell’s Shakespearean tragedy is that he knew it was a rotten decision. And, unlike Bush’s White House rebels, he knew the real cost of war. He knew they weren’t playing with toy soldiers.

But Powell embodied the phrase “soldier out.”

He did not resign in protest, which could have stiffened the spines of Joe Biden, John Kerry and Hillary Clinton, who all voted to allow war out of political convenience.

He let Dick Cheney make him advocate for war at the United Nations; Cheney mocked Powell, asking him if he was afraid of jeopardizing his growing popularity, treating him like a flower child. And somehow, Powell naively thought that he and his friend George Tenet could erase all the deceptions committed by Cheney’s co-conspirators from his speech.

The demonic Cheney and the war-loving neocons in his troop – those in the Pentagon were ridiculed by Powell as a “Gestapo office” – needed a blameless leader. Once they started sucking integrity from Powell, there was no way they wouldn’t exhaust him.

The big man played himself, turning the sap of a vice president he didn’t even care about. He never trusted Cheney and Donald Rumsfeld’s unhealthy “fever” over deserting Afghanistan to go after Saddam.

Diplomats have called Iraq the “House of Broken Toys”. But in the end, it was America that was shattered.

I was amazed when Mary McGrory, the liberal lioness of the Washington Post, wrote that Powell “persuaded me and I was as difficult as France to convince.” She explained that she “clung tightly to Colin Powell’s gown” because no one commanded such respect.

Powell later admitted that it was wrong to expose Saddam’s “web of lies” as the Bush administration weaved its own web of half-truths and fantasies. But you can’t erase this slate. The consequences were too serious.

We still live in a world warped by the deception of W. and Cheney. We are still broken because W. and Condi Rice ignored this intelligence report titled “Bin Laden Determined to Strike in USA” W. was too busy mountain biking to pay attention.

Donald Trump fed – and still feeds – on these broken bonds of trust between Americans and their government. Much of the public believes in Trump’s lies and plots.

And most of those cowardly House Republicans are still so afraid of Trump’s power, as he prepares for another race, that they have refused to stand up for their own institution and look down on Steve Bannon.

Powell is a cautionary tale for another reason. He was supposed to be the “big guy in the room,” a counterweight to W.’s impertinence. It didn’t work. Powell folded and hundreds of thousands, and counting, died.

The GOP came back to the same concept with Trump and Jim Mattis, and it also failed. And it certainly wouldn’t work if Trump were re-elected. Emboldened, he would surround himself with a full squad of Mark Meadows clones.

Powell should have paid more attention to his rule # 8: “Check the little things”.

When UN officials covered a tapestry of Picasso’s anti-war masterpiece, “Guernica, ” before his speech, Powell should have checked this little thing. The disagreement of the Secretary of State selling the bombing of Iraq over the veiled image of screaming and mutilated women, men, children, bulls and horses spoke volumes.

I fear for our politicians in the era of crowd domination