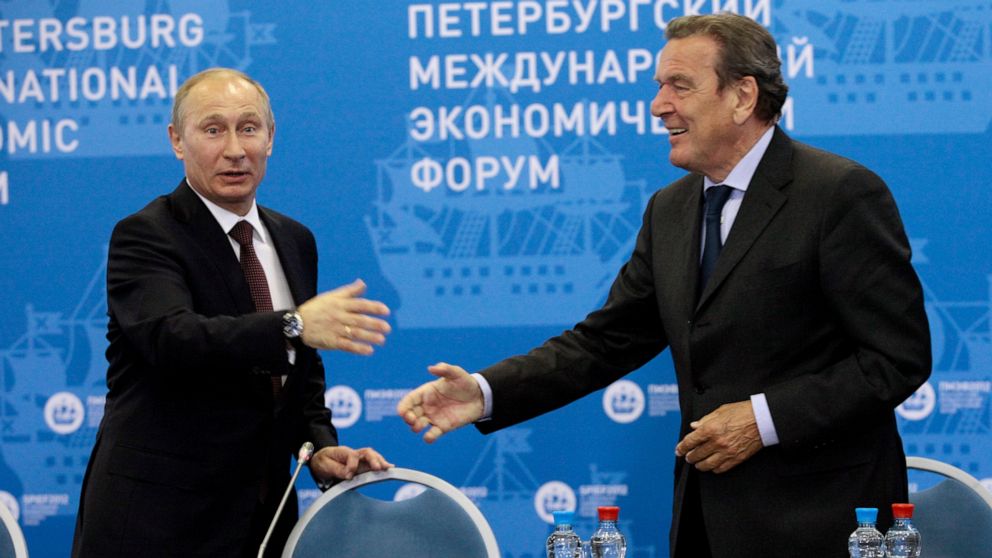 BERLIN — Gerhard Schroeder left the German chancellery after a narrow election defeat in 2005 with every chance of a future as a respected former statesman.

His ambitious overhaul of the country’s welfare state was just beginning to materialize and he had won plaudits from voters for opposing the US-led war in Iraq.

Fast forward to last week: German lawmakers agreed to shut down Schroeder’s taxpayer-funded office, the European Parliament called for him to be sanctioned, and his own party held a mid-June hearing on the deportation requests.

Schroeder’s seemingly lucrative involvement in Russia’s energy sector and his friendly relationship with President Vladimir Putin raised eyebrows for years, even as many others in Germany supported trade and energy relations.

But it was his stubbornness to stick to his energy posts and his inability to distance himself from Putin after Russia’s February 24 invasion of Ukraine that turned the 78-year-old into a political pariah. in Germany and alienated him from his party, the centre-left Social Democrats of current Chancellor Olaf Scholz.

“Gerhard Schroeder has for many years acted only as a businessman, and we should stop seeing him as a former statesman, as a former chancellor,” the co-author said last month. party leader Saskia Esken.

On Friday, Russia’s state-owned energy company Rosneft said Schroeder planned to step down from its board, which he had chaired since 2017. The move doesn’t seem likely to undo the damage done to his position; Social Democrat General Secretary Kevin Kuehnert said it was “unfortunately much too late”.

Scholz said he should quit other Russian energy jobs. The ex-chancellor for years chaired the shareholder committee of Nord Stream AG and headed the board of directors of Nord Stream 2, a second gas pipeline built to bring gas directly from Russia to Germany that Scholz’s government stopped in February.

Schroeder, who came from a poor working-class background to become Germany’s leader, served as chancellor from 1998 to 2005. He spearheaded an overhaul of the German labor market that was unpopular at the time but later been credited with making Europe’s largest economy more competitive, helping it through a series of crises.

He also vehemently opposed the US-led war in Iraq, a position that struck a chord with German voters and helped him win his second term, but chilled relations with the President George W. Bush.

Schroeder has linked up with Putin, however. He hosted the Russian leader at his home in Hanover, while the couple also made a joint appearance on a German TV talk show. When asked in 2004 if he considered Putin to be a “staunch democrat”, the Chancellor replied in the affirmative.

Weeks after leaving office, Schroeder faced criticism for his appointment to a German-Russian consortium building the Nord Stream gas pipeline under the Baltic Sea, which he had championed as chancellor. He said it was “a matter of honor” to help.

In April 2014, he was pictured hugging Putin at a party in St Petersburg to mark his 70th birthday, as tensions between Russia and the West soared over the annexation of the country. Crimea by Russia.

In early February this year, Russia’s state-owned gas company Gazprom said he had been nominated to join its board – shortly after the ex-chancellor accused Ukraine of “making noise”. It’s unclear whether the nomination, which was expected to be confirmed in June, will go ahead.

When Scholz visited Moscow shortly before the invasion of Russia, Putin praised Schroeder as an “independent expert” and “a decent person whom we respect”. He said Germans who didn’t want to pay much more for gasoline should be grateful to their former leader.

On the day of the invasion, Schroeder said it was the responsibility of the Russian government to end the war as soon as possible and that Moscow’s security interests did not justify military intervention. But he did not address his own energy posts and said in a LinkedIn post that “there are a lot of mistakes — on both sides” in Russia’s relationship with the West.

Schroeder’s stock fell again. He renounced the title of honorary citizen of Hannover, anticipating a likely decision by city officials, and had his honorary membership of the German football federation and main football club Borussia Dortmund stripped. The staff resigned in protest. Prominent social democrats have urged him to quit the party he led from 1999 to 2004; the party branch in Hanover has received 14 deportation requests, which it plans to consider on June 15.

Schroeder was defiant in an April interview with The New York Times, saying “I don’t do mea culpa.” And he was quoted as saying a massacre in Bucha, outside kyiv, “must be investigated”, but he didn’t think the orders would come from Putin.

It is unclear what ultimately prompted Schroeder to retire from Rosneft. But the announcement came a day after German lawmakers decided to strip him of his duties, while the European Parliament approved a resolution which “strongly demands” that he give up his positions in Russian companies and call on the politicians “who continue to receive Russian money” to be sanctioned. Scholz indicated that he does not support sanctions against Schroeder at this time.

“The public self-destruction of his reputation was as sad to watch as it was disturbing,” commented the Sueddeutsche Zeitung newspaper. “No one could explain how a man who was once marked by exceptional political instinct allowed the discussion to play out until his privileges were taken from him.”