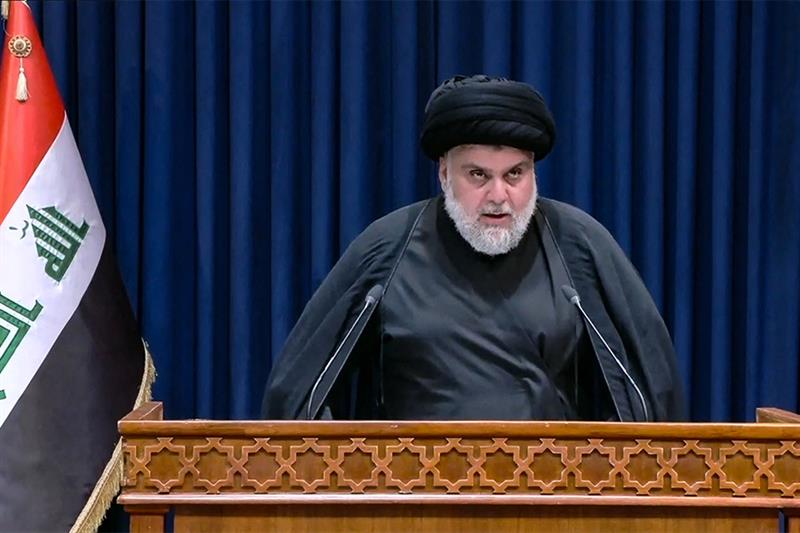 This image taken from Al-Iraqiya TV on August 3, 2022 shows Iraqi cleric Moqtada Sadr delivering a televised speech in the central Iraqi city of Najaf. – Sadr, whose bloc won the most seats in Iraqi elections last year, today demanded that parliament be dissolved and new elections be called. AFP

Nearly 10 months after the last elections, the country still has no government and no new prime minister or president after repeated factional wrangling over forming a coalition.

In the latest political turmoil to hit the oil-rich but war-scarred country, Sadr called for a “revolutionary and peaceful process and then early democratic elections after the dissolution of parliament”.

“I am sure that the majority of the population is exasperated with the ruling class as a whole, including some (politicians) belonging to my movement,” Sadr said.

His televised speech came as his supporters occupied parliament for a fifth consecutive day in protest against a nomination for prime minister by a rival Shia faction, the Iran-backed Coordination Framework.

Supporters of this rival faction have in recent days accused Sadr of attempting to launch a coup.

“From now on, there will be no old guard politicians, regardless of their affiliation,” Sadr added.

Sadr, who once led an anti-American militia and has millions of devoted supporters, noted that he also had “no interest” in negotiating with his rivals.

Around the parliament, supporters of the cleric have set up camp with tents and food stalls, and Sadr called on them on Wednesday to continue.

“Revolutionaries and protesters who participate in the sit-in must stay and continue their camp until the demands are realized,” he said.

The Coordination Framework is a grouping that includes former Prime Minister Nouri al-Maliki, a longtime enemy of Sadr, and the Hashed al-Shaabi, a former paramilitary network now integrated into the security forces.

Outgoing Prime Minister Mustafa al-Kadhemi called for a “national dialogue” with the aim of bringing all parties together to discuss, and on Wednesday he spoke with President Barham Saleh.

The two men stressed the importance of “guaranteeing security and stability” in the country, according to the Iraqi news agency.

Thousands of Coordinating Framework supporters staged counter-protests in Baghdad against the occupation of parliament.

“But we have already tried and experienced dialogue with them,” he added. “He brought nothing to us and the nation, only ruin and corruption.”

Earlier on Wednesday, the United Nations mission in Iraq called on leaders to put their country first and end the long struggle for power.

“Meaningful dialogue between all Iraqi parties is now more urgent than ever, as recent events have demonstrated the rapid risk of escalation in this tense political climate,” the UN mission warned.

“We call on all actors to engage, actively engage and agree on solutions without delay,” he added, warning that “leaders must prioritize (the) best interests national”.