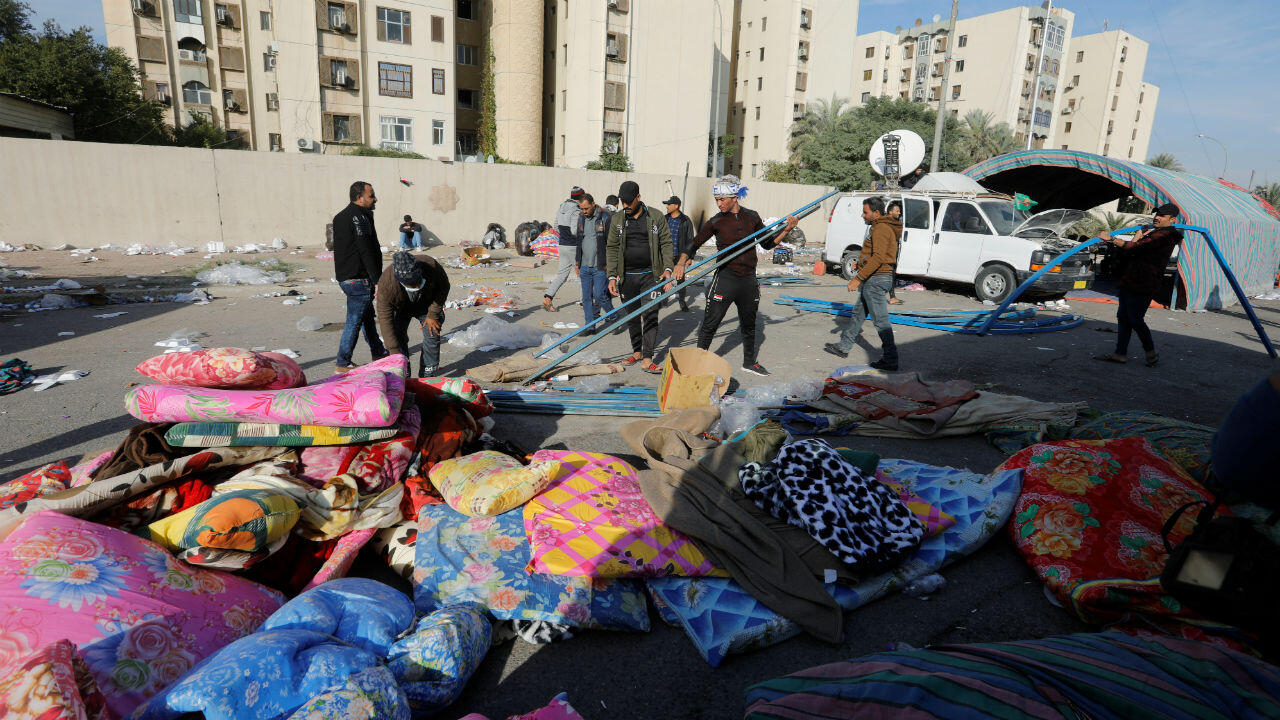 Supporters of Iran-backed Iraqi paramilitary groups who stormed the perimeter of the US embassy and threw rocks during two days of protests withdrew on Wednesday after Washington sent in additional troops and threatened retaliation against Tehran.

Protesters, angry at US airstrikes on the Iran-backed Kataib Hezbollah group that killed at least 25 people, threw rocks at the building as US forces stationed on the rooftops fired tear gas to disperse them.

But by mid-afternoon, most appeared to have heeded a call for withdrawal, issued by the Popular Mobilization Forces (PMF) coordination group made up mainly of Shiite militias, which said the protesters’ message had been understood.

Young men used palm branches to sweep the street outside the embassy compound, while others packed up materials and vans arrived to take people away. Some left to set up a protest camp in front of a nearby hotel.

The Iraqi army said all protesters had left by the evening.

Meanwhile, the US Embassy in Baghdad said on Wednesday consular services were suspended until further notice. “Due to the militia attacks on the U.S. Embassy compound, all public consular operations are suspended until further notice. All future appointments are cancelled. U.S. citizens are advised to stay away from the embassy,” read a statement posted on the embassy’s website.

US Secretary of State Mike Pompeo also canceled a planned trip to Ukraine, Belarus, Kazakhstan, Uzbekistan and Cyprus “due to the Secretary’s need to be in Washington, DC to continue monitoring the current situation in Iraq and to ensure safety and security”. Americans in the Middle East,” a State Department spokeswoman said Wednesday.

The protests mark a new twist in the shadow war between Washington and Tehran unfolding in the Middle East.

US President Donald Trump, who faces re-election in 2020, threatened on Tuesday to retaliate against Iran but later said he did not want war.

The unrest followed US airstrikes on Sunday against Kataib Hezbollah bases in retaliation for missile attacks that killed a US contractor in northern Iraq last week.

On Tuesday, crowds chanted “Death to America!”, set fires and destroyed surveillance cameras. They breached an outer perimeter of the embassy but did not enter the main compound.

The huge embassy complex, built along the banks of the Tigris in the walled ‘green zone’ of central Baghdad during US occupation after the 2003 invasion that toppled Saddam
Hussein, is the largest US diplomatic mission in the world.

While Iraqi protesters staging anti-government demonstrations in recent months have been unable to enter the Green Zone, the ease with which Shia militias and their supporters have gained access to the embassy compound has raised concerns. questions about the Iraqi government’s security capabilities.

Washington said its diplomats were safe and was sending hundreds more troops to the area.

The anti-US action comes after months of protests in Iraq against the government and the Iran-backed militias that support it. Many Iraqis complain that their country has become a battleground for a proxy war for influence between Washington and Tehran, and that their leaders are too beholden to outside powers.

The Iraqi government has long faced friction in its close relationship with the two enemies. Trump spoke to Prime Minister Adel Abdul Mahdi on Tuesday and asked Iraq to protect the embassy.

Iran’s Supreme Leader Ayatollah Ali Khamenei on Wednesday condemned the US attacks. Iran summoned a Swiss envoy, who represents US interests in Tehran, to complain about what he called “warmongering” comments from Washington.

More than 5,000 American soldiers are stationed in Iraq to support local forces. The airstrikes galvanized calls inside Iraq to expel them.

Many in the crowd outside the embassy said ending Washington’s presence in Iraq was their main goal.

“You have delivered your message”

Despite decades of enmity between Iran and the United States, Iran-backed militias and US forces found themselves on the same side during the 2014-2017 war in Iraq against fighters from the Islamic State group ( IS), the two powers helping the government retake territory from militants who had invaded a third of Iraq.

Since then, US troops have still not left, while Iranian-backed militias have been integrated into the security forces.

Prime Minister Adel Abdul Mahdi, who has announced his intention to step down in the face of anti-government protests in which more than 450 people have been killed, is backed by Iran and its allies.

The militia may have decided to withdraw from the embassy to avoid making it appear weak or to avoid clashes with government forces.

During the night, the demonstrators had pitched tents and camped outside the walls of the embassy, ​​then brought food, cooking equipment and mattresses during the morning, indicating their intention to stay before the call to the withdrawal.

But as early as Wednesday afternoon, the PMU called on its supporters to leave the embassy and gather outside the green zone out of “respect” for the state.

“You delivered your message,” he said in a statement.