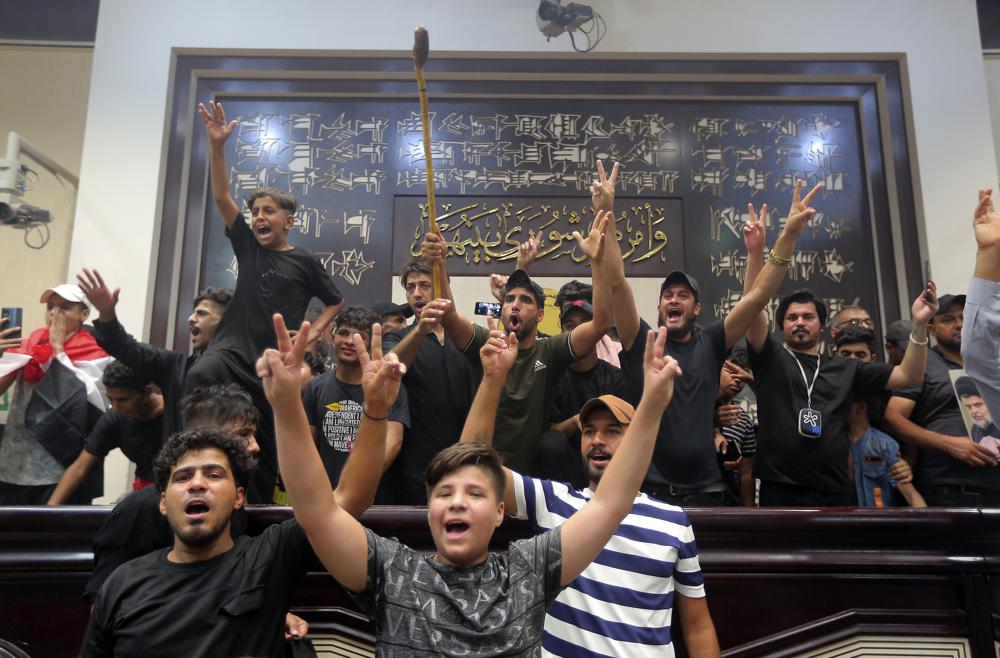 With mattresses strewn around, food trucked in and protesters playing the role of lawmakers, hundreds of supporters of an influential Shia cleric camped inside Iraq’s parliament on Sunday after toppling security walls around the building and stormed the day before.

The protesters – supporters of the cleric Muqtada al-Sadr – have pledged to stage an open-ended sit-in to derail efforts by their rivals from Iran-backed political groups to form the country’s next government. Their demands are high: early elections, constitutional amendments and the ousting of opponents of al-Sadr.

The developments have catapulted Iraqi politics into the limelight, plunging the country deeper into political crisis as a power struggle unfolds between the two main Shia groups.

Al-Sadr did not visit the scene but encouraged his loyalists, tweeting on Sunday that the sit-in was “a great opportunity to radically challenge the political system, the constitution and the elections”. He called on all Iraqis to join the “revolution”, an indication that the sit-in is likely to become an endless event.

On Sunday, the sit-in looked more like a joyous celebration than a political demonstration – al-Sadr supporters danced, prayed and chanted slogans inside parliament in praise of their leader. In the meantime, they took a siesta on mattresses lining the large halls.

It was a starkly different scene from Saturday, when protesters used ropes and chains to topple concrete walls around Baghdad‘s heavily fortified Green Zone, then stormed the assembly building. It was the second such breach last week, but this time they did not disperse peacefully.

Iraqi security forces fired tear gas and stun grenades initially in an attempt to repel protesters. The Health Ministry said around 125 people were injured in the violence – 100 protesters and 25 members of the security forces. Within hours, the police retreated, leaving parliament to the protesters.

The parliament takeover showed al-Sadr was using his broad supporters as a pressure tactic against his rivals in the coordination framework – an alliance of Iran-backed Shia parties led by former prime minister Nouri al -Maliki – after his party was unable to form a government despite winning the most seats in last October’s federal election.

Neither side appears willing to concede, and al-Sadr appears determined to derail efforts to form a government by Iran-backed groups.

But there were red lines – the road leading to the nearby judicial council building was closed, with a heavy security presence around it. Breaking the building would amount to a coup, and al-Sadr had ordered his followers to stay away.

Protesters seemed prepared for the long haul – or at least an extended sit-in.

Tuk-tuks, a mainstay of transportation in Baghdad’s poor suburb of Sadr City, from where the cleric draws much of his supporters, ferried protesters to and from the parliament for a fee of 1,000 Iraqi dinars , or 60 cents.

Coolers were installed and water bottles were distributed. A child was handing out candy while teenagers were selling juice in bags. A few women – a minority in the predominantly male protest – swept the floors.

Outside, rubbish from food parcels and other rubbish littered the street leading to the gates of Parliament as trucks brought in giant cauldrons of steaming rice and beans to feed protesters. Nearby signs read: “Revolution Restaurant”

A young man, Samir Aziz Abbas was selling popsicles. “I’m here to make a living,” he said, wiping the sweat from his brow.

One protester, Haidar Jameel, assumed the seat of parliament speaker Mohammed Halbousi – among Iraq’s most powerful political figures – and from there watched his rambunctious comrades. After al-Sadr supporters took control of parliament, Halbousi suspended future sessions until further notice.

“We won’t back down until our demands are met,” Jameel said.

Al-Sadr’s support base consists largely of poor Iraqis living in the slums of Baghdad, drawn by calls against corruption. But al-Sadr is also an establishment figure, with numerous officials appointed by his party across the state apparatus.

By choosing to stage his protest ahead of the Shia Islam holy day of Ashura, al-Sadr took advantage of a time of high religious fervor – protesters performed religious rituals inside parliament . At noon, an imam led a prayer in the central hall.

Ashura commemorates the murder of the Prophet Muhammad’s grandson, Imam Hussein. Iraqis typically march in their thousands to commemorate the day in the holy city of Karbala and emotions run high in the days leading up to it.

According to Shia religious belief, one way to show love towards Imam Hussein is to speak out against oppression.

Al-Sadr’s messages to his followers are steeped in references to pilgrimage, said Marsin Alshamary, a postdoctoral fellow at the Brookings Institution.

For protesters, mostly young men, the sit-in offers a chance to get closer to the seat of power in a system that has long neglected them. Before, they could not have entered the heavily fortified area without permission.

When Meethak Muhi took his turn to sit in the seat of deputy speaker of parliament, he tied himself to the chair with a scarf.

“Parliament is over,” he shouted.

POLITICS: Infographic on the chaos of the Iraqi government