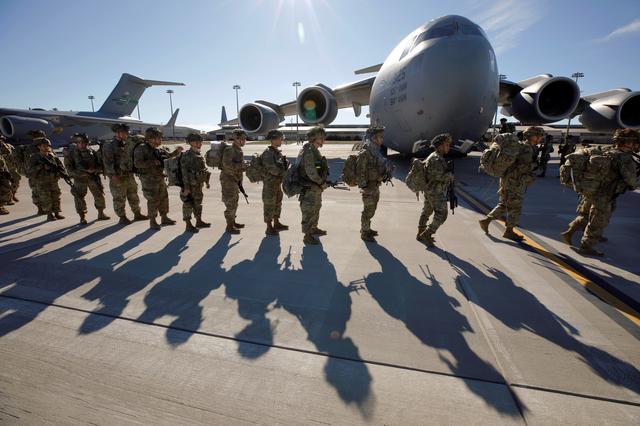 BAGHDAD (Reuters) – Supporters of Iranian-backed Iraqi paramilitary groups who stormed the US embassy perimeter and threw stones in two days of protests withdrew on Wednesday after Washington sent in additional troops and threatened with reprisals against Tehran.

Protesters, angry at US airstrikes against the Tehran-backed Kataib Hezbollah group in which at least 25 people were killed, threw stones at the building as US forces stationed on the rooftops fired tear gas to disperse them.

By mid-afternoon, most appeared to have heeded a call to withdraw from the Popular Mobilization Forces (FMP) coordination group made up mostly of Shiite militias, which said the protesters’ message had been heard.

The protests marked another turning point in the shadow war between Washington and Tehran unfolding in the Middle East.

US President Donald Trump, who faces a 2020 re-election campaign, threatened on Tuesday to retaliate against Iran but later said he did not want a war.

On Tuesday, the crowd chanted, â€œDeath to America! Â», Lit fires and smashed surveillance cameras. They pierced an outer perimeter of the embassy but did not enter the main compound.

LARGEST EMBASSY IN THE UNITED STATES

The huge embassy, â€‹â€‹built along the banks of the Tigris in the walled “green zone” of central Baghdad during the US occupation following the 2003 invasion that overthrew Saddam Hussein, is the largest US diplomatic mission in the world.

The State Department said on Wednesday that Secretary of State Mike Pompeo has decided to postpone his upcoming trip to Ukraine, Belarus, Kazakhstan, Uzbekistan and Cyprus to stay in Washington and monitor the situation in Iraq.