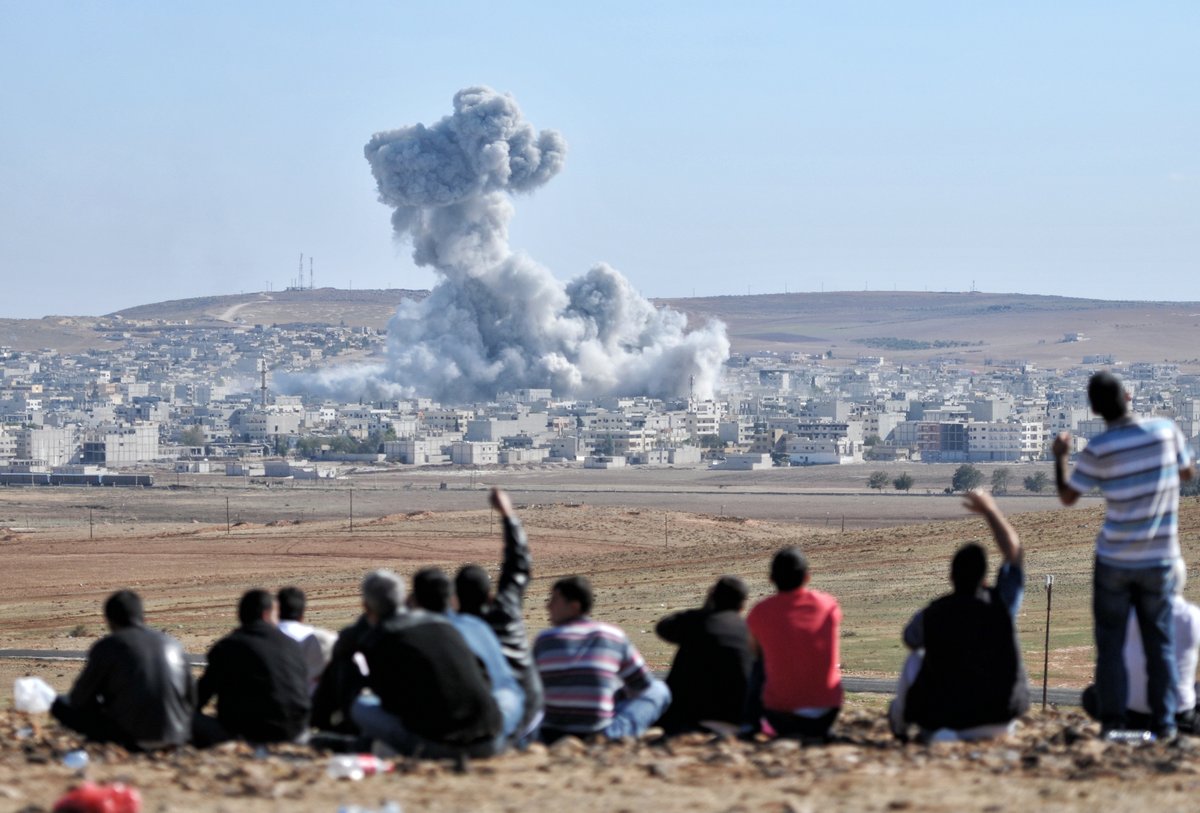 In August 2019, thousands of refugees, prisoners and families of ISIS fighters gathered in an encampment in the border town of Baghuz, in eastern Syria, one of the last territories controlled by the so-called Islamic State. The United States, supported on the ground by an allied Kurdish and Arab militia, launched a massive air assault on the enclave.

As The New York Times reported on November 13, 2021, an American attack aircraft dropped its payload on the civilian encampment. “As the smoke cleared,” the article notes, “a few people stumbled away in search of shelter. Then a jet stalking them dropped a 2,000 pound bomb, then another, killing most of the survivors. ”At least 70 civilians died.

The death toll has been minimized and reports have been delayed, cleaned up and filed.

A Pentagon lawyer has reported internally that this is a possible war crime, but, “at almost every step, the military took action that covered up the catastrophic strike,” according to the Times. The death toll has been minimized and reports have been delayed, cleaned up and filed.

US-led coalition forces razed the site of the bulldozer blast. The Defense Ministry’s independent inspector general’s office launched an investigation, but the report was effectively censored. An assessor at that office lost his job when he complained about the cover-up.

In response to a request earlier this month from Times, the US Central Command acknowledged the strikes for the first time and admitted that 80 people were killed. Nonetheless, he insisted that the airstrikes were justified and that “no formal war crime notification, criminal investigation or disciplinary action was warranted.”

The Baghuz massacre was one of the last of 35,000 airstrikes launched by the United States over a five-year period in Syria and Iraq that pointedly targeted ISIS. Under Pentagon rules, US forces could call for air strikes without checking for threats to civilians, as long as it was deemed necessary for self-defense.

What constitutes “self-defense” for the Pentagon, however, is not just when its forces are under fire. Lethal force clearance may also be granted if enemy troops are simply suspected of displaying “hostile intent,” which the Pentagon has defined so broadly in the case of US-backed ground operations in. Syria that they made up 80% of all US airstrikes. .

The New York Times The article also noted that the Pentagon has failed to follow up on numerous reports of civilian casualties and generally failed to complete investigations. In the rare cases where an investigation was ordered, it was subsequently canceled. An email shared with the Senate Armed Services Committee revealed that the only time an investigation was allowed to proceed was when there was “potential for high media attention, [or] worry over outcry from the community / local government, worry that sensitive images might come out. “

So far, the Democratic-led Senate Armed Services Committee has refused to open an investigation into the Baghuz attack or any other possible war crimes committed by US forces in the war against ISIS.

New technologies have made bombing much more precise than during WWII, the Korean War or the Vietnam War. During these wars, the United States regularly engaged in carpet bombing of large urban areas, at the cost of hundreds of thousands of civilians. However, since the launch of the “war on terror”, the two main political parties have gone to great lengths to justify the killing of civilians in the name of the fight against terrorism.

For example, Congress passed a series of resolutions defending Israel’s attacks on civilian areas in the Gaza Strip, the West Bank, and Lebanon, which attempted to exonerate the U.S.-backed Israeli armed forces for thousands of civilian casualties.

Often these resolutions have defended Israeli attacks on civilians by claiming that Arab militias are using “human shields”. This is despite the fact that, although the use of civilians against their will to deter attacks on an adversary’s troops or military equipment is considered a war crime, it does not authorize bombing any more than it does. criminal holding hostages does not give the police the right to shoot the mall.

When investigations by Human Rights Watch, Amnesty International, the United Nations Human Rights Council, the US Army War College and others failed to find a single documented case of civilian deaths caused by Hamas or Hezbollah using human shields while fighting Israeli forces, Congress decided to redefine it.

A 2009 resolution, drafted by Democratic House leader Nancy Pelosi and passed by an overwhelming bipartisan majority, broadened the definition of the use of human shields to include any member of a designated “terrorist group” within it. a civilian population. By this definition, a Hamas official living in a high-rise building in Gaza would make the entire structure a legitimate military target. In other words, when it is enough to be near a “terrorist” to qualify a civilian as a human shield, an entire city can become a free fire zone.

Years earlier, I had predicted that this type of defense against Israeli war crimes would likely be used as a justification for “massive US airstrikes on Mosul, Raqqa and other cities controlled by the Islamic State. , regardless of the civilian casualties ”.

And that’s what happened. There was virtually no expression of concern in Congress when, in 2017, the United States launched heavy attacks on Syrian and Iraqi cities held by ISIS (which really used civilians as human shields ).

An Amnesty International investigation found that 1,600 civilians died in the US-led bombing campaign in Raqqa, largely destroying the Syrian city. The accuracy of the report, which has been called “the most comprehensive investigation into civilian deaths in a modern conflict”, has not been disputed, but it has been largely ignored in the US mainstream media.

It shouldn’t be surprising that the Pentagon thought it might get away with the 2019 Baghuz massacre.

There was little more coverage from the US-led bombing of Mosul earlier that year, when US planes hit thousands of targets, turning much of this ancient city into rubble. and causing the death of at least 3,000 civilians. A 2019 Human Rights Watch investigation determined that approximately 7,000 civilians had been killed over the past five years in Iraq and Syria in airstrikes by the United States and its allies.

With virtually no backlash in Washington, DC, or mainstream media coverage, it shouldn’t be surprising that the Pentagon thought it could get away with the 2019 Baghuz massacre. There seems to be a feeling that, given the horror of ISIS, the killing of large numbers of civilians may be necessary to ensure their defeat, so it is important to keep such tragedies silent.

The problem, however, goes far beyond Daesh. Even when it comes to another extremist militia (and even if an American attack on civilians makes headlines), the U.S. government has little reason to worry. For example, after belatedly admitting that a drone missile attack in Kabul last August targeted a car driven by an Afghan aid worker, killing him and nine others, including seven children, the Pentagon insisted that ‘there had been no misconduct or negligence.

The implication is that there would therefore be no change in procedures or personnel, and that the Pentagon would take no action to prevent such tragedies from happening again.

Meanwhile, the Biden administration continues to provide weapons, training and maintenance to Saudi and Emirati forces that killed tens of thousands of civilians in airstrikes in Yemen. A bipartisan majority in Congress reiterated that the billions of dollars in taxpayer-funded military aid to Israel remain “unconditional” despite the hundreds of civilians killed in last spring’s bombing of overcrowded urban neighborhoods in Gaza, again under the pretext of self-defense against terrorists.

Perhaps it is finally time to ask what exactly constitutes terrorism.