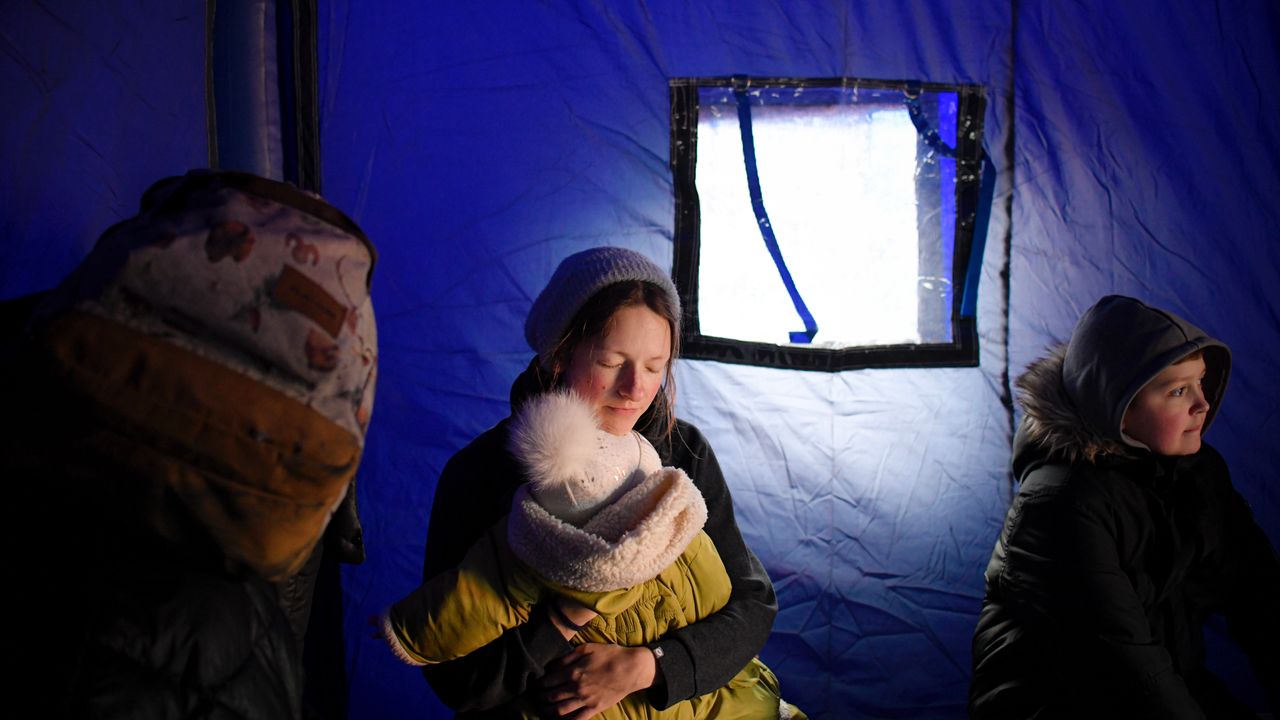 Six million people have now fled Ukraine, according to recent data from the United Nations Commission on Human Rights. Another 7.7 million people are internally displaced. Collectively, this represents approximately 31% of the country’s population.

While Western media have sought to portray the situation as if the women, children and elderly men coming out of Ukraine are walking in the loving arms of the US and European governments, all the social and political problems of global capitalism in a state of decadence – poverty, inequality, a collapsing healthcare system, low wages, human trafficking, anti-immigrant chauvinism and racism, borders that cannot be crossed without visas – manifest themselves in the refugee crisis.

The United States, which has just approved a $40 billion package for Ukraine, mainly devoted to turning the country into a killing field, will only admit 100,000 refugees. The United for Ukraine program, which has received 19,000 applications so far, has only granted visas to 6,000. Participants must complete background checks, biometric scans and, most importantly again, demonstrate that they have private sponsors in the United States who have the financial means to support them.

Before the start of “United for Ukraine”, 20,000 refugees from the country were crowding along the southern border of the United States. While most have been dispersed, going to Mexico City or returning to Europe, some are still housed in temporary shelters run by volunteers. Washington insists that no Ukrainian will be admitted to the country or granted legal status unless they have completed the visa process outside of US soil.

In the UK, a Home Office official told reporters on Wednesday that Ukrainians traveling to the country without papers would be deported, possibly to war-torn Rwanda, to which African migrants are now sent. Any Ukrainian entering Britain by transiting from Ireland to Northern Ireland and then to the UK mainland will be treated as an illegal immigrant. The government official did not say whether those crossing the English Channel from France would also be included in this category.

News continues to come out about problems with Britain’s “Homes for Ukraine” scheme. Migrants, mostly women and children, have been placed in households for which there has been no criminal background check, even though this step is supposed to be compulsory. Currently, efforts are underway to remove 600 Ukrainian families from places that have since been deemed unsafe. Advocates fear that the vulnerable population could fall prey to human traffickers.

In addition, Britain’s badly underfunded National Health Service (NHS), although in principle accessible to Ukrainians allowed to enter, cannot meet the needs of the population. Refugee advocates note that migrants, especially children, are in dire need of mental health services. They face a two-year wait to receive it.

Canada, home to 10 million Ukrainians and a breeding ground for far-right Ukrainian nationalism, has been criticized for providing no means of travel to the North American country for those on temporary three-year visas in the framework of the Canada-Ukraine emergency. Travel Authorization Program.

In response, Ottawa announced that it would send three charter planes in late May and early June to transport just 900 refugees. They can get seats on planes on a “first come, first served” basis. Once in Canada, “free accommodation will be offered to Ukrainians who do not have a suitable place to stay for up to 14 days,” an official told the Canadian Broadcasting Corporation. What people in Europe’s poorest countries are expected to do with themselves after those two weeks is unclear.

Germany, which has said it will not set an upper limit on the number of Ukrainian refugees it will take in, is, according to the major US newspaper Foreign Policedriving Afghans, who were seeking refuge from the Taliban, out of their apartments to make way for new arrivals from Ukraine.

Report on the situation of an Afghan household, Foreign Police wrote: “Amiri and her family have already been moved twice since their eviction in March and now live in a former hotel on the northern outskirts of Berlin in Reinickendorf, advertised as a temporary shelter for the ‘homeless’; it’s the family’s third home in a month.

Germany also denies visa-free admission to Ukrainians who do not have a biometric Ukrainian passport. They are stuck in Poland, which is the main destination for those fleeing the Russian-Ukrainian/NATO war. There were 3,200,000 people who passed through its territory. How many are staying or moving – or at least trying to do so – is unclear as the responsibility for managing this population has been largely devolved to city and local governments who are struggling to get the situation under control.

He said the federal government, while allowing Ukrainians to cross the border, provided little logistical support. Funding for many efforts comes from municipal budgets, but volunteers are often the ones stepping in to do the work on the ground, and the money allocated is not enough.

A Polish volunteer said The New Republic in mid-April, “At first the laundromats washed the sheets we needed for free; the caterers would not charge for the food. It’s starting to end,” but, he added, “people keep coming.” The situation is particularly unsustainable because the ability of citizens to provide things like housing by opening their homes to families in need cannot continue for months, let alone years.

The Polish capital has seen its population increase by more than 15% in two and a half months, with 300,000 Ukrainians now living in the city and representing one in five inhabitants. Rents, reports The New Republic, “increased by 15% in the first two weeks of the war – in Kraków 26% and in Wrocław 33%”. Inflation, which stood at 12.3% in April, is now the highest since 1998.

Warsaw, which now has 120,000 Ukrainian children to educate, hires refugee teachers to educate them for $40 a day for six hours of work, or just over $6.50 an hour. That’s not even enough to cover the average rent for a one-bedroom apartment. Additionally, many refugee households do not have dual incomes, as working-age men are not allowed to leave Ukraine.

After the Polish banking system began to go into crisis in March because it was unable to handle the volume of almost worthless Ukrainian currency that the refugees were trying to exchange for Polish zloty, a policy was instituted according to which migrants are guaranteed to be able to exchange 300 euros worth of hryvnia for three months. What happens after this moment is unknown.

Other countries are also caving in under the weight of the refugee crisis. The small country of Moldova, which is home to 3 million people and is, along with Ukraine, one of the poorest countries in Europe, has seen 430,000 refugees transit through its territory, of whom 95,000 have remained. With anemic economic growth, 22% inflation, soaring natural gas prices and the lasting effects of the COVID-19 pandemic, it simply cannot support this population.

Remittances from Moldovans working abroad, which amounted to $1.5 billion in 2020, or 10% of the country’s GDP, have also collapsed. The International Monetary Fund has even called on foreign powers to simply give money to Moldova, so that the country, of geostrategic importance in the conflict with Russia, does not implode.

In March, the EU decided to grant Ukrainian refugees a “temporary protected status” (TPS), which allows them to live in member states, as well as potentially receive social benefits and possibly work on a legal. It was portrayed by Brussels as a great humanitarian act. Indeed, that’s more than desperate migrants from the Middle East and Africa – drowned in the Mediterranean, locked in detention centers, water-cannoned at the border, abused by police and expelled – have received.

However, the length of stay allowed under TPS varies from country to country, ranging from as little as 90 days to a year. Sometimes, but not always, this comes with the possibility of renewal. In the meantime, refugees have to apply for longer-term work permits or permanent asylum through official channels completely overloaded with endless waits and bureaucratic hurdles. Many will be refused and sent back to Ukraine, whether it is safe or not.

Furthermore, it is clear that some within the EU widely view Ukrainian refugees as a profitable and poorly paid workforce. “We can already see how many Ukrainians are working legally in Poland, often in jobs that Poles don’t want, so it’s obvious that the help is mutual,” Polish Prime Minister Mateusz Morawiecki said recently. The jobs Poles “don’t want” are those with substandard wages and working conditions.

In addition, TPS status is denied to those who cannot prove Ukrainian citizenship, such as Africans who were studying in Ukraine when the war broke out and refugees from the Middle East who used Eastern Europe as a base. transit. Roma with dual nationality are also denied entry into the EU. The Czech Republic, for example, has just instituted new rules for refugees to present proof of identity for the express purpose of preventing them from entering.

When reported in the press, these facts are frequently attributed to racism. This plays a part, with EU states long promoting the most disgusting forms of anti-Arab, anti-African and anti-Roma prejudice and discrimination.

But the central question is not the skin color or the origin of the refugees. It is the fact that Ukrainians are fleeing a war allegedly created in its entirety by dictator Vladimir Putin and his hatred of “freedom” and “democracy”. Ukrainian refugees, pawns in the quest for domination of America and Europe, are thus easily used in anti-Russian propaganda which prepares the ground for the United States and NATO to launch a direct war against Moscow. . Thus, they currently enjoy relatively benevolent treatment in the media and some government assistance.

Refugees from Iraq, Afghanistan, Libya, Syria and elsewhere, however, are trying to leave areas that are clearly and directly the product of the total destruction of these regions by the United States and its allies. And those fleeing Africa are trying to escape the violence and desperate poverty that are the products of colonial and neo-colonial rape of the continent. Aside from their usefulness in stoking anti-immigrant chauvinism in an effort to divert social anger to the right, for Washington and Brussels, these refugees are largely human waste.

As the crisis triggered by the war deepens, Ukrainian refugees, like their country, will also be brutalized.