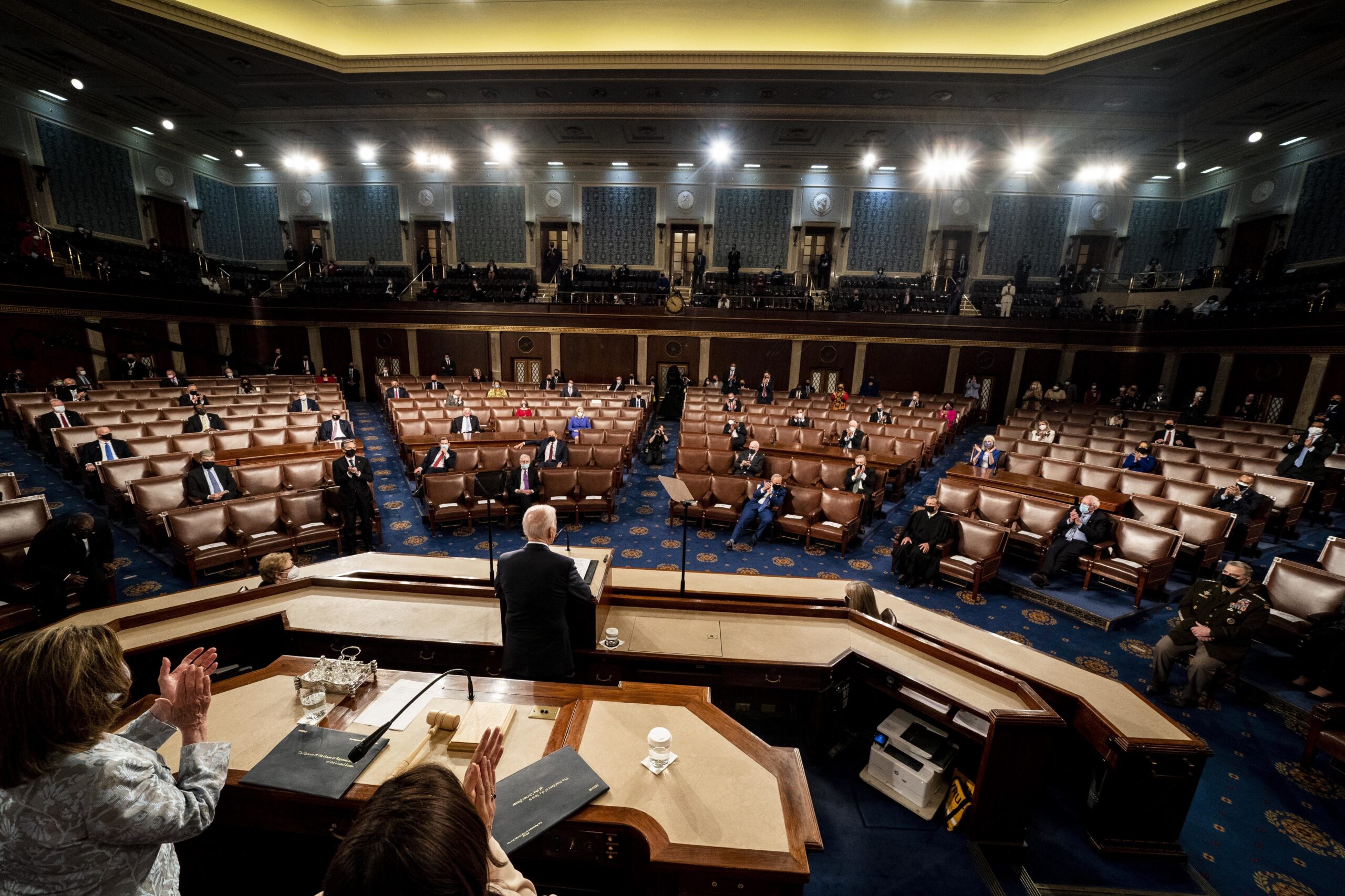 No moment in America’s annual political calendar is as grand or as daunting as the State of the Union address, a speech the president typically delivers in a joint session of Congress early in the year.

This year, President Biden is due to deliver his first State of the Union address on Tuesday. The Constitution requires the president to report on the “state of the union” and to do so “from time to time.” It has been customary for more than a century for the president to do so with a live address before a joint session of Congress. Almost all Cabinet and Supreme Court members also attend.

From time to time, the timing set by tradition has coincided with a time of high stress for the nation — and especially for the president himself. And when things are particularly tense, the tension and drama in the Capitol bedroom can be almost palpable.

But even under maximum pressure, the presidents viewed the speech as a unique opportunity to make their case to the rest of the government, the nation as a whole and the rest of the world.

On Tuesday, Biden is expected to use this unique opportunity to elaborate on the US response to the Russian invasion of Ukraine, the most severe blow to the security of Europe and the NATO alliance in 77 years. since World War II.

As Americans grapple with a two-year-old pandemic and economic strains of their own, the return of war in Europe adds a dire omen to events not seen in many years.

The last time war clouds were so dark above a State of the Union address was in January 2003, when President George W. Bush took the opportunity to advocate for the invasion of Iraq. This invasion would take place less than two months later, overthrowing strongman dictator Saddam Hussein. Bush maintained that the Iraqi regime was seeking a nuclear weapon and had developed other “weapons of mass destruction”. He said that meant the United States must use all available means, including invasion, to neutralize this threat.

In a sense, Bush was preaching to the choir. Congress had already adhered to this analysis in the fall of 2002, by approving an authorization for the use of military force (AUMF) against Iraq. Some Democratic senators who supported this AUMF later regretted and disavowed this vote.

But at the time, the memory of the terrorist attacks of September 11, 2001 was still fresh and Bush’s “war on terror” was still widely popular. His approval score in the Gallup poll had declined from its peak of 90%, but was still historically high.

Bush also devoted his 2002 State of the Union largely to his analysis of the “axis of evil”, identifying Iran, North Korea and Iraq as “outlaw regimes that research and possess nuclear, chemical and biological weapons”.

However, the details of Bush’s appeal in the 2003 speech would come back to haunt him. He relied heavily on an allegation that Iraq “has recently searched for significant amounts of uranium in Africa.”

This particular part of intelligence, among others, was later discredited. But by then the United States had invaded and occupied Iraq, overthrowing Saddam Hussein but finding no weapons of mass destruction or evidence of their imminent development.

War and the State of the Union

War had also loomed over President Bill Clinton’s State of the Union in 1999, when war broke out in the Balkans over the Serbian province of Kosovo. Clinton described the ongoing “ethnic cleansing” in Kosovo, displacing more than a million Muslim residents there, as a form of genocide. US planes would be part of a NATO effort to punish Serbia and force a settlement.

During the decades of the Cold War, presidential State of the Union addresses regularly referred to the need to maintain military force (both nuclear and conventional) to deter ambitions of “world communism”. In the 1960s and early 1970s, this recurring element of speech carried a specific message about the Vietnam War. During those years, presidents combined an assertion of the importance of war to national security with vague promises to end it.

Lyndon Johnson, who ordered the greatest escalation of the war in 1965, focused his 1966 State of the Union address on defending that decision. Indeed, he acknowledged how the war had eclipsed all other events of the previous year, including the enactment of the Voting Rights Act, Medicare and Medicaid and a host of other “big society” programs. which he first presented in his previous State of the Union address a year earlier.

impeachment in the air

Three presidents over the past 50 years have come to Capitol Hill to deliver a State of the Union with impeachment hanging over them. Two – Bill Clinton in 1998 and Donald Trump in 2020 – addressed the very members of the House who, weeks earlier, had voted to impeach them. These presidents were also addressing the same members of the Senate who were already weighing their votes to convict or acquit.

Yet neither Clinton in 1998 nor Trump in 2020 mentioned any of these facts in their State of the Union addresses. Both addressed the joint session with evident confidence that the Senate would not muster the two-thirds vote needed to remove them. This turned out to be true both times.

But Trump’s speech also offered the spectacle of House Speaker Nancy Pelosi standing behind him and angrily shredding the text of his speech after it concluded. Trump appears to have refused to shake his hand when he came to the stage.

A slightly different approach was taken by President Richard Nixon in January 1974, when he delivered the second State of the Union of his second term. Nixon did not dwell on the scandal and the multifrontal investigation which had already caused several people around him to resign. But he addressed the issue by telling Congress “one year of Watergate is enough.” This plea fell on deaf ears.

“Watergate” was a catch-all term for the ongoing investigation into various illegal acts of Nixon’s 1972 re-election campaign and subsequent White House efforts to cover up those crimes. The Senate’s “Watergate Committee” had already held weeks of televised hearings into the widening scandal, and Nixon was actively resisting subpoenas for the tape recordings of his Oval Office meetings.

In the months that followed, impeachment hearings proceeded in the House, the Supreme Court ordered the tapes released, and Nixon resigned in August 1974.

There have also been times when a president addressed a Congress that had been substantially reconstituted in the previous November elections. In 2011, for example, President Barack Obama faced a Congress with many new faces. There were 95 new members in the House, including 85 Republicans (three-quarters of whom had replaced Democrats in their constituencies). There were 13 new senators, all but one Republican, and half of them had taken seats from the Democrats.

Something similar had happened to Bush just four years earlier, when in 2007 he found himself facing Democratic majorities in the House and Senate after his own party had controlled both since 2003.

Clinton had faced a reversal that was arguably even more dramatic when he came to deliver his 1995 State of the Union. The comfortable majorities he had in both houses during his first two years in office were buried. in the Republican landslide of November 1994.

Clinton envisioned the first Republican-majority House in 40 years, led by an aggressive new president named Newt Gingrich, seated in a chair behind the president. The newly Republican Senate leader in 1995 was Bob Dole, who would go on to be the GOP nominee against Clinton the following year.

In that election, Republicans won a majority of House and Senate seats (and gubernatorial positions) in the South for the first time since Reconstruction. Since then, Republicans have maintained this advantage in the region.

It will be widely noted that next week’s State of the Union will be the first in US history where women hold both constitutional offices that allow them to sit behind the President. As vice president, Kamala Harris is also the official president of the Senate, so she will be seated next to Pelosi, who first welcomed a president to the chamber in that role in 2007.

(Both women were in office and in place when Biden spoke at a joint session in April 2021, but this was more of an introduction and in any case not an official report on the state of the Union.)

Over the years, there have been many dramatic and even pivotal moments associated with the State of the Union report. In 1862, as the Civil War neared the end of its second year, Abraham Lincoln told Congress:

“The fiery trial we are going through will light us up in honor or dishonor for the [last] generation… By giving freedom to the slave, we secure freedom to the free – an honorable fellow in what we give and what we preserve. We will nobly save or wickedly lose the last best hope on earth.

But this report was not heard by anyone when it was delivered because it was a written document and not a speech, as was the custom at the time.

George Washington delivered his reports in speech form, but in the 19th century the dominant format became a written document. Woodrow Wilson broke that pattern with his first State of the Union in 1913, near the end of his first year in office. He continued his tradition in person until a stroke made it impossible in 1919. Since then, each president has delivered the speech live in a joint session.

Radio began broadcasting the speeches live with President Calvin Coolidge in 1923 and they have been televised since President Harry Truman in 1947. Johnson’s 1965 speech was the first to be televised in prime time.