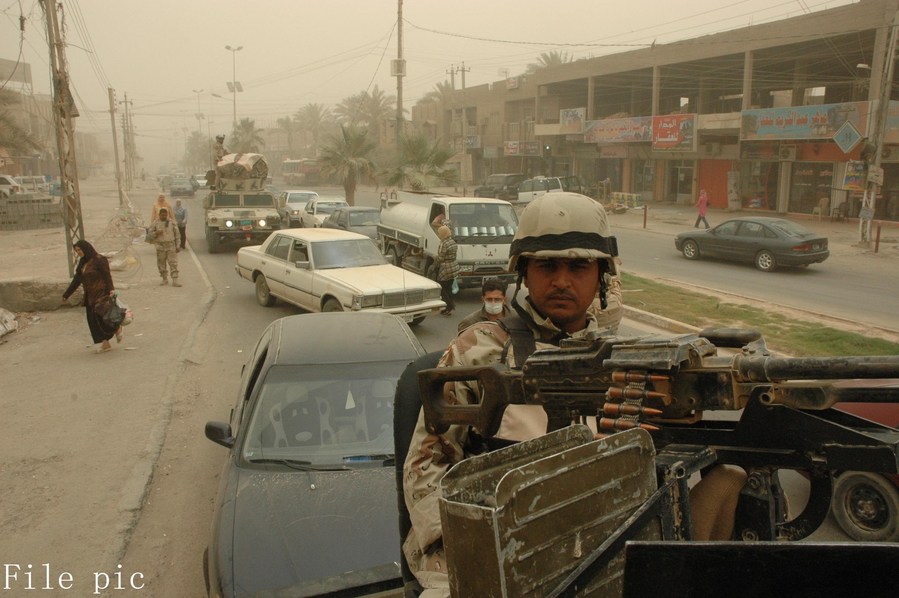 “This is the seventh military site that has been handed over from the international coalition to Iraqi forces,” an Iraqi official said.

BAGHDAD, July 25 (Xinhua) — U.S.-led international coalition forces tasked with fighting the Islamic State (IS) militant group on Saturday handed over to Iraqi security forces a new military base in Basmaya near the Iraqi capital Baghdad, the official news agency and coalition statement said.

“The handover of the base of the Spanish forces, which is part of the international coalition, in the Basmaya camp to the Iraqi forces took place according to a timetable agreed between the Iraqi government and the command of the coalition”, quoted the Iraqi news agency Tahsin al. -Khafaji, spokesman for the Iraqi Joint Operations Command (JOC), as said.

“This is the seventh military site that has been handed over from the international coalition to Iraqi forces,” al-Khafaji said.

“The Spanish forces present at the site had trained the Iraqi security forces and will leave Iraq after completing their mission,” he said.

Meanwhile, a coalition statement said a ceremony was held at Basmaya camp, southeast of Baghdad, to mark the handover of the military site to Iraqi forces.

“Due to the success of the Iraqi security forces in the campaign against Daesh (IS group), the coalition is adjusting its positioning and orientation in Iraq. These military movements have been planned for a long time in coordination with the Iraqi government,” the statement said.

The statement also said the coalition “will continue to move and consolidate personnel and equipment from Iraqi bases throughout 2020, in cooperation with the Iraqi government.”

The handover ceremony took place a day after four Katyusha rockets landed on the Basmaya military base without causing any human casualties.

Spanish forces are part of a US-led international coalition tasked with assisting Iraqi security forces in the fight against IS militants by carrying out airstrikes against IS in Iraq and Syria and providing military equipment and training to Iraqi forces.

Relations between Baghdad and Washington have been strained since January 3 after a US drone hit a convoy at Baghdad airport, killing Qassem Soleimani, former commander of the Revolutionary Guard Corps’ Al-Quds Force. of Iran, and Abu Mahdi al-Muhandis, deputy head of the Iraqi paramilitary forces Hashd Shaabi.

The tension prompted the two sides to hold a series of strategic dialogues on June 12, during which the United States confirmed that it was not seeking a permanent military presence in the country and that over the next few months the United States would continue to reduce Iraqi forces and discuss with the Iraqi government the status of the remaining forces.

More than 5,000 US troops have been deployed to Iraq to support Iraqi forces in the battles against ISIS, primarily for training and advisory purposes.

The troops were part of the US-led international coalition which also carried out airstrikes against IS targets in Iraq and Syria.