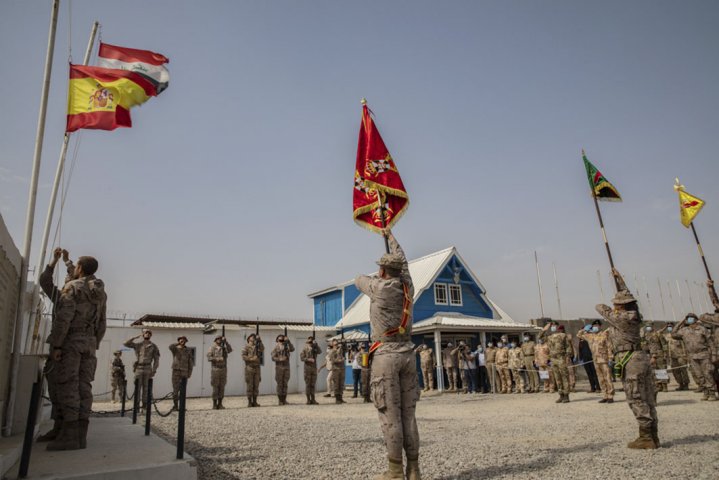 The Iraqi security forces (ISF) have improved in the last quarter despite the end of most of the formation of the US-led coalition, according to the latest report from the Office of the Inspector General of the United States. United (OIG).

Spanish soldiers serving with the coalition lower their flag at the Besmayah Range Complex as they hand the facility over to the Iraqi military on July 25. CJTF-OIR attributed this base transfer and others this year to the success of Iraqi forces against Islamic State. (Combined Joint Task Force – Operation Inherent Resolve)

Released on August 4, the report cited the United States-led Combined Joint Task Force – Operation Inherent Resolve (CJTF-OIR) as saying that the Counter-Terrorism Service (CTS) and the Iraqi Army Aviation Command were “continuing improve their capabilities, allowing them to conduct operations against Daesh [the Islamic State] with less need for coalition support â€.

CJTF-OIR said the ongoing large-scale, multi-phased counterinsurgency operation “Heroes of Iraq” against the Islamic State “has shown that the ISF continues to improve its ability to deny the ground. of ISIS “even if it had only limited airs of the coalition. Support.

This appears to represent a significant turnaround from CJTF-OIR’s impressions of the opening phase of â€œHeroes of Iraqâ€. The OIG’s previous quarterly report released in May cited the coalition as saying the failure to clean up many targeted areas “may have demonstrated the ISF’s lack of resolve or capacity.”

He said most elite CTS units “were limited in their ability to coordinate the maneuvers of multiple subordinate elements in complex operations.” While the Iraqis have carried out some intelligence, surveillance and reconnaissance (ISR) missions, they did not use their Scan Eagle or CH-4 unmanned aircraft for unspecified reasons.

The Iraqi Security Forces (ISF) improved in the last quarter despite the end of the US-led coalition.