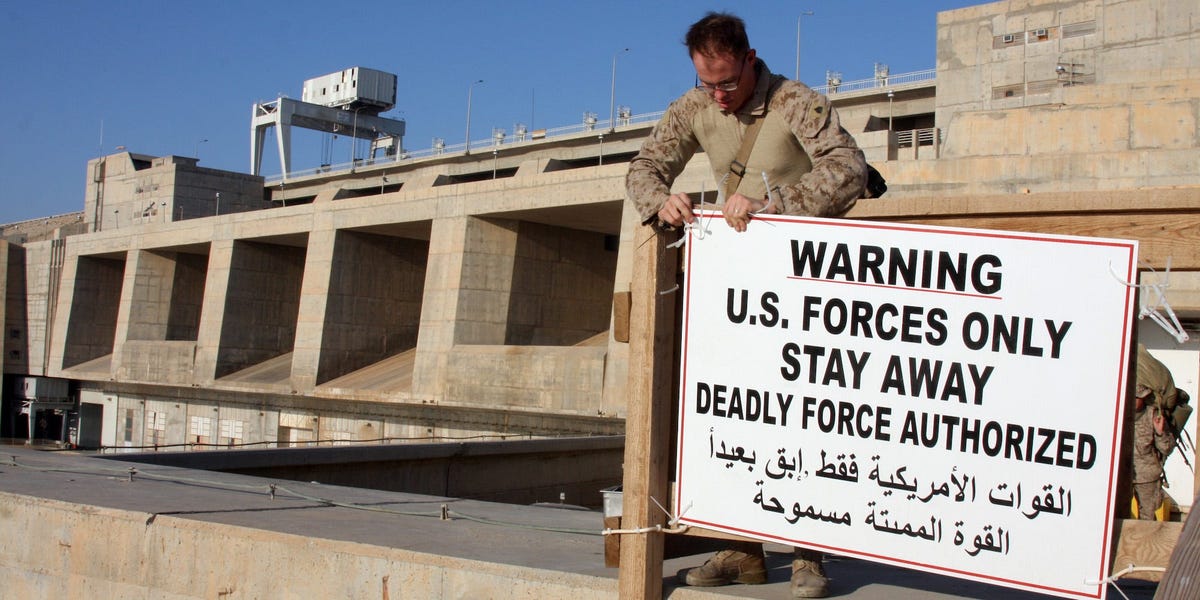 The invasion of Iraq in March 2003 was marked by a campaign of shock and awe that highlighted the undisputed conventional might of the US military. A lightning push from the south defeated Saddam Hussein’s army in just 26 days.

While the vast majority of the roughly 230,000 coalition troops came from the south, a small special operations contingent was dispatched to take on a key strategic objective near the Iraqi capital.

The ensuing four-day battle was the largest engagement of the entire war, with 22 Iraqi troops engaged for each US commando present.

Located in northwestern Iraq, Haditha Dam was a strategic target for both sides. Nearly 5 miles long and 200 feet high, the dam is one of the largest in the world and can provide electricity to hundreds of thousands of homes, even reaching Baghdad over 150 miles away.

Prior to the invasion, US planners feared Saddam would intentionally destroy the dam and flood the region in order to protect Baghdad’s northwest flank from coalition forces. The Iraqi dictator’s claims that the United States would target and destroy the dam further complicated matters.

The American commanders selected Rangers from B Company, 3rd Battalion, 75th Ranger Regiment to take the roadblock. They were complemented by a sniper / reconnaissance team from C Squadron Delta Force, while elite pilots from the 160th Special Operations Aviation Regiment, the “Night Stalkers”, would provide support. air.

Night Stalker’s small contingent of Little Bird helicopters – two AH-6 attack models and an MH-6 scout variant – would prove crucial in the battle. The MH-6 had a frontal infrared camera (FLIR) to paint the targets of the two AH-6. The MH-6 also served as a bait to attract enemy fire so the two attack birds could pounce.

“We had no warning that we would face such a fierce response from the Iraqis – none at all,” retired Chief Warrant Officer 4 Greg Coker told Insider. Coker, a Night Stalker pilot and author of “Death Waits in the Dark”, spent 30 years in uniform and completed 11 combat missions.

“Intel had informed us that there was light resistance and eight to 10 people at the dam. But there was a major Iraqi base, a force the size of a division, in the town of Haditha which housed the Fedayeen. , the Republican Guards and the Iraqi regular army, â€Coker said.

The Iraqi Republican Guard was an elite force reporting directly to Saddam, while the Fedayeen were a paramilitary force outside of the regular army.

Delta operators scouted the barrage before the main assault. The Rangers performed a rare combat jump on Serpent and captured it, allowing the rest of the force to be transported and the Night Stalkers to use it as a forward arming and supply point.

Early on the night of April 1, Rangers and Delta Force operators stormed the roadblock.

The assault proceeded as planned, with the Rangers quickly securing the barrage and securing blocking positions at the east and west entrances to the structure, while Delta operators breached the facility to remove all gear. explosives that the Iraqis could have planted.

But the fight was only just beginning. The Iraqis counterattacked with infantry, tanks and artillery, pushing the Rangers to their limits. Coker and the other Night Stalkers flew several Danger Proximity missions in support of US ground commandos.

Strikes within 200 yards of a friendly position are considered near danger. That night, the Night Stalkers fired ammunition 12 yards from the Rangers.

The pilots and crew also fired 6,000 5.56mm rounds from their personal M-4 rifles and dropped 90 M-67 fragmentation grenades, making four passes to rearm and refuel. The helicopters carried so much ammunition that they could barely hover and had to constantly move to avoid crashing.

After the Battle of “Black Hawk Down” in Mogadishu in 1993, the Night Stalkers, pilots and crew, took more deadly personal weapons, including handguns and M4 rifles.

In addition to the small arms fire on the ground – which caused serious damage to Coker’s helicopter which the team leaders mended with duct tape – the Night Stalkers had to account for anti-aircraft trucks and ground missiles – hidden air.

At one point during the four-day battle, the Iraqis attacked Serpent in an attempt to cut off Ranger support. They even launched a SCUD missile at the airfield, but the Rangers and Night Stalkers held them back.

Weather conditions, including sandstorms, began to reduce visibility and interfere with the flight of the Night Stalkers, but on the third day, an MH-47 Chinook helicopter braved enemy fire and resupplied the Rangers, who were approaching 72 hours under fire from what was intended as 24 hour operation.

On the fourth day of the battle, the Rangers suffered their first casualties in an attack that foreshadowed the coming insurgency.

A civilian vehicle approached the Ranger blockade position at one end of the roadblock. An Iraqi man got out of the vehicle and pointed to his apparently pregnant wife still in the car, shouting for US commandos to ask for water and medical assistance.

As the fire support officer and two soldiers approached the vehicle, the Iraqi couple detonated an improvised explosive device, killing themselves and the three Rangers.

But the Iraqi forces at Haditha Dam were defeated by then. American reinforcements arrived and relieved the beaten Rangers.

â€œWe always work well together as a combat team, a well-oiled machine. The 160th trains constantly with the SOF units of the army – Rangers and Delta. These are our main customers, and the 160th supports them with close air support assault and precision. We all conduct realistic training on all terrains throughout the year. A tight-knit team, “said Coker.

US intelligence estimates put the number of enemies at over 3,000, with over 1,000 killed in action and many more wounded. There were no more than 150 American commandos at the barrage during the battle, with a few dozen more at the nearby airfield.

Command Sgt. Major Greg “Ironhead” Birch, a Delta Force operator who had returned to Rangers, received the Silver Star, the third highest award for bravery under fire, for his inspiring leadership and for rescuing several wounded Iraqi soldiers who were stranded in no-man’s-land after a failed attack – a moment of humanity in the midst of the fiercest battles.

Stavros Atlamazoglou is a defense journalist specializing in special operations, a veteran of the Hellenic Army (national service with the 575th Marine Battalion and Army HQ) and a graduate of Johns Hopkins University.

Report: Iraqi militias agree not to attack US if PM Kadhimi demands withdrawal