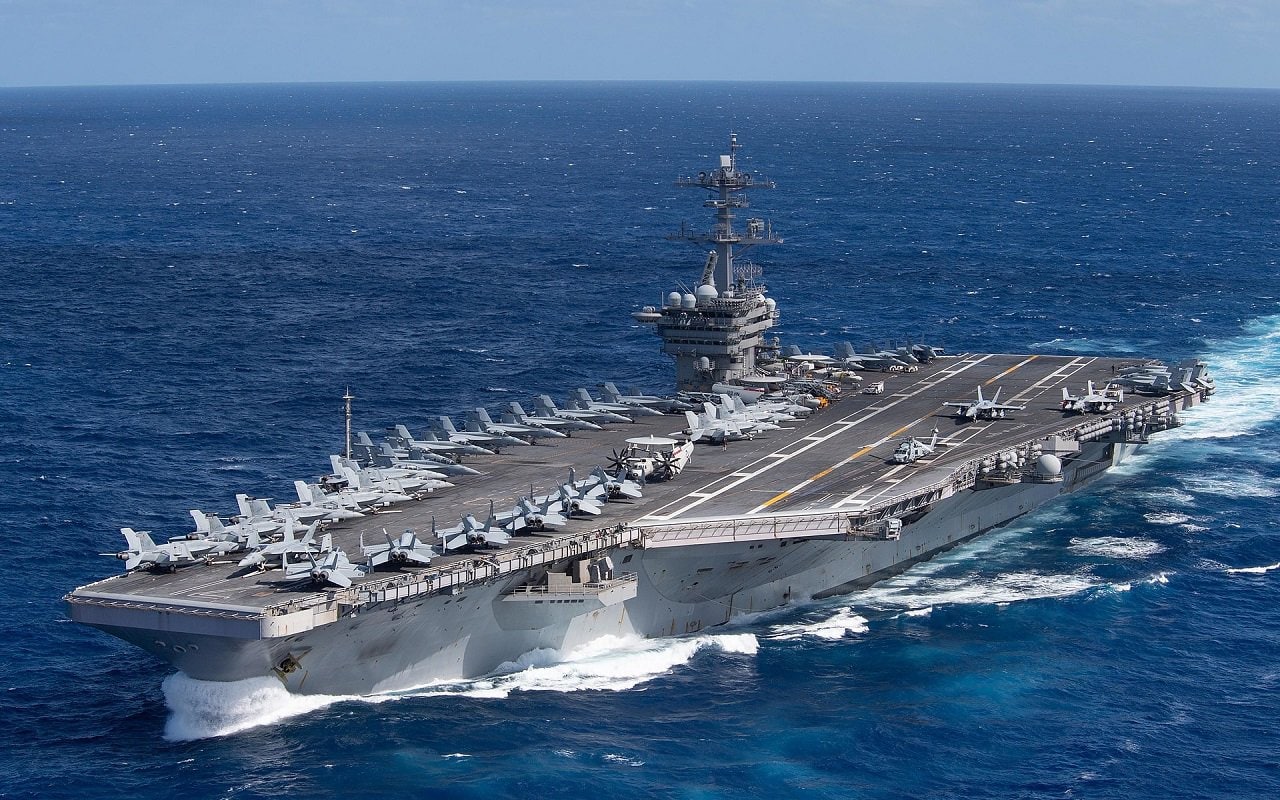 Although no battleship has ever been named in honor of the president and war hero, four ships have been named in his honor, including the fourth Nimitz-class supercarrier. She really is a special ship. USS Theodore Roosevelt (CVN-71) was the first aircraft carrier to be assembled in large sections or modules. Just like building a model, the innovative construction techniques employed with USS Theodore Roosevelt have been used on every aircraft carrier since.

This accelerated its construction and it Was launched in October 1984 and commissioned two years later in October 1986. The carrier began its first deployment in late December 1988 with Carrier Air Wing Eight (CVW-8) embarked.

However, this almost never happened. President Gerald Ford had in fact canceled the order for CVN-71 in 1976 and instead sought to build two conventionally powered aircraft carriers that could operate with vertical and/or short take-off and landing aircraft. President Jimmy Carter also initially opposed construction of the nuclear-powered aircraft carrier, but reversed course following the Iran hostage crisis, which highlighted the need for US carrier battle groups in remote areas of the world. Construction of CVN-71 was eventually authorized under the Fiscal Year 1980 (FY80) Authorization Bill for the Department of Defense (DoD).

Although named after the man who remarked that it was wise to speak softly and carry a big stick, Roosevelt was always the one who didn’t hesitate to do his part. It was therefore somewhat fitting that just over two years after entering service, the USS Theodore Roosevelt was deployed to participate in Operation Desert Shield and arrived in the Persian Gulf in mid-January 1991.

During the ensuing Operation Desert Storm, which actually began the day before the carrier arrived at the station, the ship took part in combat operations where pilots flew more than 4,200 exits – more than any other carrier. In total, aircraft operating from Theodore Roosevelt dropped over 4.8 million pounds of ammunition!

The warship’s air wing later participated in patrols during Operation Provide Comfort in support of Kurdish forces in Iraq, and then a year later in Operation Deny Flight in support of the U.S. no-fly zone in over Bosnia. CVN-71 then became one of the few nuclear-powered warships to transit through the Suez Canal when it was deployed to take part in Operation Southern Watch over Iraq.

Theodore Roosevelt began its seventh deployment immediately after the September 11, 2001, terrorist attacks on New York and the Pentagon, and joined the already present USS Company and USS Carl Vinson, and carried out attacks against al-Qaeda armed forces in Afghanistan during Operation Enduring Freedom. During their deployment in the region, Theodore Roosevelt spent a total of 160 consecutive days at sea and broke the record for the longest ongoing time by a U.S. aircraft carrier since World War II.

The carrier is also one of most decorated warships of the post-Cold War era. His awards include a Joint Meritorious Unit Award, three Navy Unit Commendations, five Battle Efficiency Awards (Battle “E”), two National Defense Service Medals, two Security Excellence Awards, and a Global War on Terrorism Expeditionary Medal, among others. The warship also received a NATO Medal as well as Kuwait Liberation Medals from Kuwait and Saudi Arabia.

The CVN-71 received the 2021 Battle Efficiency Award last March, and the Battle “E” award recognizes the high level of sustained crew proficiency and readiness to perform in an operational environment throughout one year of evaluation.

Teddy Roosevelt would no doubt be proud to have this fighter named after him, and he would certainly be proud of the ship’s crew.

Today’s editor for 1945, Peter Suciu is a Michigan writer who has contributed to more than four dozen magazines, newspapers, and websites. He writes regularly on military hardware, the history of firearms, cybersecurity and international affairs. Peter is also a Contributing author for Forbes.