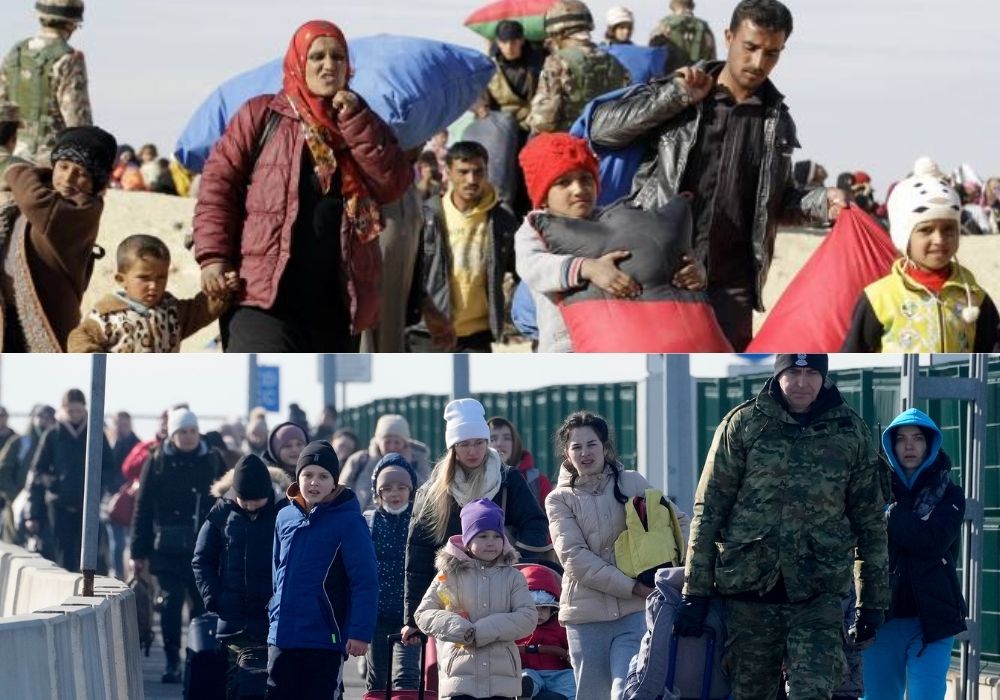 General outrage has been seen over global media coverage of the Ukrainian refugee crisis following the Russian invasion, with many pointing out that notable media anchors are not even being subtle with their racist reporting.

Multiple media anchors including AlJazeera and SCSwere seen comparing refugees from multiple conflict zones in the Middle East and North Africa (MENA) region to Ukrainians, who fled their country by the thousands amid the ongoing Russian military operation since Thursday .

In such clip who made the rounds of social networks, a AlJazeera The presenter talked about refugees trying to board a train in Ukraine. He said he was “convincing” that these refugees were “prosperous, I loathe to use the expression, middle-class people”. These are obviously not refugees trying to get away from the middle areas which are still in a great state of war, these are not people trying to get away from North Africa, they look like n’ any European family you live next to”.

In another case, a SCS anchor “But it’s not a place, with all due respect, like Iraq or Afghanistan, that has seen conflict rage for decades. It’s a relatively civilized, relatively European city – I have to choose those words carefully too – a city where you don’t expect that, or expect that to happen.

Similarly, a journalist from a French channel BFM TV said: “We are not talking here about Syrians fleeing the bombings of the Putin-backed Syrian regime, we are talking about Europeans driving off in cars that look like ours to save their lives.

BNC News also talked about how Ukrainian refugees were white and relatable. A presenter said on screen: “To put it bluntly, they are not refugees from Syria, they are refugees from neighboring Ukraine… they are Christians, they are white, they look a lot like people who live Poland.

While some racist responses came from the anchors themselves, the BBC also received angry statements from a Ukrainian official. The official said: “It’s very emotional for me because I see Europeans with blue eyes and blond hair being killed.”

The fact that for many white people, the conflict was hitting close to home because people with similar lives were turned into refugees, sparked and angered many around the world.

In response to the widespread racist coverage, the Association of Arab and Middle Eastern Journalists (AMEJA) issued a statement of condemnation. The statement called on the media to be responsible and impartial in their coverage, while expressing solidarity with all civilians affected by conflict around the world. The statement noted that “not only can such coverage decontextualize conflict, but it contributes to the erasure of populations around the world who continue to suffer violent occupation and aggression.”

The Association of Arab and Middle Eastern Journalists has just issued a statement regarding racist coverage of Ukraine that has seen dehumanizing, superior and insulting comparisons with the Middle East. @AMEJA See here + 🧵 https://t.co/S9EeL7ypnI pic.twitter.com/XAokynFoDs

Journalist Alan MacLeod posted the many cases on his Twitter account and said that “in times of crisis people often show their true colors”.

A senior producer at AlJazeera he himself was also outraged at the racist coverage, drawing particular attention to BFM TV. She said the world was being told by many speakers of European languages ​​that those in the West did not deserve war and were a “good refugee”.

“We are in the 21st century, we are in a European city and we have cruise missile fire as if we were in Iraq or Afghanistan, can you imagine!”

We are told (in many European languages) who deserves war, missiles; who is a good refugee—human.

A professor of international politics, Laleh Khalili, was also indignant Al Jazeera cover and scathingly asked if the presenter thought that being “a refugee is an existential/ontological condition”.

Responding to the CBS anchor in particular, author Lina Alhathloul said his use of the word “civilized” was jaw-dropping, but it was worse that he found it incredible that the European country was the one at war.

“Civilized” is shocking, but it gets worse when he says “it’s not a place where you expect or hope that’s going to happen”. https://t.co/gF1QKDny8d

Of all the media, AlJazeera apologized and explained that a presenter of Al-Jazeera English drawn unacceptable parallels between refugees from Ukraine and the MENA region. He noted that his comments were “insensitive and irresponsible”, adding that “the malpractice is being dealt with”.

A @AJEnglish presenter made unfair comparisons between Ukrainians fleeing war and refugees from the MENA region. The presenter’s comments were insensitive and irresponsible. We apologize to our audience worldwide and the misconduct is being addressed.

Another journalist, Hind Hassan, pointed out that journalists and politicians were not the only ones displaying racist tendencies by equating Europeans with a “civilized” group of people. She said they echoed “systemic and institutional racism, which dehumanizes ‘the other’ + is used to justify divisive politics and conflict”.

Notions that Europeans are more civilized and therefore worth supporting are not isolated opinions of rogue politicians/newspapers; what we hear is the product of systemic, institutional racism that dehumanizes “the other” + is used to justify divisive politics and conflict

True to Hassan’s words, disturbing reports have resurfaced from Ukraine of segregationist behavior in which black people have been banned from boarding evacuation trains or are biased treated at the Polish border. Many videos emerged on social media, which show black people being pushed back from trains carrying refugees to safety.